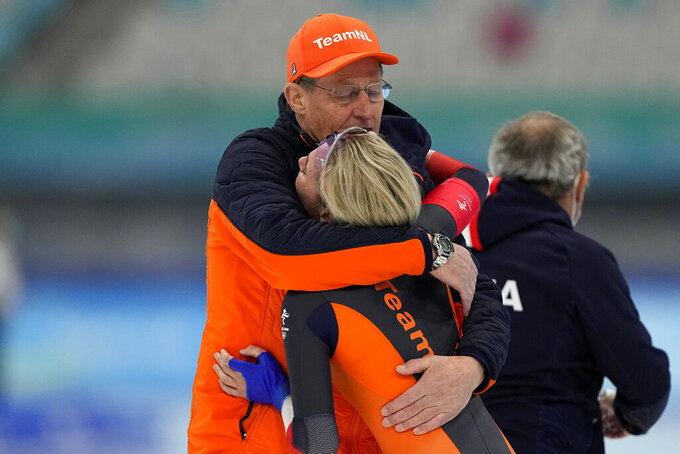 Irene Schouten of the Netherlands reacts with a coach after winning the gold medal and breaking the Olympic record in the women's speedskating 3,000-meter race at the 2022 Winter Olympics, Saturday, Feb. 5, 2022, in Beijing.(AP Photo/Ashley Landis)

BEIJING (AP) — There was no medal sweep for the Dutch in the first speedskating event of the Beijing Olympics.

Irene Schouten made sure they kept the top spot on the podium.

Shaking off the pressure of being the heavy favorite, Schouten broke a 20-year-old Olympic record to win the women's 3,000 meters Saturday.

She turned in a blazing final lap while skating in the last of 10 pairs to finish in 3 minutes, 56.93 seconds.

“I had a lot of pressure from not only the medalists but also from myself,” said Schouten, who has dominated the long-distance events on the World Cup circuit this season. “I made it, so I was really happy.”

She broke the previous Olympic mark of 3:57.70, set by Germany's Claudia Pechstein at the 2002 Salt Lake City Games.

In a fitting bookend, Pechstein skated in the opening pair to become the oldest female athlete in Olympic history at 49. The German finished last — more than 20 seconds behind the winner.

Italy's Francesca Lollobrigida raced Schouten in the final pair, pushing the pace early and hanging on at the end to take the silver in 3:58.06. The three-time Olympian is the great-niece of 94-year-old actress Gina Lollobrigida, who was an international star in the 1950s and '60s.

“To be in the last pair with Irene, I was quite happy," the runner-up said. “I knew she's the best, so I wanted in the beginning to be in the front and try to keep close to her at the finish line. I'm quite happy. This silver medal is kind of gold for me.”

The bronze went to Canada's Isabelle Weidemann in 3:58.64.

Martina Sablikova of the Czech Republic, the winner of six Olympic medals including three golds, held the top spot with two pairs to go but failed to make the podium. She wound up fourth in 4:00.34.

Defending champion Carlijn Achtereekte of the Netherlands crossed the line in 4:02.21 — exactly 3 seconds off her gold medal-winning time from four years ago.

She finished seventh this time, one spot ahead of the third Dutch skater, Antoinette de Jong.

The Dutch didn't come close to duplicating their medal sweep in the 3,000 at the 2018 Games, but Schouten made sure it was golden start for the world's speedskating powerhouse.

The event was held before a sparse, quiet crowd that felt more like a training session at the dazzling National Speed Skating Oval, better known as the Ice Ribbon for its distinctive outer facade.

The 12,000-seat Ice Ribbon was the only new venue built at the Olympic Green for this year's Beijing Games, constructed on the northern edge of the park at the site of the field hockey and archery fields for the 2008 Summer Games.

To Mia Manganello-Kilburg, an American who finished 19th, it hardly felt like an Olympics.

“Not at all,” she said. “It felt like just another training race. You definitely miss that crowd, for sure.”

Pechstein didn't mind a bit. She became just the second athlete — and first woman — to compete in eight Winter Games. She raced less than 24 hours after carrying the flag for Germany in the opening ceremony.

“I am the only woman in the whole world to be at eight Olympic Winter Games,” she said. "The result of today was not so important. It was just to race and to be here. I am super proud.”

Pechstein's career includes nine Olympic medals and a two-year doping ban, which she continues to fight in court. She tied Japanese ski jumper Noriaki Kasai for the most Winter Olympics.

Still, she smiled and waved toward the stands to a smattering of applause.

"I was not too fast, but I smiled because today I got my goal to race in my eighth Olympic Games,” Pechstein said. “This was important for me.”

The Dutch have dominated at the last two Olympics, though there is expected to be more variety on the medal podium this time around.

Japan, Canada, the Russian team, China, the United States and Italy are eager to take a crack at the orange-clad powerhouse, which was denied having its passionate, flag-waving fans in the stands because of the host country's COVID-19 restrictions.

“It's so good for the sport when you have lots of women in contention for medals,” Weidemann said. “Irene has been undefeated this year, so I think her winning gold is pretty expected. But there are quite a few women that I think can push those top spots. It's very exciting to be a part of it.”

Four years ago in Pyeongchang, the Netherlands claimed seven golds and 16 medals overall — 10 more than any other country. At the 2014 Sochi Games, they won 23 of the 36 available medals, including eight golds.

The Americans haven’t won an individual speedskating medal since 2010, though the World Cup success of Erin Jackson, Brittany Bowe and Joey Mantia provides hopes they’ll break the drought at some point in Beijing.