Shiffrin fastest in training ahead of Olympic combined race 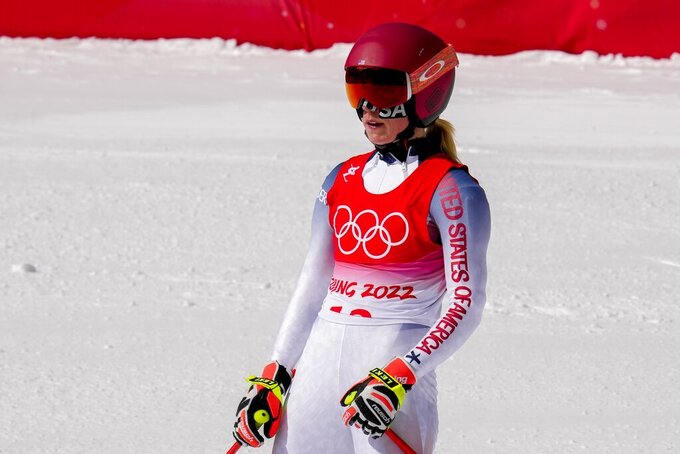 Mikaela Shiffrin, of the United States, after finishing the women's downhill at the 2022 Winter Olympics, Tuesday, Feb. 15, 2022, in the Yanqing district of Beijing. (AP Photo/Luca Bruno)

BEIJING (AP) — Mikaela Shiffrin geared up for the Olympic Alpine combined by setting the fastest time in a downhill training session on Wednesday.

The two-time Olympic champion so far has failed to win a medal at the Beijing Games, skiing out in the giant slalom and the slalom — the two events she has gold medals in — and finishing ninth in the super-G and 18th in Tuesday’s downhill.

Next up is Thursday's combined race, which adds the times from one downhill run and one slalom run.

Shiffrin is the world champion in combined and also won silver in the event at the 2018 Pyeongchang Games.

The 26-year-old Shiffrin is far less experienced in the downhill but finished Wednesday’s training session 0.93 seconds ahead of Wendy Holdener of Switzerland.

“I mean, of course everyone thought Mikaela will have a medal until now but that shouldn’t be a bad thing,” said Holdener, who won bronze in the slalom last week to add to her silver in that event from Pyeongchang.

“It shows that skiing is a really difficult sport. You have to perform each day, you don’t know how the course is, how the slope is, so it’s really difficult. I guess that’s the reason.”

Ledecka is attempting to win a second event at a second straight Olympics after successfully defending her gold in snowboarding’s parallel giant slalom.

Only 14 skiers took part in the training session on Wednesday, with 12 of those listed on the start list opting out.