Timeline of NBA in 1980s as league celebrates 75th season 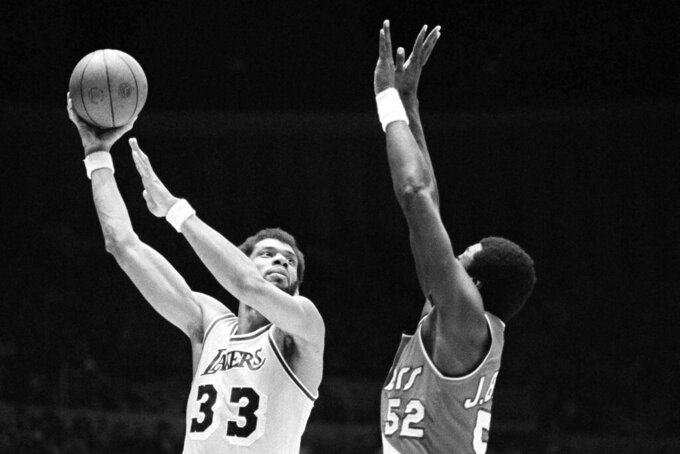 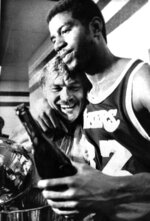 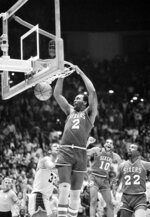 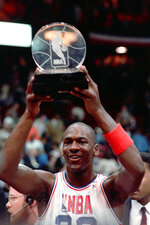 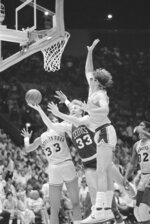 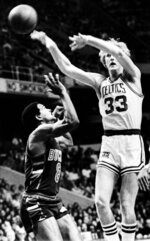 Timeline of the National Basketball Association during the 1980s. The timeline includes milestone moments in the league’s history and key moments off the court as the NBA celebrates its 75th season:

Feb. 22, 1980: The U.S. men’s ice hockey team beats the Soviet Union 4-3 in the Olympic semifinals in Lake Placid, N.Y. to claim one of the biggest upsets in sports history. The Americans beat Finland two days later in the final to win gold.

March 21, 1980: United States President Jimmy Carter announces the Americans will boycott the Summer Olympics in Moscow in protest of the Soviet Union’s invasion of Afghanistan.

May 16, 1980: Rookie Earvin “Magic” Johnson steps in and plays center for the injured Kareem Abdul-Jabbar in Game 6 of the NBA Finals with his Los Angeles Lakers holding a 3-2 series lead over the Philadelphia 76ers. Johnson, a 6-foot-9 point guard, finishes with 42 points, 15 rebounds and seven assists to help the Lakers clinch the title with a 123-107 win over the Philadelphia 76ers.

Jan. 20, 1981: Americans held hostage by militarized Iranian students for 444 days are released minutes after Ronald Reagan was inaugurated as U.S. president. The 52 diplomats and citizens were held after the students took over the U.S. Embassy in Tehran on November 4, 1979.

May 31, 1983: After Philadelphia went a league-best 65-17 in the regular season, Moses Malone predicted the 76ers would sweep the playoffs and win the NBA title, saying they’ll win each series in four games -- “Fo, Fo, Fo.” He wasn’t that far off -- the 76ers lost just once on their way to the title. They swept the Lakers in the NBA Finals to avenge losses to Los Angeles in 1980 and 1982.

1983: Philadelphia’s Moses Malone wins his third and final MVP award all in a five-year span. He won the first two with the Houston Rockets. One of the most successful players to skip college and go pro, he averaged 22.7 points and 13.4 rebounds that season.

June 12, 1984: The Boston Celtics beat the Los Angeles Lakers 111-102 in Game 7 in the first NBA Finals between Boston’s Larry Bird and Los Angeles’ Magic Johnson. They would meet in the Finals two more times, with the Lakers winning both.

June 19, 1984: One of the best drafts in NBA history. Akeem Olajuwon is the No. 1 pick with Michael Jordan at No. 3 after Portland infamously chooses Sam Bowie at No. 2 over Jordan. Bowie had an injury-shortened career. Charles Barkley, John Stockton, Otis Thorpe, Alvin Robertson, Kevin Willis and Sam Perkins were other notable players in that draft.

May 8, 1984: The Soviet Union announces it will boycott the Summer Olympics in Los Angeles. The Soviets cited safety concerns. U.S. President Ronald Reagan called it political.

April 1, 1985: The first Air Jordan shoe was released to the public.

June 8, 1985: The Los Angeles Lakers defeat the Boston Celtics 111-100 in Game 6 of the NBA Finals, making it the first time in nine tries that the Lakers beat the Celtics in a finals series. Kareem Abdul-Jabbar was named NBA Finals MVP at age 38.

April 20, 1986: Michael Jordan scores a playoff-record 63 points in a 135-131 double-overtime loss to the Boston Celtics. He broke Elgin Baylor's record of 61 points set in 1962. The record still stands. He couldn’t stop Boston from making its own bit of history. The Celtics tied a single-season league record of 33 consecutive home victories, including playoffs, set by the Minneapolis Lakers in 1949-50.

May 21, 1986: Ralph Sampson’s tip-in at the buzzer rattles in, lifts Houston past the Los Angeles Lakers and vaults the Rockets into the NBA Finals. The Lakers had reached the Finals the previous four years, but the Rockets, featuring the “Twin Towers” — the 7-foot-4 Sampson and 7-footer Akeem Olajuwon — won the series 4-1. The Boston Celtics beat the Rockets in the Finals.

May 29, 1986: Larry Bird wins his third straight MVP award. No one has won three in a row since. Bill Russell and Wilt Chamberlain are the only others to do it.

July 4, 1986: Rappers Run-DMC and rock band Aerosmith release their collaboration, “Walk This Way.” The song eventually reached No. 4 on the Billboard charts and helped bring rap into the mainstream.

Sept. 8, 1986: The Oprah Winfrey Show debuts. During its 25-year run, it becomes the highest-rated daytime talk show in television history.

Nov. 22, 1986: Mike Tyson beats Trevor Berbick by TKO in the second round to win the WBC title and claim his first championship belt at age 20. He won his first 37 fights, many with spectacular knockouts, until getting upset by Buster Douglas in 1990. He was a household name, and his fame spawned the Nintendo game “Mike Tyson’s Punch-Out!!” In 1987.

March 29, 1987: Hulk Hogan bodyslams 520-pound Andre the Giant and successfully defends his World Wrestling Federation title in front of 93,173 fans at WrestleMania III in the Pontiac Silverdome. Vince McMahon Jr.’s WWF built momentum in the mid ’80s with the growth of “Hulkamania” and wrestling’s connection with MTV. Led by stars such as Hogan, “Rowdy” Roddy Piper, “Macho Man” Randy Savage and The Ultimate Warrior, the WWF carved out a huge place in ’80s pop culture.

June 12, 1987: President Ronald Reagan stands at the Berlin Wall and calls for Soviet Union leader Mikhail Gorbachev to take action, saying, “Mr. Gorbachev, tear down this wall!” The wall, which East Germany started building in 1961, split Berlin in half and became symbolic of the split between the communist Eastern Bloc, led by the Soviets, and the largely democratic Western Bloc, led by the United States. The wall eventually came down in 1989 and 1990.

1988: Michael Jordan wins the first of his five MVP awards and is named defensive player of the year. He led the league in scoring and steals and was the slam dunk champion and All-Star Game MVP.

May 22, 1988: Boston’s Larry Bird and Atlanta’s Dominique Wilkins duel in Game 7 of the Eastern Conference semifinals. Bird scored 34 points to help the Celtics claim a 118-116 win. Wilkins scored 47 points in the loss. Bird averaged 26.4 points, 7.7 rebounds and 6.4 assists in the series while Wilkins averaged 31.3 points and 5.4 rebounds.

June 21, 1988: The Los Angeles Lakers win their fifth title of the 1980s. Kareem Abdul-Jabbar wins his sixth NBA title at age 41 to go with his six MVP awards.

Sept. 28, 1988: The United States men’s basketball team, with a team of amateurs, loses to the Soviet Union in the Olympic semifinals. In 1989, FIBA changed its rules allowing NBA players to participate. That led the U.S. to form the Dream Team that dominated at the 1992 Games.

May 7, 1989: Michael Jordan’s hanging jump shot over Cleveland’s Craig Ehlo beat the buzzer and gave the Chicago Bulls a 101-100 playoff win over the host Cavaliers. Jordan drove left, pulled up near the free-throw line, outlasted Ehlo in the air and drained the game-winner. Jordan’s celebratory leap and fist pump as Ehlo crumples to the ground is iconic. The win clinched the first-round Eastern Conference playoff series 3-2.

June 13, 1989: Isiah Thomas leads the “Bad Boy” Detroit Pistons to the top as they beat the Los Angeles Lakers in the NBA Finals. No team other than the Celtics and Lakers had won a title since Philadelphia claimed the title in 1983. The Pistons won again in 1990.

Oct. 17, 1989: The Loma Prieta earthquake hits as the San Francisco Giants and Oakland Athletics prepared for Game 3 of the World Series at San Francisco's Candlestick Park. The quake was measured as a magnitude 6.9 and affected both Oakland and San Francisco. It killed more than 60 people and collapsed part of the Bay Bridge. The World Series was postponed for 10 days.

Dec. 3, 1989: U.S. President George Bush and Soviet Union leader Mikhail Gorbachev meet and declare the end of the Cold War at a summit in Malta.