Valieva tumbles out of the medals in Olympic figure skating 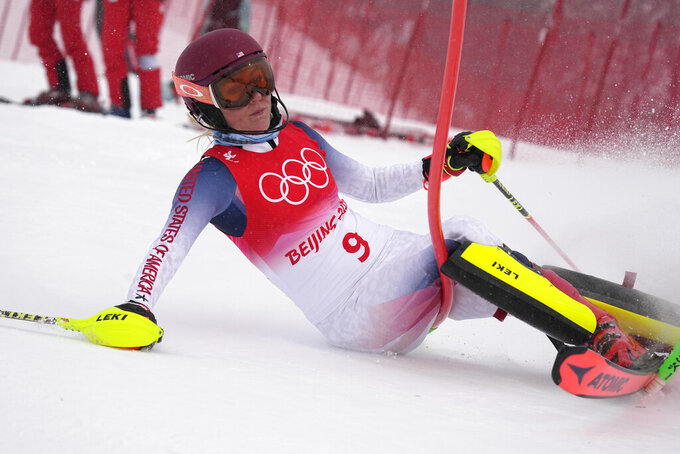 Mikaela Shiffrin of the United States crashes out during the women's combined slalom at the 2022 Winter Olympics, Thursday, Feb. 17, 2022, in the Yanqing district of Beijing. (AP Photo/Robert F. Bukaty)

BEIJING (AP) — Bing Dwen Dwen stuffed pandas are already in the hands of the top three finishers in the women's figure skating competition at the Beijing Olympics. The medals are coming Friday.

Heavily favored Russian teen Kamila Valieva fell twice and had two other big mistakes in her free skate on Thursday, dropping to fourth place and allowing the International Olympic Committee to avoid what could have been one of the most awkward moments in the history of the Games.

Valieva was permitted to skate despite failing a doping test weeks before the Beijing Games. She was the leader after the short program but faltered badly in the free skate and teammate Anna Shcherbakova won the gold medal after a near-flawless program. Russian teammate Alexandra Trusova won the silver and Kaori Sakamoto of Japan took the bronze.

Valieva looked dejected and put her face in her hands after her program. She sobbed in the kiss-and-cry area.

Minutes later, the three medalists received stuffed pandas — the Beijing Games mascot — in the flower ceremony. The medals ceremony will be held Friday night. The IOC indicated that because Valieva is at the center of a doping scandal that is still under investigation, neither ceremony would have been held if she finished in the top three.

Earlier Thursday, American star Mikaela Shiffrin skied out for the third time in five races, guaranteeing that she will leave Beijing without any individual medals. She was fifth after the first leg of the Alpine combined, the downhill, but then missed a gate just seconds into the slalom run and landed on her hip.

The 15-year-old Valieva put a jolt into the Beijing Games when she landed the first quadruple jumps by a woman at the Olympics and helped the Russians win the gold medal in the team event last week.

There was no such magic Thursday. She stumbled on her opening quad, fell on two other quads and spun out on another jump.

Valieva tested positive for a banned heart medication at the Russian championships in December. The result wasn’t announced until last week, shortly after the team event.

She was cleared to compete earlier this week by the Court of Arbitration for Sport, which ruled among other things that she had protected status as a minor and would suffer “irreparable harm” if she was not allowed to perform. The court did not rule on the full scope of the case, leaving that to a more comprehensive investigation later.

IOC President Thomas Bach skipped the free skate competition. He has offered Olympic torches to the U.S. figure skaters who won team silver medals as a holdover gift while they await the resolution of the doping case, The Associated Press learned late Wednesday.

Mikaela Shiffrin arrived in the mountains above Beijing heavily favored to add to her career haul of two gold medals and one silver. After entering all the individual events, she was a startling 0 for 5 with three DNFs — Did Not Finish. Among the races she skied out of were her two best events, the giant slalom and the slalom. The two times she made it all the way down the course, she finished ninth in the super-G and 18th in the downhill.

She had a promising run in the downhill leg of the combined, but then she missed a gate and fell just seconds into the slalom run.

Shiffrin sat for a few moments in the snow alongside the course. When she eventually got up, she shook her head, then looked up at the hill.

Shiffrin has said she plans to appear in a sixth race on Saturday, a team event that was added to the Olympics four years ago.

With “Captain Clutch" Marie-Philip Poulin scoring twice, Canada regained its place atop the women’s hockey world by beating the rival United States 3-2 in the gold-medal game.

Poulin scored her third Olympic gold-medal clinching goal. She won golds in her first two Olympics, at Vancouver and Sochi, before Canada lost to the United States at the 2018 Pyeongchang Games.

“I just got shivers,” she said.

The Americans settled for their fourth silver medal, with all losses coming against Canada.

Miho Takagi of Japan won the women's 1,000 meters for her fourth speedskating medal of the Beijing Games and the first individual gold of her career. Jutta Leerdam of the Netherlands won the silver while Brittany Bowe of the United States claimed the bronze for her first individual career medal.

NO REPEAT FOR SHUSTER

Skip John Shuster and the American men’s curling team won’t repeat as Olympic gold medalists. The Americans lost to Britain 8-4 in the semifinals and were dropped into the bronze-medal game against Canada. Sweden beat Canada 5-3 and will play Britain for the gold.

Team Shuster had a dramatic run to the gold medal in 2018, the first ever for the United States.

World champion Sandra Naeslund of Sweden ended Canada’s reign in the women's skicross when she held off Marielle Thompson. Third-place finisher Fanny Smith of Switzerland was moved to last place and Daniela Maier of Germany was awarded the bronze after a review showed that Smith impeded Maier.