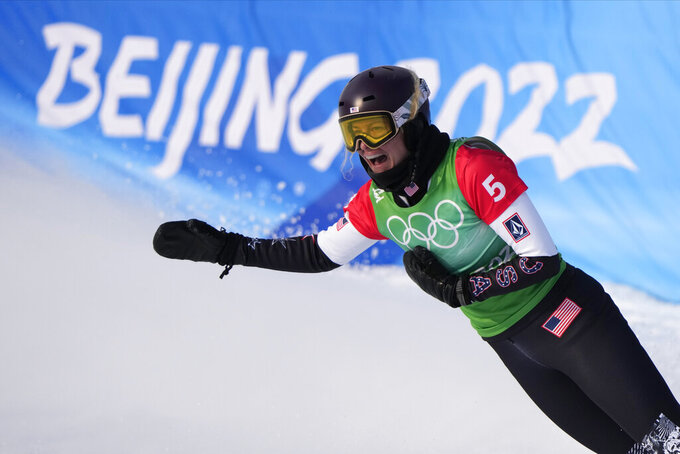 BEIJING (AP) — Mixed team snowboardcross is a variation on that chaotic event that is making its Olympic debut this year.

Each team consists of one man and one woman. The men go first, then the women start in a staggered fashion, based on how the men finished in their race. NBC is planning to show the mixed snowboardcross final live in prime time Friday night.

Elsewhere, the U.S. men's hockey team faces Canada, and the quarterfinals continue on the women's side.

A majority of the Winter Olympic sports now have events in which men and women compete as teammates. The mixed snowboardcross starts with the quarterfinals at 9 p.m.

The U.S. has already won multiple gold medals in snowboarding — Lindsey Jacobellis in snowboardcross and Chloe Kim in the halfpipe.

The U.S. men's hockey team opened the Olympic tournament with an 8-0 rout of host China. Now the Americans face a Canadian team that always has high hopes. That game will air live at 11 p.m. on USA Network.

Canada started fast with a 5-1 win over Germany, the 2018 silver medalist.

“It was a great start and it was everything you hope for happens," said Canada's Alex Grant, who scored the opening goal in that game. "Anytime you get a start like that it is nice. It was overall a solid performance.”

Canada's women's team faces Sweden in the quarterfinals. USA Network will have live coverage of that at 9:40 a.m. At 11 p.m., CNBC will show another quarterfinal between Switzerland and the Russians live.

Sweden's Nils van der Poel, the 5,000-meter speedskating champion last weekend, had some choice words for the Dutch, saying he'd read an article on a Dutch website that suggested the world’s strongest team was using a scientist to try to make sure the Ice Ribbon oval was set up to its advantage.

Van der Poel said he wasn't criticizing his Dutch rivals, but it remains to be seen if there's any lingering animosity in the 10,000, which includes van der Poel and Dutch standouts Jorrit Bergsma and Patrick Roest.

NBC is showing the 10,000 in the afternoon, and USA Network will also have coverage of it.

Christopheer Grotheer of Germany was the fastest in both heats Thursday, giving himself a lead of 0.7 seconds over fellow German Axel Jungk heading into the final two slides.

Arianna Fontana of Italy, the 500-meter champion in short track speedskating, races again in the 1,000. USA Network will show the final live in the morning, and NBC will air it in prime time. ... USA Network is showing the men's 15km cross-country skiing race live, early in the morning at 2 a.m. It will also air it later in the day, and NBC will show it in the afternoon. ... NBC will show women's downhill training live in prime time.