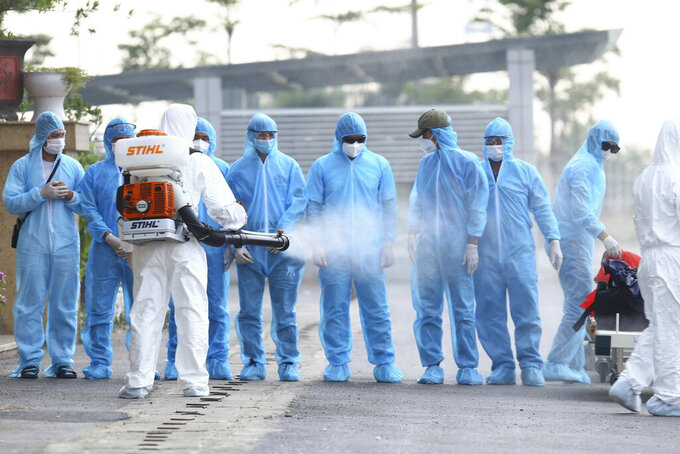 A health worker disinfects arriving Vietnamese COVID-19 patients at the national hospital of tropical diseases in Hanoi, Vietnam on Wednesday, July 29, 2020. The 129 patients who were working in Equatorial Guinea were brought home in a repatriation flight for treatment of the coronavirus. (Bui Cuong Quyet/VNA via AP)

HANOI, Vietnam (AP) — A plane carrying 129 Vietnamese citizens diagnosed with COVID-19 arrived in their homeland from Equatorial Guinea on Wednesday, with the patients immediately transferred to a hospital for treatment, the government said.

The patients, who were accompanied by four doctors and nurses, were in stable condition after the 12-hour journey from Bata, the capital of the Central African country.

On a video aired by national broadcaster VTV, the patients, all in blue protective gear, chanted “Thank you Vietnam for bringing us home” while the flight crew waved Vietnamese flags as they walked down from the plane to the tarmac at Hanoi's airport.

The patients, who were construction workers in Equatorial Guinea, were taken to a hospital along with 100 other passengers and the flight crew, who will be quarantined for 14 days.

Prior to the patients' arrival, the hospital had cleared out the facility's 500 beds to treat the new cases, VTV said.

“We have moved all non-COVID-19 patients being treated at the hospital to other branches to avoid the risk of cross infections,” said the hospital director, Dr. Pham Ngoc Thach.

Meanwhile, Vietnam’s government said Wednesday that it was stepping up measures against the coronavirus as the country’s first domestic outbreak in more than three months continues to spread.

Starting from a hospital in the popular beach city of Da Nang, 34 cases have been confirmed over the past five days, including 12 on Wednesday, according to the Health Ministry.

The cases confirmed Wednesday included an American who had been a patient last week at the Da Nang hospital and his companion, who had then moved to another hospital in Ho Chi Minh City. The ministry said there was also one case each in Hanoi, the capital, and Daklak in the central highland coffee region.

“The outbreak this time has a high risk of spreading to other big cities and provinces around Da Nang,” Prime Minister Nguyen Xuan Phuc said at the government’s daily COVID-19 meeting.

In Hanoi, health officials disinfected the residence and workplace of the infected man, who had recently returned from Da Nang after a family vacation. The alley leading to his house and the pizza restaurant where he works were cordoned off and his contacts were quarantined and tested for the virus.

The government estimates that tens of thousands of domestic tourists cut short their vacations and left Da Nang after the report of the outbreak there.