At 17, Gio Reyna prepares for US debut with dad's help 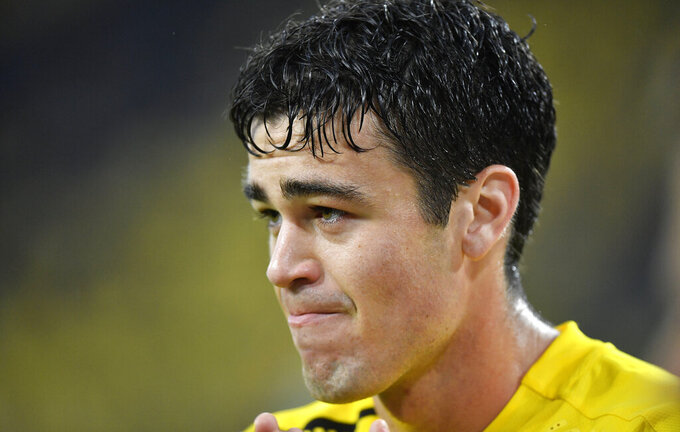 FILE - This Oct., 3, 2020, file photo shows Dortmund's Giovanni Reyna watching during the German Bundesliga soccer match between Borussia Dortmund and SC Freiburg in Dortmund, Germany. Gio Reyna, a son of former U.S. captain Claudio Reyna, got his first call-up to the U.S. national soccer team. The Borussia Dortmund midfielder is part of a 24-man roster for exhibitions at Wales on Nov. 12 and against Panama four days later in Austria. (AP Photo/Martin Meissner, File) 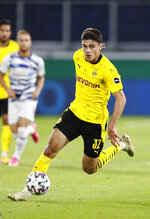 Even before his likely U.S. debut on Thursday night, Gio Reyna will have outdone his parents in one respect.

He will be one day shy of his 18th birthday when the Americans play an exhibition against Wales in Cardiff.

Claudio Reyna was 20 years, 5 months, 26 days when he made the first of 112 national team appearances as a 61st-minute substitute in an exhibition against Norway at Tempe, Arizona, on Jan. 15, 1994.

And Gio's mom Danielle Egan was 19 years, 6 months, 14 days when she made the first of six international appearances in a friendly against Germany at Agai, Cyprus, on March 14, 1993.

“Gio and his dad have a very similar grace to them, how they move around the field. Gio and Claudio both kind of just move around the field in a very fluid way,” said U.S. coach Gregg Berhalter, a defender who played alongside Claudio for a dozen years. “I know Claudio was really competitive. You can see Gio also has that competitive fire in these games that we’ve been watching from Dortmund. You can see how badly he wants to win the games.”

Just 11 players have debuted for the U.S. men before turning 18, none since Christian Pulisic four years ago.

Reyna, a forward for Borussia Dortmund, could join the group alongside Valencia midfielder Yunus Musah, whose 18th birthday is Nov. 29. They are among 10 players on the 24-man roster who could make debuts as the Americans play for the first time since Feb. 1 in a year largely lost due to the coronavirus pandemic.

“It’s more just tips that my dad’s been giving me and my mom’s more on the effort side,” Gio said Wednesday. “When I’m not putting enough effort, she’s keeping me out of line, making me work harder. My dad’s always just been there to watch my trainings, my games, and after every game we talk about the game, how it went. They’re really just there to help me every way possible. And especially my dad, on the field, he kind of gives me the tips I need or gives me ideas from the game that we talk about, and next time I try to do it better.”

The Reynas will be the sixth father-son pair to play for the U.S. after Jim and George Brown, Harry and Ty Keough, Joe and Philip Gyau, Joe and Alain Maca, and Tim and Taylor Twellman.

Claudio Reyna and Egan met when the U.S. men and women both trained at Mission Viejo, California, ahead of the 1994 men’s World Cup, and they got married in 1997. She scored one goal and he scored eight, becoming the only man to captain the Americans at two World Cups, in 2002 and 2006.

Gio was born in 2002, during his father’s final season with Sunderland, before a move to Manchester City. His father finished his playing career with Major League Soccer’s New York Red Bulls in 2007 and ’08, and worked as sporting director of New York City from 2013-19 and expansion Austin since as it prepares to start play next season.

Claudio and Danielle won’t be at Liberty Stadium.

“It’s a bummer,” Gio said. “They’re actually in Germany at the moment. They’ll be watching from there.”

He doesn’t have much recollection of his father’s playing days.

“Just a few from when he was playing in MetLife for Red Bull,” Gio said. “And also some very, very small, vague memories from Man City. But that’s really it.”

Reyna made his senior team debut for Dortmund on Jan. 18 at Augsburg, becoming the youngest American in the Bundesliga at 17 years, 66 days. He scored his first goal Feb. 4 in a German Cup match at Werder Bremen.

Reyna became the youngest American to appear in a European Champions League match at 17 years, 3 months, 5 days when he entered in the second half against Paris Saint-Germain on Feb. 18, beating the previous mark set when Pulisic was four days shy of his 18th birthday for Dortmund on Sept. 14, 2016.

He got his first Bundesliga start June 20 at Leipzig in the next-to-last league match of last season. He had another breakthrough against Freiburg on Oct. 3, becoming the first 17-year-old with three assists in a Bundesliga match.

“He’s had great experience and exposure with Dortmund,” said 22-year-old American midfielder Weston McKennie, who had a close view of Reyna at Schalke last season before transferring to Juventus. “He is quick on the ball. He’s doing what he is what is meant to be doing and he’s excelling at it as well, which is really amazing for a kid of his age.”

After failing to reach the 2018 World Cup, the Americans head into the start of 2022 qualifying next September with a young core that includes Pulisic, McKennie, Reyna, 21-year-old Leipzig midfielder Tyler Adams and 20-year-old Barcelona outside back Sergiño Dest.

Many older players in the pool were bypassed for the game against Wales and next Monday’s friendly against Panama at Wiener Neustadt, Austria.

“We’re so close to the ages of the kids that are coming in,” McKennie said, “that it’s a little hard for them to look at us as like an authority figure, as a person that they really have to pay attention or listen to whenever they try to give them advice or say something.”

NOTES: Pulisic will miss the match with a hamstring injury sustained during a prematch warmup with Chelsea on Oct. 31.