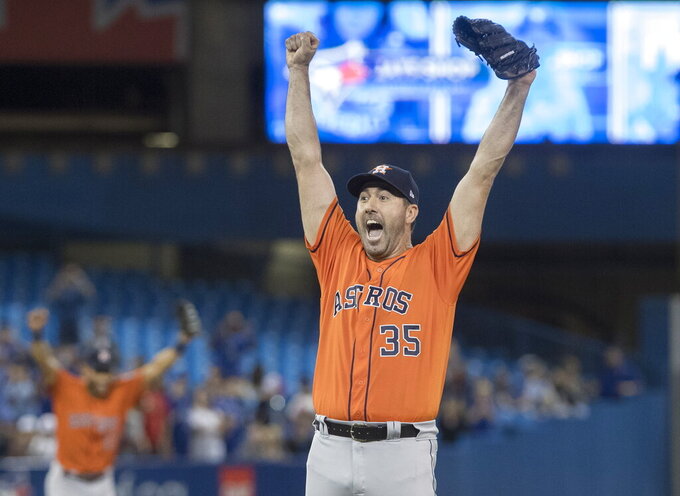 FILE - In this Sept. 1, 2019, file photo, Houston Astros starter Justin Verlander reacts after pitching a no-hitter against the Toronto Blue Jays in a baseball game in Toronto. Only 60 games into last season for the Houston Astros last summer, Justin Verlander won nine games and struck out 103 batters and went on to win his second AL Cy Young Award. (Fred Thornhill/The Canadian Press via AP, File) 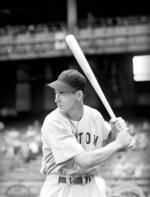 Cody Bellinger was well on his way to becoming the National League MVP only 60 games into last season for the Los Angeles Dodgers, already with 20 homers in that stretch before his 24th birthday.

Over that same span for the Houston Astros last summer, Justin Verlander won nine games and struck out 103 batters on the way to his second AL Cy Young Award. The veteran right-hander had more wins and strikeouts through the first 60 games for the American League champions than he did just over one-third of the way into the 2011 season for the Detroit Tigers, when he finished 24-5 and was also the AL MVP.

After 60 games this year, it will already be time to determine who wins those awards. There will be no more games to be played in a regular season that's set to begin July 23 and is 102 games shorter than usual because of the coronavirus pandemic.

Bellinger was only the fifth MVP from either league over the past 20 seasons to have 20 homers in his team's first 60 games — Barry Bonds did it twice, and the last to do it had been Bryce Harper with the Washington Nationals in 2015. The Dodgers were 41-19 and already with a big lead in the NL West, with Bellinger hitting .376 with 52 RBIs. He finished at .305 with 47 homers and 115 RBIs two years after being the NL Rookie of the Year.

When Bonds set the single-season record with 73 homers in 2001, the first of his four consecutive MVP seasons, baseball's home run king also had the best 60-game start in the majors over the past 100 years with 32. The best such start for an active hitter was the 25 for three-time NL MVP Albert Pujols in 2006, though Ryan Howard won the MVP that season.

Only one Cy Young winner over the past 20 seasons has had more than the nine wins Verlander had after 60 games last year. Randy Johnson was 10-1 with 139 strikeouts through his first 13 starts over Arizona's first 60 games in 2000, when he won the second of his four consecutive NL Cy Young Awards.

Only three Cy Young winners since 2000 have gotten through their team's first 60 games, generally 12 or 13 starts, without losing a game. The last was Max Scherzer for the Tigers in 2013, when he was 8-0 with a 3.24 ERA and 100 strikeouts through 12 starts. He finished 21-3, matching the fewest losses overall for any Cy Young winner in that stretch.

Brandon Webb was 8-0 through 13 starts for Arizona on way to being the 2006 NL Cy Young winner, two years after Roger Clemens went 9-0 starting 12 of Houston's first 60 games and won the NL award before the Astros switched leagues.

Justin Morneau likely wouldn’t have been the 2006 AL MVP if that season had ended after 60 games, when he was hitting .240 with 13 homers and 43 RBIs. That included his two homers and five RBIs in Minnesota's 60th game, the first of five consecutive multi-hit games to start a tear when he hit .364 the rest of the season to finish at .321 with 34 homers and 130 RBIs.

Three years later, Twins teammate Joe Mauer was hitting .415 through 60 games in his MVP season, when the Twins again had a losing record at that point before winning another AL Central title. Mauer ended at .365 with 28 homers and 96 RBIs.

Mauer and Morneau have the highest and lowest batting averages for any MVP through 60 games since 2000.

When Rod Carew was the AL MVP in 1977 with the Twins, the Hall of Fame left-handed hitter finished with a career-best .388. That was also his exact average after 60 games, though he peaked at .411 between then and the end of the season.

In 2008, nine years after Chipper Jones was the NL MVP, he was hitting .409 through Atlanta's first 60 games. The Hall of Fame third baseman hit a majors-best and career-high .364 that season.

Gwynn and George Brett are the only players who have finished within 10 points of a .400 season since Ted Williams had the last one in 1941. Williams hit .406, only one point lower than he was through Boston's first 60 games that season.

Brett was at .337 through 54 games for the Kansas City Royals in 1980 before missing a month because of an ankle injury. He returned to hit .421 over the last half of the season, and was at .400 overall on Sept. 19 before finishing at .390 for the AL champions.