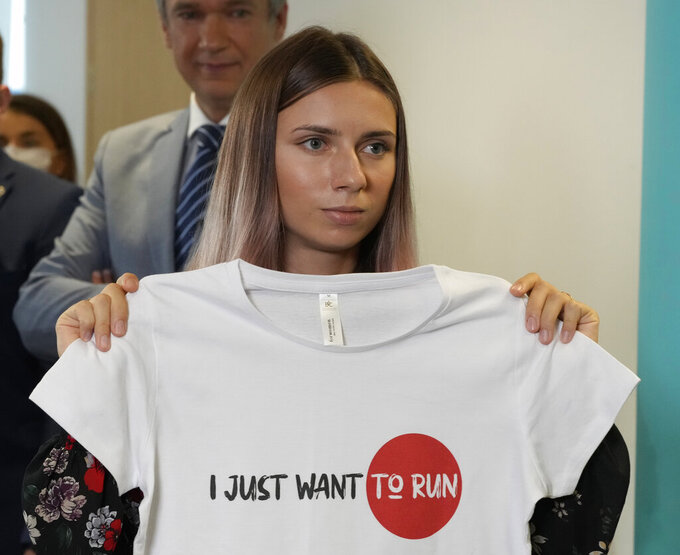 Belarusian Olympic sprinter Krystsina Tsimanouskaya, who arrived in Poland on Wednesday fearing reprisals at home after criticizing her coaches at the Tokyo Games, holds up an Olympic-related T-shirt with the slogan "I Just Want to Run" after her news conference in Warsaw, Poland, on Thursday, Aug. 5, 2021. Tsimanouskaya reached Poland by plane from Tokyo through Vienna, a circuitous route due to security concerns, days after she accused team officials of trying to force her to fly back to Belarus, where an authoritarian government has relentlessly pursued its critics. (AP Photo/Czarek Sokolowski)

TOKYO (AP) — Two Belarus team coaches have been removed from the Olympics, four days after they were involved in trying to send sprinter Krystsina Tsimanouskaya back to their country.

The International Olympic Committee said Friday it has canceled and removed the credentials of Artur Shimak and Yury Maisevich.

“The two coaches were requested to leave the Olympic Village immediately and have done so,” the IOC said.

It was done as an interim measure during a formal investigation “in the interest of the wellbeing of the athletes,” the Olympic body said.

Shimak and Maisevich continued to have contact with Belarusian athletes since Sunday after the IOC linked them to taking Tsimanouskaya in a car to the airport to put her on a plane to Belarus.

Tsimanouskaya had criticized team coaches on social media and is now in Poland with a humanitarian visa.

The IOC said Shimak and Maisevich “will be offered an opportunity to be heard” by its disciplinary commission investigating the case.

The Belarusian Olympic committee said both men will return to Minsk soon and “they reserve the right to appeal against the decision.”

Belarus has been in turmoil for a year since authoritarian president Aleksander Lukashenko claimed a sixth term after a state election widely viewed as rigged in his favor. The former Soviet republic has relentlessly pursued its critics.

Lukashenko also led the Belarusian Olympic committee since the 1990s until this year. His son, Viktor, was elected to replace him.

The IOC banned both Lukashenkos in December from attending the Tokyo Olympics after investigating complaints from athletes they faced reprisals and intimidation in a security crackdown after the election.

Alexander Lukashenko was also unable to attend the 2012 London Olympics because of a European Union visa ban imposed during a previous crackdown that followed a disputed election.

Still, the IOC's slate of sanctions against Belarus was criticized by activists there and international groups representing athletes who urged a full suspension of the national Olympic committee. That would have let Tsimanouskaya and the rest of the 103-member Belarusian team compete as independents under the Olympic flag.

Asked Friday about how Olympic officials had handled Belarus, IOC President Thomas Bach said it was “not in a position to change the political system in a country.”

“What our responsibility and our remit is is to protect the athletes as much and as far as we can,” Bach said, describing the incident in Tokyo as a “deplorable case."

In Belarus, Olympic officials said they were in close contact with the IOC and "shall continue to defend and protect the interests of all Belarusian athletes and coaches from any forms of discrimination, if any.”

However, Belarus was also selected by the European group of national Olympic bodies to host the 2019 European Games. That multi-sport event brought about 4,000 athletes to compete in Minsk.