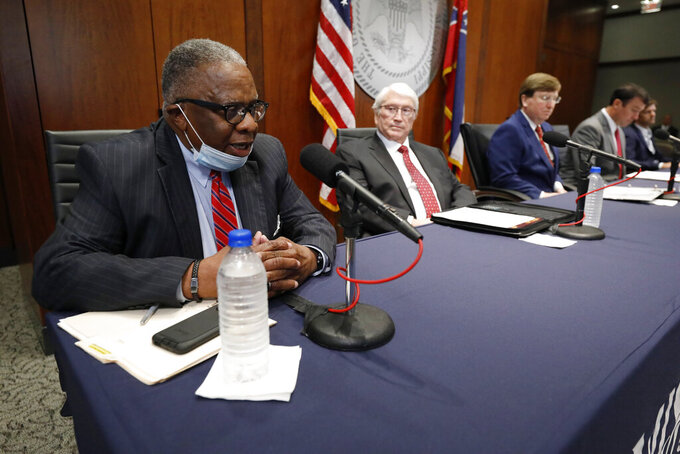 Vicksburg, Miss., Mayor George Flaggs, left, speaks about the search committee's suggestion that Burl Cain, the former warden of the Louisiana State Penitentiary, commonly known as Angola, seated second from left, be selected by Gov. Tate Reeves, second from right, as the new commissioner of the Mississippi Department of Correction, during Reeves' daily coronavirus update for media, Wednesday, May 20, 2020 in Jackson, Miss. (AP Photo/Rogelio V. Solis)

VICKSBURG, Miss. (AP) — Two former Mississippi lawmakers are seeking reelection as mayors, while leaders of some other cities will not be back on the ballot this year.

Billy Hewes said Friday that he is running for a third term as mayor of Gulfport, again as a Republican. He served in the state Senate from 1992 to 2012 and unsuccessfully sought the Republican nomination for lieutenant governor in 2011.

George Flaggs Jr. filed papers Friday to run for a third term as mayor of Vicksburg. Flaggs was a Democrat in the state House from 1988 until he was elected mayor in 2013. He was elected mayor in 2013 and 2017 as a Democrat. He later became an independent, saying he thinks city officials can best serve without party attachments. Flaggs told the Vicksburg Post that he wants the city to recruit more police officers and push forward with economic development projects.

Jackson Mayor Chokwe Antar Lumumba, who is a Democrat, said months ago that he will seek a second term in Mississippi's largest city.

The Democratic mayor of Tupelo, Jason Shelton, is not seeking a third term. Several candidates have entered that race.

The Republican mayor of Ocean Springs, Shea Dobson, said Friday that he will not seek a second term, the Mississippi Press reported. Three candidates have signed up to run in the coastal city.

“I have some great opportunities that I do not want to pass up and want to take advantage of while I am still young,” Dobson said. “I turn 35 this year and have many goals left to accomplish.”

Dr. Steve Demetropoulos has been Pascagoula mayor for about a year, after winning a nonpartisan special election. He recently said he will not seek a full term this year because the coronavirus pandemic has increased demands on his practice as an emergency room physician, WLOX-TV reported.

In Pascagoula's neighboring city of Moss Point, Democratic Mayor Mario King announced Jan. 15 that he is not seeking reelection. Democratic state Rep. Jeremey Anderson announced in November that he is in the Moss Point race. King was indicted last year on federal conspiracy and wire fraud charges. His trial is set to begin in March.