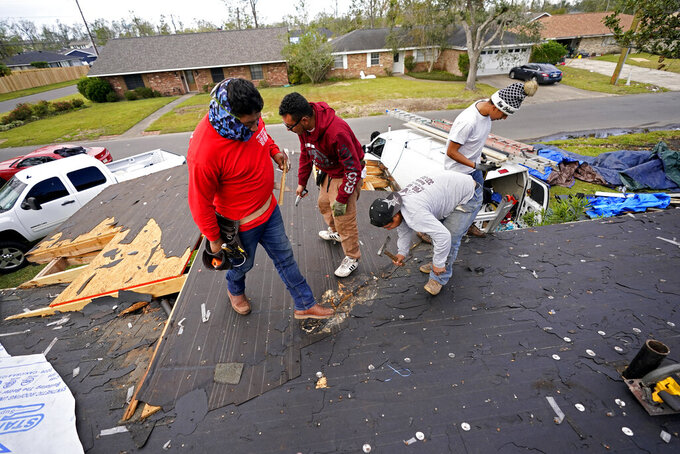 Roofers work on the heavily damaged and gutted home of Christi and Brandy Monticello, in the aftermath of Hurricane Laura and Hurricane Delta, in Lake Charles, La., Friday, Dec. 4, 2020. (AP Photo/Gerald Herbert)

LAKE CHARLES, La. (AP) — As southwest Louisiana recovers from the back-to-back hurricanes that hammered the region this year, signs of progress compete with lingering evidence of mass destruction. The fallen trees that carpeted neighborhoods have mostly been chopped up and hauled away, but the roofs they devoured are still covered in blue tarps. Piles of debris still line the roads.

Christy Monticello is thankful for the progress. She and her wife no longer have to go to the Civic Center just to get basics like drinking water or ice. But during her daily 45-minute commute from the trailer the family is living in to the hospital where she works as a respiratory therapist, she sees how much still needs to be done. Every day, another house demolished. So many tarps on those still standing.

“It’s almost overwhelming by the time you get home," she said. “You do have to cry every once in a while just to let some emotions out.”

In a year dominated by the coronavirus pandemic, a deeply divisive election and a national reckoning on race, some worry that the hurricanes and their destruction have not gotten the kind of attention that normally leads to an outpouring of support.

Aid efforts after Laura and Delta have only garnered about 25% of the volunteers and donations as other storms affecting the region, such as 2005′s Hurricane Rita, said Denise Durel, president and CEO of the United Way of Southwest Louisiana.

Hurricane Laura roared ashore in southwestern Louisiana on Aug. 27 as a Category 4 storm just south of Lake Charles. On Oct. 9, recovering residents watched as Category 2 Delta swept in just a few miles away. What didn’t get scoured by Laura’s winds was swamped by Delta’s rains. Delta also ripped off the tarps that had gone up on roofs after Laura.

According to Louisiana government figures, nearly 47,000 homes were damaged by Hurricane Laura, with about 16,000 of those in need of major repairs. The bulk of those homes are in Calcasieu Parish, home to the state's fifth-largest city, Lake Charles, with 80,000 residents. In the less-populated Cameron Parish on the Gulf of Mexico, many homes were simply erased by Laura.

“The first one was a big blow. The second one just was an insult,” Monticello said. In the early weeks after the first hurricane, she, her spouse, and three sons lived all together in the living room. They realized just how damaged the house was when Delta arrived and water started streaming in.

The Monticellos have since reached into their savings to buy a trailer and a truck to haul it so they have someplace to live while their house is being rebuilt.

There is a scarcity of just about everything: good contractors, storage containers, affordable apartments, staff for the businesses that are open. A Facebook group set up after Hurricane Laura has become a lifeline for struggling residents. A recent posting asked for advice on keeping campers warm in winter or keeping mice out of trailers. Another posting asked the question, "What does everyone need," prompting a stream of answers such as, “Drywalling lessons and classes on how to handle an insurance claim” or “HOPE. Hope that things will get better.”

Wilfred Trahan remembers driving home for the first time after Laura and seeing every telephone pole for miles snapped at the base. Roof after roof smashed. Like many homes, his two-story house looked OK from the outside but told a different story inside. His chimney had smashed through the roof and he estimated he lost about 80% of his shingles, leading to extensive water damage. The house had to be gutted.

Now he commutes back and forth from Lafayette, about 75 miles (121 kilometers) away, where he and his wife are living in a hotel. Sometimes he stays overnight with family or friends whose houses survived. On a recent day, he arrived at his property at 6 a.m. only to find that the contractor who was supposed to meet him there was a no-show. He counts himself lucky because he has a fence — albeit a damaged, lopsided one — surrounding his backyard. That means he can put supplies there and they don't get stolen overnight.

“Everybody’s fighting for the same contractors," he said. “It’s been crazy."

The biggest shortage is housing. Many residents are still living in hotels in Texas or other parts of Louisiana and commuting into town to oversee their rebuilding or entrusting the work to contractors from afar. Residents have bought trailers and parked them in their driveways. Others sleep in tents.

That's what happened to Cristin Trahan and her family. Having weathered Laura in a house south of Lake Charles, she struggled to hold her emotions in check in front of her kids when she saw what had happened to her mobile home.

“It was several, several feet over, upside down, smashed," she said.

Cristin’s son, fiancé and 1-year-old son are now staying in a trailer that volunteers gave them. Trahan said she didn't want to take her family and the family's dogs to a shelter, and looters have gone through their possessions, so the family decided to remain on the property.

They've struggled to keep the rain out of their tent. Trahan, who works at Chick-fil-A, washes her uniform and dries it by the warmth of a propane heater and a fan in her tent. She said she is constantly aware of the things that she used to take for granted before Laura, such as being able to wash dishes in hot water so the grease actually comes off instead of cold water from an outside hose.

Brandy and Christy Monticello struggled with the decision: Stay or go? Finally, even after others had picked up, sold everything and left, they decided to stay put. It's still their home, after all.

The sound of workers nailing in their new roof on a recent Saturday morning was a sign of progress.

“It’s not our normal and we don’t know what normal is, but you know what? We’re doing it. And that’s all we can do,” she said.

This story has been updated to correct the first name from Brandy to Christy in the second paragraph.