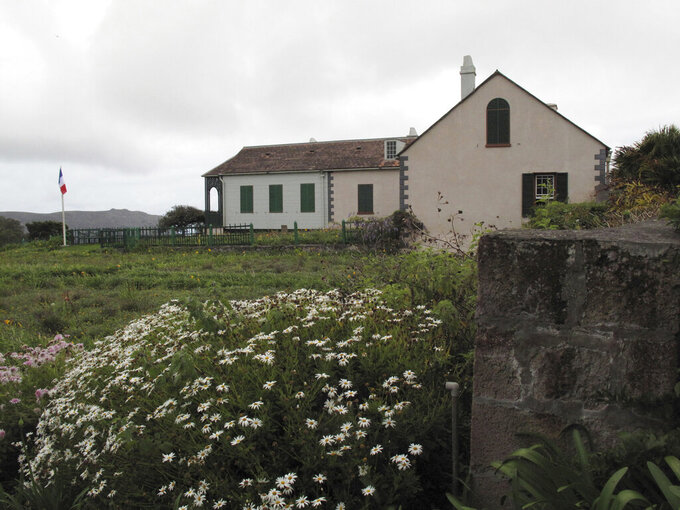 FILE - In this Oct. 14, 2017, file photo, a view of Longwood House on St. Helena in the Atlantic Ocean, where Napoleon Bonaparte lived during his exile until his death in 1821. Commemorations of the May 5, 1821 death of Napoleon are going ahead on St. Helena, the remote South Atlantic island where the deposed French emperor died in exile. But they are not happening with an influx of international visitors that was expected before COVID-19 swept across the world. While the volcanic island has not had any confirmed COVID-19 cases, reaching it got even harder because of travel restrictions during the pandemic. (AP Photo/Christopher Torchia, File)

Getting to the remote South Atlantic island where Napoleon died 200 years ago got even harder during the coronavirus pandemic.

So while commemorations of the May 5, 1821 death of the deposed French emperor on British-ruled St. Helena are going ahead there, they are not happening with an influx of international visitors that was expected before COVID-19 swept across the world.

The volcanic island of about 4,500 people has not had any confirmed COVID-19 cases, but “we are no longer expecting the cruise ship visitors nor regular air visitors″ and the Napoleon commemorations ″will be restricted to local events only,″ said Nicole Shamier, chief economist for St. Helena’s government.

“We are all having our second vaccinations (AstraZeneca) and we are welcoming both yacht and tourist visitors although our flights are only every 5 weeks from London via Accra, so our visitor numbers are significantly lower than normal,″ Shamier said last month in an email to The Associated Press.

St. Helena lies about 1,930 kilometers (1,200 miles) west of the border between Angola and Namibia, the nearest mainland. The Saint Helena Napoleonic Heritage group, which is dedicated to preserving Napoleon’s memory on the island, plans to hold several events in coming days, livestreamed if the island's internet connection holds up.

On Wednesday, a ceremony is being held at Longwood House, where the exiled emperor died. The time of his death — 5:49 p.m. — will be marked by a minute of silence, according to the group. Then a Catholic Mass will be held in the dining room at Longwood on May 6, followed by a tombside ceremony on May 9 to mark the bicentenary of the burial.

First exiled to the Mediterranean island of Elba, Napoleon escaped, met defeat at the battle of Waterloo and was sent in 1815 to St. Helena, where he died after falling ill. His body was later exhumed and entombed at Les Invalides in Paris.

A reported 1,000 ships a year used to anchor at St. Helena, which was uninhabited when the Portuguese discovered it in 1502 and became a critical way station for trading vessels traveling between Asia and Europe. In the 19th century, it also became a base for anti-slavery patrols after Britain moved to abolish slavery.

The island’s trading role diminished after the 1869 opening of the Suez Canal offered a shortcut to intercontinental shipping. The island’s biggest industry was once growing flax for the manufacture of rope, but St. Helena is now heavily dependent on British government support.

Besides Napoleon, the British sent other prisoners to St. Helena, including rebellious Zulu royal Dinuzulu kaCetshwayo, thousands of Boer prisoners from South Africa at the beginning of the 20th century and, in the late 1950s, three leaders from Bahrain, then under British control.

During World War II, a German submarine sank a British vessel at anchor off Jamestown, St. Helena’s capital. A memorial to the 41 people from the RFA Darkdale “who have no grave but the sea” sits on the waterfront.

Longwood House was prone to damp and roaming rats. Napoleon chafed at restrictions imposed by the British. The frustrations of the man who steered politics and commanded armies across Europe were documented by members of his retinue on that island of forbidding volcanic cliffs.