200K in US have died from virus. Now Trump says he 'gets it' 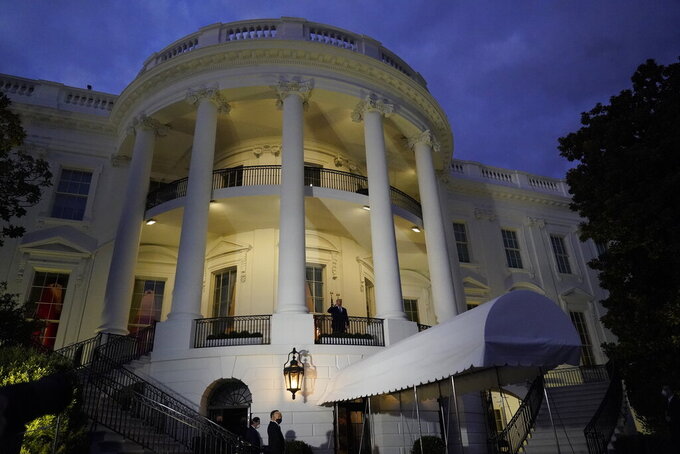 WASHNGTON (AP) — Now that he has contracted COVID-19, President Donald Trump says he does “get it.” That revelation, seven months into the pandemic and after almost 210,000 American deaths, is not the first time he has relied on personal experience to shape his views.

He said he now “understands” the virus. But because of his own experience, as a patient at one of the nation's finest medical facilities with treatment options available to very few, the president also reinforced that he has struggled to relate with everyday Americans, millions of whom have lost their jobs because of the coronavirus.

Instead, as he has in relationships with other countries, he has prioritized his own personal experience over that of experts. He has been reluctant, for instance, to call out Russian President Vladimir Putin over interference in American elections in the face of clear evidence from the U.S. intelligence community that it has occurred.

He has also drawn frequently on his experience with the business world or his own family to set the White House agenda. He cited his business acumen as helping him land a deal for the U.S. Embassy in Jerusalem, and he said he understands the airline industry because of his time running the failed Trump Shuttle.

Despite months of briefings from the nation's leading infectious disease experts, it was the onset of his own symptoms, as he was brought low by a lethal virus, that he said gave him a greater understanding.

That understanding, however, seemed very much in conflict with expert public health guidance about how the virus behaves and the precautions that people infected, particularly those in a higher risk group like the president, need to take.

“It’s been a very interesting journey," Trump said in a video released Sunday night. "I learned a lot about COVID. I learned it by really going to school. This is the real school. And I get it, and I understand it, and it’s a very interesting thing, and I’m going to be letting you know about it.”

But it soon became clear that he did not, in fact, get it.

Trump took a surprise ride in a motorcade to pay tribute to his supporters, potentially exposing the Secret Service agents who rode in the vehicle with him. The next day, when announcing that he would be returning to the White House, he took a tone that suggested he was out of touch with suffering Americans who could not receive the same level of presidential care.

“Don’t be afraid of Covid. Don’t let it dominate your life,” Trump tweeted. “We have developed, under the Trump Administration, some really great drugs & knowledge. I feel better than I did 20 years ago!”

At no point since he tested positive for the virus has Trump acknowledged others afflicted with the deadly disease. His general election foe, Democrat Joe Biden, on Monday urged him to fundamentally change how he manages the pandemic.

“I was glad to see the president speaking and recording videos over the weekend,” Biden said in Miami. “Now that he’s busy tweeting campaign messages, I would ask him to do this: Listen to the scientists, support masks.”

Even when the virus struck longtime friends, like Stanley Chera, a New Jersey developer who died of the disease in April, Trump did not change his approach and continued to talk about the virus as though it would soon be a thing of the past.

“We’ve always said that he has no capacity for empathy. His sense of self-regard is so overwhelming, he views everything that passes through the world through the lens of what it does for him,” said Eddie Glaude, chair of the department of African American Studies at Princeton University.

“Even though more than 200,000 Americans are dead, the nature of the crisis doesn’t come home unless it actually touches him,” Glaude said. “Could he ever represent anyone other than himself?”

Trump has said he could deal with North Korean leader Kim Jong Un because he had established a personal rapport with the authoritarian figure in ways that his predecessors could not.

“I was being really tough and so was he. And then we would go back and forth,” Trump said at a 2018 rally. “And then we fell in love. No really. He wrote me beautiful letters.”

Since Trump has in effect declared his battle with the disease successful — an assessment that available medical evidence suggests is premature — it remains doubtful that Trump would take his personal experience battling COVID-19 and rethink his administration’s policies or attitudes toward the pandemic, especially given the competing imperative of continuing his presidential campaign.

Trump often has had difficulty embracing a central role of the American presidency: consoling people dealing with intense grief, regardless of their political affiliation or support for the White House’s agenda. It’s a quality rarely debated or analyzed during a campaign, yet one that can shape the way people view the success of their president.

But in 2020, it has become a central issue. The president has rarely mentioned the toll of the virus on the nation, instead focusing on an economic recovery or a rise in the stock market.

He has largely eschewed wearing a mask and mocked those who have. And he has ignored his own federal government’s guidelines when holding rallies and large-scale White House events.

Trump may draw lessons from his own experiences but will rarely ever acknowledge a misstep, said former campaign adviser Sam Nunberg.

“He once said, 'It is what it is’ about the impact of COVID. His video (Sunday night) was better than that, it was probably the closest he is going to get to an apology," said Nunberg. “That’s not who he is.”

The White House sees it differently.

“He has experience now fighting the coronavirus as an individual,” said Erin Perrine, a campaign spokeswoman. “Joe Biden doesn’t have that.”