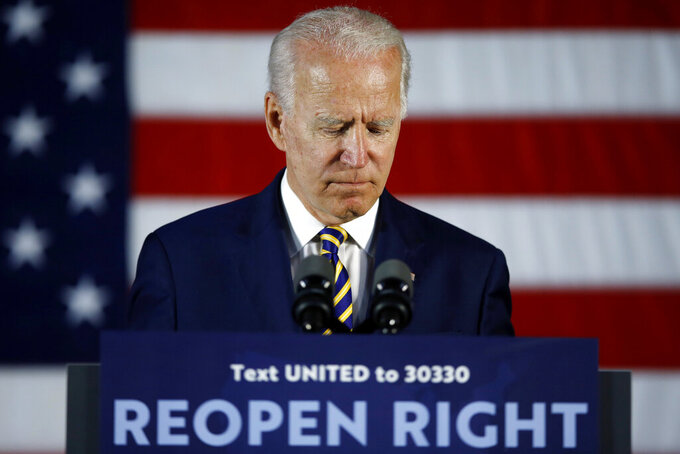 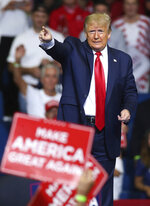 Days to next set of primaries (New York and Kentucky): 1

President Donald Trump's campaign relaunch is off to a rocky start, and his Republican critics are getting louder as coronavirus infections continue to surge.

There were thousands of empty seats at the Oklahoma arena where Trump hosted his comeback rally on Saturday, an embarrassing development at an event designed to showcase the Republican president's strength. Aides were scrambling to explain away the poor optics as they juggled damaging headlines on other fronts.

Former Trump national security adviser John Bolton's much-anticipated book will be formally released this week. Bolton becomes the latest in a long line of former Trump aides to raise dire warnings about the president's job performance. At the same time, the president is trying to distance himself from Attorney General William Barr's firing of the U.S. attorney in Manhattan, who was forced out in the midst of investigating Trump's allies.

As Trump navigates continued chaos, voters in New York and Kentucky head to the polls on Tuesday in another set of primary elections that will test the nation's ability to host fair elections in the age of the coronavirus.

What happened in Tulsa?

The political world was genuinely surprised to see thousands of empty seats at Trump's comeback rally in Oklahoma over the weekend. Critics often question the president's grasp of policy, his discipline and his character, but before Tulsa, few people questioned his ability to pack an arena.

Was the relatively low turnout simply an anomaly caused by fears of protests, the pandemic or social media trolls? Or was it a legitimate sign that the energy behind Trump's reelection is fading?

For a president obsessed with crowd size, this is clearly an embarrassing development that will linger into the week, even if Joe Biden might well have struggled to draw a crowd like Trump did. And perhaps more importantly, the finger-pointing inside Trump's campaign will intensify ahead of a possible staff shakeup.

Primary voters across New York and Kentucky offer another high-profile test Tuesday for the nation's election system amid continued coronavirus concerns. After a series of disturbing recent trends in states like Georgia, Pennsylvania and Nevada, election experts are worried.

Georgia voters waited as long as five hours to cast ballots earlier in the month, a problem that disproportionately affected voters of color. And a surge in mail balloting created days-long delays in reporting final results in Pennsylvania, among other states.

Has Democratic overconfidence become a problem?

As Trump's chaotic presidency continues, Democrats are increasingly under pressure to guard against overconfidence. That's easier said than done, especially as Trump's own advisers privately worry about his reelection prospects and a stream of public polls raise the prospect of a Biden victory.

Biden's numbers may be strong more than four months out, but it's easy to forget that he struggled badly to energize voters in early primary contests. And few progressive activists seem genuinely excited about his candidacy.

Biden's campaign and its allies will have their hands full in the coming weeks and months maintaining a real sense of urgency in its supporters. History suggests that fear of Trump alone is not enough.

How much damage will Bolton do?

While the most damning details have already been reported, Bolton's book, "The Room Where It Happened," is scheduled for formal release on Tuesday. That means Trump is far from past the negative attention related to the book, which he ensured would remain a bestseller by suing unsuccessfully to block its publication.

Bolton, who worked alongside Trump in the White House for nearly a year and a half, has already called the president unfit for office. He tops a remarkable list of people who have worked closely with Trump and raised similar concerns.

Lest anyone think some things might be off limits in 2020, the Trump campaign ramped up its attacks on Biden's age, health and mental capacity last week by launching a website suggesting he's “barely there.” Among a series of the gaffe-prone Biden's career lowlights, the site notes that Biden forgot when he had a brain aneurysm: “Both of his brain aneurysms were in 1988.”

Trump's campaign is well aware that Biden has siphoned away some of his support among older Americans, a trend that could prove extremely detrimental for Trump in several states come November, especially in Florida. Is this the kind of message that might help Trump win back older voters? One thing is clear: The deeply personal attack has become a pillar of Trump's 2020 strategy, and the president's team has the money and the willingness to take it as far as it needs to.

As bad as it looks for Trump's reelection right now, 134 days is a lifetime in presidential politics. His team has only begun to spend its tremendous resources to persuade swing state voters, the candidates have yet to debate and Biden's flaws aren't going away.