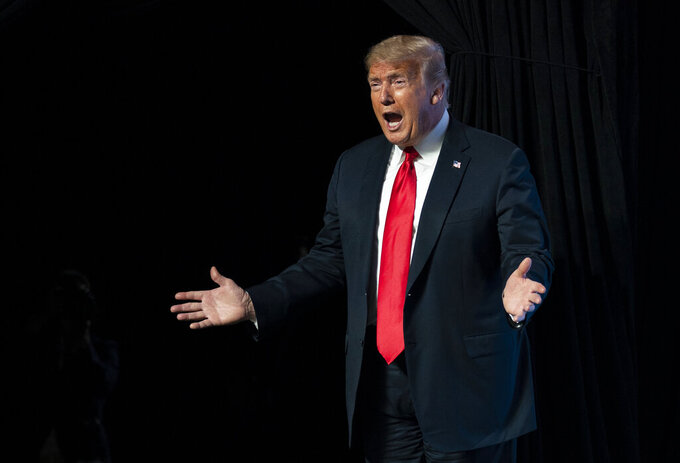 FILE - In this June 23, 2020, file photo, President Donald Trump arrives to speak to a group of young Republicans in Phoenix. The Republican president is hoping that a high-profile appearance at Mount Rushmore this Friday can help boost his standing. (AP Photo/Evan Vucci, File)

Days to next set of primaries (New Jersey and Delaware): 8

President Donald Trump is aggressively working to undercut public confidence in the November general election by stoking baseless concerns about voter fraud as he continues to struggle through one of the lowest points of his presidency.

The familiar yet startling attacks on a pillar of democracy come amid a resurgence of the coronavirus under Trump's watch that forced Vice President Mike Pence to cancel upcoming campaign stops in Florida and Arizona and pushed several Trump-allied Republican governors to scale back reopening efforts.

The Republican president is hoping that a high-profile appearance at Mount Rushmore this Friday can help boost his standing.

Meanwhile, Joe Biden is maintaining a comparatively low profile ahead of what's expected to be a quiet summer for the Democratic presumptive nominee.

Is the president's focus on (nonexistent) voter fraud already de-legitimizing the election?

Trump has the world's most powerful megaphone, and he's increasingly using it to undercut the legitimacy of his own country's election system.

Last week in Arizona, he predicted that the November election would be “the most corrupt election in the history of our country” while spreading false claims about potential voter fraud. To be clear, there is no evidence of widespread voter fraud in the United States with or without mail balloting. In the era of tribal politics and alternative facts, however, Trump's claims have tremendous potential to undercut his supporters' confidence in the election results should he lose.

With no clear reelection message, it’s safe to assume that Trump will continue to attack the U.S. voting system. No one knows how many people will believe him.

Wasn't the warm summer air supposed to kill the coronavirus?

Just two months ago, Trump offered a bold prediction: “Maybe this goes away with heat and light. It seems like that's the case.”

Well, with summer upon us, the daily number of confirmed coronavirus infections in the U.S. late last week surged to an all-time high of 40,000. The Republican governors of two of the nation's most populated states, Texas and Florida, rolled back reopening plans. Pence canceled upcoming campaign events because of coronavirus concerns. And health officials fear that a surge in hospitalizations across the South and West will strain public health systems.

The resurgence of the virus could have enormous practical and political effects, especially as state elections officials scramble to plan safe and effective voting procedures for the fall. A month ago, it looked as if the nation might have been well past the worst of the pandemic by Nov. 3. That's far from certain today.

Always eager to embrace made-for-TV shows of strength, Trump is planning a massive fireworks display at Mount Rushmore on Friday. In so doing, he is pushing past a decade-old ban on pyrotechnics in the South Dakota national park that was instituted to help reduce the risk of forest fires.

Trump cannot afford another major miscue after his unofficial campaign relaunch was marred by lower-than-expected turnout in Oklahoma earlier in the month. He’s betting big that voters will appreciate his Independence Day eve appearance alongside the carved busts of Presidents George Washington, Thomas Jefferson, Theodore Roosevelt and Abraham Lincoln.

Trump is scheduled to return to Washington for July 4 festivities, which include a ceremony from the White House where he is expected to deliver remarks.

How visible does Biden need to be this summer?

Biden's team has repeatedly dismissed calls for him to play a more active role on the campaign trail in the midst of the pandemic, and a growing body of polling evidence suggests that the low profile paid off. But how long can it continue?

The former vice president has gone more than two months without holding a news conference, he's not expected to host a traditional rally anytime soon and he's planning to accept his party's nomination at a largely virtual national convention in August.

There are obvious risks to a run-out-the-clock strategy. Voters, and their proxies in the media, expect to have access to the presumptive nominee. And the less he's out there, the rustier he may be during higher-profile moments when everyone's paying attention this fall, such as the debates. Still, we’re not sensing any urgency from Biden's camp, particularly during summer months when voters are traditionally disengaged anyway.

While there will be plenty of inconsequential bickering between the parties this summer, it's hard to overstate the importance of Trump's ongoing fight against the integrity of the U.S. election system. His baseless charges of voter fraud and corruption are getting louder as his poll numbers sink.

“Never,” said presidential historian Douglas Brinkley when asked whether any past U.S. president had ever used such language. “What you’re seeing is someone who’s an autocrat or a dictator in action.”

Despite such criticism from historians, Trump's campaign to undercut confidence in U.S. elections could live long past his presidency.