$250M+ at stake for teams fighting relegation in EPL finale 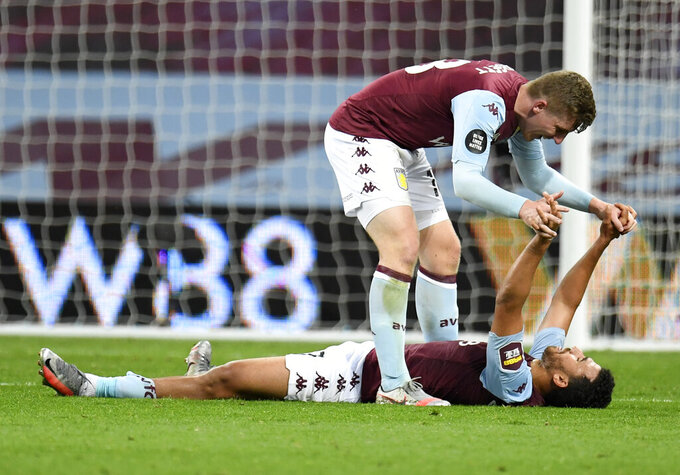 The anguish of Leeds and Nottingham Forest provides a reminder of just what is at stake on the final day of the English Premier League for the teams fighting relegation.

Leeds has only just secured a ticket back after 16 years in exile.

Forest's attempt to gain promotion will extend into a 22nd season after collapsing to miss out on the second-tier Championship playoffs.

Status and history offer little protection when a team is trying to stay in the Premier League or regain a place in the world's richest league.

Aston Villa, a former English champion like Forest and Leeds, is clinging to its Premier League status heading into Sunday's final game at West Ham.

“The risk of relegation is probably a 200 million pound ($255 million) catastrophe for any club that mathematically could still go down,” Villa chief executive Christian Purslow said recently on Talk Sport radio.

Norwich has already been relegated after one season back in the top-flight. Two of Villa, Bournemouth or Watford on Sunday will join Norwich in dropping down.

Relegation will be particularly costly for Villa after spending 145 million pounds (now about $185 million) on players ahead of the season to ensure it did not make an instant return to the second division.

Having been seven points clear of danger at one point this month, Villa is only out of the bottom three due to a superior goal difference of plus-1 over Watford, but it did secure a valuable shock victory over Arsenal on Tuesday.

Arsenal is Watford's opponent on Sunday.

Bournemouth heads to Everton sitting three points behind Villa and Watford in next-to-last place, and with the same goal difference as Watford (minus-27).

“We have to be mindful of what’s happening at other games," Villa manager Dean Smith said. "And we’ll have some ‘What if’ scenarios in the final 15 minutes.”

With no fans in the stadium due to the pandemic, the crowd noise won't offer an indication of how the games are going for Watford's relegation rivals.

“It is just natural that there are people around who will have to keep us up to date on the results,” Mullins said. “It won’t be something I spend a lot of energy on and worrying about, it is about trying to get us right, and if we get it right then we will have a look at the rest after.

“The boys will be tuned in to what is happening. At times if we need to get messages onto the pitch we will."

Bournemouth must beat Everton and rely on Watford and Villa losing to secure a sixth season in the Premier League.

“Thinking too much, or getting too emotional, can be very counterproductive," Bournemouth manager Eddie Howe said. "So we need the players just to — it sounds funny, but —- enjoy the game, play the game as they have always done. But play to a very high level, that’s what we’ll be trying to do.”

Even finishing last in the division, and being relegated, earns a team around 100 million pounds in prize money and television revenue.

The league is yet to disclose this season's distribution of cash to clubs, with rebates due to broadcasters over the disruption to the season caused by the coronavirus pandemic.

Missing out on television cash next season could prove even costlier for relegated teams. In the Championship, they will be more reliant on matchday revenue which is currently nonexistent due to stadiums being closed to supporters. Even if arenas reopen as planned in October, capacities could be capped at around 25%.

To soften the blow of relegation, a team will still receive up to 42 million pounds from the Premier League in its first season back in the second division and a smaller amount the next two years.

The parachute payments have been criticized by the English Football League, which operates the three divisions below the Premier League, as they create an imbalance over the income for teams.

“We need a complete reset and we need to look at the redistribution of revenues," EFL chairman Rick Parry said recently. “Parachute payments are an evil that needs to be eradicated.”