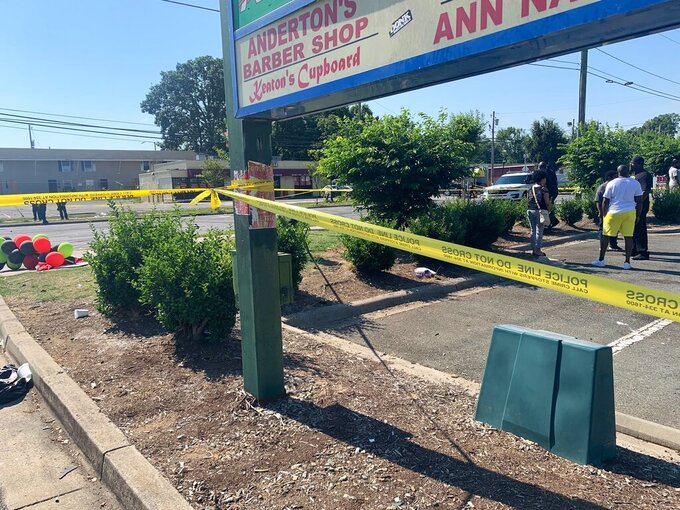 Police tape is seen near the scene of a shooting early Monday, June 22, 2020 in Charlotte, North Carolina, that resulted in two deaths and several more people wounded or injured. Police say a shooting in North Carolina's largest city has left two people dead and multiple others wounded, while several others were hit by vehicles at the scene. (AP Photo/Sarah Blake Morgan)

CHARLOTTE, N.C. (AP) — Three people were killed and six others were wounded early Monday when multiple people fired into a crowd at an impromptu celebration in North Carolina, police said. Five others were hit by vehicles.

The shooting happened at an impromptu block party in Charlotte that was a continuation of Juneteenth celebrations, Charlotte-Mecklenburg Police Deputy Chief Gerald Smith said at a media briefing Monday.

About 400 people gathered on the north side of the city when someone in the crowd was struck during a hit-and-run accident, Smith said. Police responding to the scene heard shots being fired. Police believe more than one person fired weapons because videos recorded sounds from guns of different calibers. Authorities recovered around 100 casings from the scene.

Maliyah Cook, a witness and relative of one of the victims, said the mood of the crowd leading up to the shooting had been calm. Suddenly, she heard gunshots.

“I really feel like it was a good party. I don’t know what happened,” Cook told The Associated Press. “It came out the blue.”

As Cook was running, she said she looked down to see her cousin, 29-year-old Kelly Miller, fatally wounded in the middle of the street. Police have said Miller was pronounced dead at the scene while 28-year-old Christopher Antonio Gleaton was pronounced dead after being transported to the hospital.

Matthew Torres, a Charlotte radio personality who goes by the name Chewy, said that with fewer police and organized activities than previous nights, the atmosphere was tense preceding the fatal shootings. Police say gatherings Friday and Saturday in the area ended without injuries and that the crowds dispersed in a mostly peaceful fashion.

But on Sunday, Torres said some in the crowd seemed angry and that he “had a hunch something was going to go on.”

Late Sunday night, cars were doing tricks in the street including one that performed a donut and blew a tire, he said. Soon after, an ambulance arrived and then gunshots rang out. He said it sounded like multiple people in the crowd were firing at once.

Smith said no motive was clear for the shooting.

Near the scene hours later, Myra Stewart said she was saddened by the shooting.

Betty Oates, another Charlotte resident, noted the deaths heighten the sense of crisis during the coronavirus pandemic and a nationwide movement by protesters to highlight racial injustice in the wake of deaths of Black men in police custody.

On Monday afternoon, a group gathered to lay flowers near the scene of the shooting after police cleared it.

“It’s also a reality check that we have to do more than create catchy hashtags and cool signs. We need to get out there and stand up for our people,” Katrina Cherry said.

Smith said the situation grew so chaotic after the arrival of authorities early Monday that a rescue team had to be sent into the crowd to pull people "off the backs of our firefighters” who were treating people hurt at the scene.

Smith also acknowledged that some officers had weapons drawn as they sought to gain control of the scene.

“They were doing the best that they can to make sense out of something that is chaotic, a mass casualty scene," he said.

Smith said that no witnesses have come forward to describe how or why the shooting started and urged the public to help with the investigation.

No one was in custody by midafternoon.

Of the other seven who were shot, three had life-threatening injuries, Smith said.

The five people hit by vehicles are believed to have suffered injuries that were not life-threatening, police said in a news release. Police say four of them appear to have been struck by vehicles fleeing the scene.

Juneteenth, for which celebrations started Friday, commemorates when the last enslaved African Americans learned they were free 155 years ago.