3 Springboks positive for virus as Lions tour set to begin 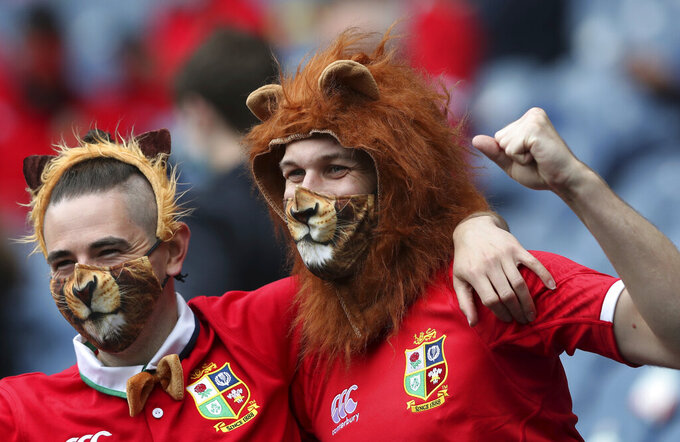 CAPE TOWN, South Africa (AP) — Three members of the Springboks squad tested positive for the coronavirus, forcing the world champions to put all their players in isolation at the team hotel in Johannesburg, national body SA Rugby said on Sunday.

The news came a day before the British and Irish Lions are due to arrive in South Africa for a six-week, eight-game tour. As feared, the Lions tour is coinciding with a winter surge in virus cases in South Africa, which is now in the midst of a third wave and recording nearly 20,000 new infections daily.

The three South Africa players, prop Vincent Koch, scrumhalf Herschel Jantjies and wing Sbu Nkosi, returned positive tests on Saturday when the squad assembled in Johannesburg. Some members of the squad had been in the central city of Bloemfontein for a training camp, while others like Koch recently traveled back to South Africa from overseas clubs.

The entire Springboks squad of nearly 50 players is now in isolation at the hotel and specialist medical advice is being sought, SA Rugby said.

South Africa director of rugby Rassie Erasmus identified the players at an online news conference later Sunday. He said the Springboks were now waiting for advice from a medical advisory committee put together for the South Africa-Lions series and which is made up of both South African and Lions rugby officials and medical experts.

“We are just here in our rooms wanting to make sure that we follow protocol and waiting for the committee to tell us exactly what they want us to do next,” Erasmus said in the video conference call.

The Springboks are due to play Georgia on Friday in the first of two warmup games for them ahead of the three-test series against the Lions. It's unclear if that game against Georgia in Pretoria can go ahead in just five days. It was set to be South Africa's return to international rugby and first test since winning the Rugby World Cup final in Japan in November 2019.

South Africa's schedule was wiped out by the pandemic last year.

South Africa and the British and Irish Lions decided to go ahead with the tour, which comes around once every 12 years for South Africa, despite fears over the pandemic. Initially, the tour was expected to be postponed or moved to another country. To mitigate the risks, the Lions changed their schedule and will be based in only two cities: Johannesburg and Cape Town. They will spend most of their time in Johannesburg, where the last two of the three tests will be played in late July and early August.

However, Johannesburg and the surrounding Gauteng province is the center of the new wave of infections and is being hit hard, with Gauteng recording more than 11,000 of the 17,958 new cases in South Africa on Saturday.