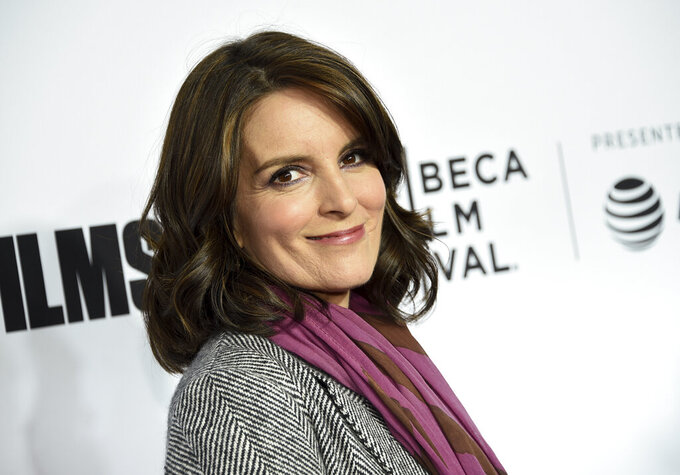 FILE - In this April 18, 2018 file photo, Tina Fey attends the Tribeca Film Festival world premiere of "Love, Gilda" in New York. The cast of "30 Rock," including Fey, Alec Baldwin and Tracy Morgan, will reunite to promote NBCUniversal shows for the 2020-21 season. The hour-long event will air July 16 on the NBC network and also be shown on NBCUniversal cable channels including Bravo and USA Network. (Photo by Evan Agostini/Invision/AP, File)

LOS ANGELES (AP) — Tina Fey, Alec Baldwin, Tracy Morgan and other “30 Rock” stars are reuniting for a corporate cause: to promote the shows and stars that will be part of the new season for NBC and its NBCUniversal cable siblings.

Described as a “one-time, commercial-free event” — other than the extended ad it represents for NBCUniversal — the reunion will air July 16 on NBC and be shown on cable channels including USA Network, Bravo and Oxygen.

It’s a special born of the coronavirus pandemic, which kept NBCUniversal and other media companies from the mid-May tradition of presenting their 2020-21 schedules to crowds of ad buyers in New York City.

The cast of the Emmy-winning, 2006-13 sitcom will be in character, including Jack McBrayer’s enthusiastic network page, the company said Tuesday.

“We’re all happy to have this excuse to (remotely) work together again for NBC,” series executive producers Fey and Robert Carlock said in a statement. “To quote Kenneth the page, there are only two things we love in this world, television and everyone.”

The special will feature new and returning shows from NBCUniversal's platforms and include guests from entertainment, sports and news, the company said, with further details to be announced.

Also Tuesday, NBC played catch-up by releasing its schedule for the fall TV season, which remains shadowed by COVID-19. Given that the film and TV production that was abruptly halted in March is just getting underway, networks have been cautious in committing to specific debut dates.

The mid-season will bring freshman series including “Mr. Mayor,” a Fey-Carlock sitcom starring Ted Danson and Holly Hunter, and “Young Rock,” inspired by Dwayne Johnson’s life and produced by and starring the pro wrestler-turned-actor.