3rd day of violence in Albania over police curfew killing 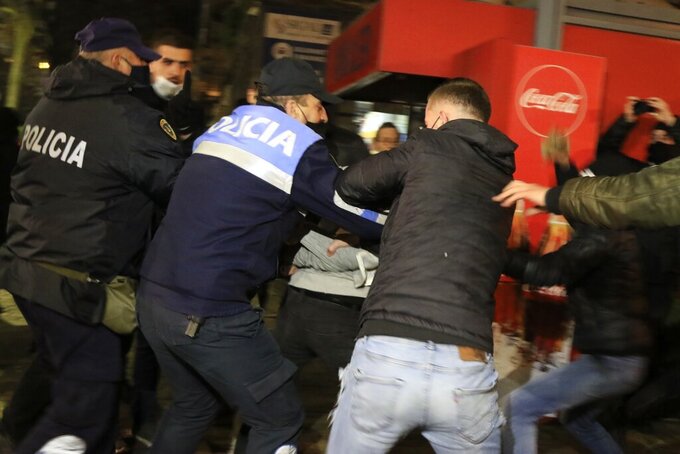 Albanian police detain a protester as others try to release him during clashes in Tirana, Friday, Dec. 11, 2020. Albanian demonstrators clashed in the third day on Friday protesting for the death of a 25-year-old man shot dead by a police officer. (AP Photo/Hektor Pustina)

Defying a ban on public gatherings due to the pandemic, hundreds of people gathered in front of the main government building in Tirana and threw stones, flares and firecrackers at police guarding the site. Officers responded with tear gas and water cannon.

The protests, which have triggered political tension between the Socialist government and main opposition party, follow the death of Klodian Rasha in Tirana during curfew hours early Tuesday. Police say he ignored officers’ calls to stop, and ran away.

Earlier Friday a Tirana court decided that police officer Nevaldo Hajdaraj would stay under arrest while he is investigated for “homicide in excess of necessary self-defense.”

Prime Minister Edi Rama has apologized for what he called the “inexplicable and completely unreasonable" shooting, and his interior minister resigned Thursday.

But that failed to dampen the protests, which spread Friday to at least another three cities.

“The time of change has come and we cannot continue like this any more,” said party leader Lulzim Basha. “Together we shall get rid of Rama.”

The prime minister hit back on Friday, accusing the Democratic Party and opposition-rooted President Ilir Meta of inciting the violent protests.

“The opposition and the president are not only the inciters but also the orchestrators of the violence which is demeaning Klodian’s memory, allegedly in the name of justice but in fact for (their) political purposes,” Rama posted in Twitter.

Albania is due to hold parliamentary elections in April 2021.

During the first two days of violence police arrested 62 people, and a total 116 have been charged with holding an illegal protest during the pandemic, as well as with arson and public order breaches.

Authorities say 21 policemen and four protesters have been injured.

Police said they should not be blamed for the shooting.

“No one should compare the police with an individual who committed a legally punishable act,” a police statement said Friday.

“Those in power have the responsibility to provide a full and transparent investigation into the incident,” she said. “Those seeking to be in power should demonstrate their ability to lead in a responsible manner, including by rejecting violence.”