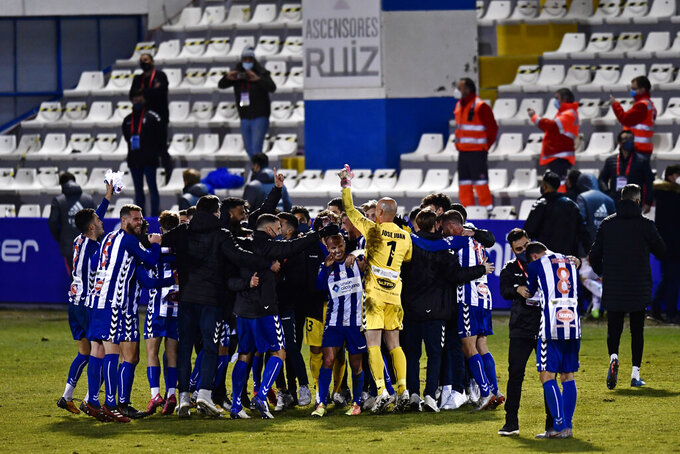 Alcoyano players celebrate after knocking out Real Madrid during a Spanish Copa del Rey round of 32 soccer match between Alcoyano and Real Madrid at the El Collao stadium in Alcoy, Spain, Wednesday Jan. 20, 2021. (AP Photo/Jose Breton)

MADRID (AP) — Real Madrid couldn't avoid another Copa del Rey upset, not even while playing with an extra man against a third-division club.

Small Spanish club Alcoyano came from behind to eliminate Madrid 2-1 in the round of 32 on Wednesday. The hosts scored in the 80th minute to force extra time and again in the 115th to shock the Spanish powerhouse and make it to the last 16. That was despite having Ramón López sent off in the 109th for a second booking.

“We still believed we could win the match even after the red card,” Alcoyano coach Vicente Parras said. “This feat will still be remembered in 15 or 20 years.”

The result will add more pressure coach Zinedine Zidane and Madrid, which was coming off a loss to Athletic Bilbao in the Spanish Super Cup. It was also held to a draw in its last Spanish league game, against relegation-threatened Osasuna.

“When you play against a third-division club you have to win, but we couldn't do it,” Zidane said. “It happens. I'll take the responsibility. We are going to keep working hard.”

Madrid was seeking its first Copa title since 2014, which was the last time it reached the final. It was eliminated by Real Sociedad in the quarterfinals last season. It hadn’t failed to get past the round of 32 since 2015-16, when it was disqualified for using an ineligible player.

Crosstown rival Atlético Madrid had already been eliminated by a third-division club in the second round this season, losing to Cornellà, which will host Barcelona on Thursday.

Based in eastern Spanish city of Alcoy, the small club of Alcoyano made it to the Copa quarterfinals in 1946, when it lost to eventual champion Real Madrid. It has played four seasons in the first division, but not since 1950-51.

Juanan Casanova scored the winner from close range for Alcoyano after a quick counterattack.

Playing without some regular starters, Madrid controlled possession from the start but couldn’t open the scoring until Éder Militão headed in a cross by Marcelo in the final minute of the first half.

Madrid continued to struggle to create scoring opportunities and the hosts eventually found the equalizer with a close-range shot by José Solbes after a corner kick.

Alcoyano threatened again before the end of regulation and in extra time, before López was sent off with a second yellow card for a hard tackle on Casemiro.

The winner by Casanova came after a missed chance by Madrid off a corner kick.

Alcoyano goalkeeper José Juan Figueras, 41, had to make a couple of key saves to keep Madrid from recovering.

The game was played at the 5,000-capacity El Collao Stadium, which was without fans because of the coronavirus pandemic.

“I can't stop thinking about the fans who couldn't be with us tonight, but I'm sure that they are extremely happy with what the team has achieved,” Parras said.

Earlier, Real Sociedad eliminated third-division club Córdoba 2-0 with a pair of second-half goals by William José, the Brazilian forward who was expected to seal a move to English club Wolverhampton Wanderers.

Last season's Copa final between Sociedad and Basque Country rival Athletic Bilbao has yet to be played after being postponed indefinitely because of the coronavirus pandemic.

In the Spanish league, Villarreal missed a late penalty but stayed in fourth place after drawing 2-2 with seventh-place Granada at home.

The visitors took the lead Roberto Soldado in the 21st before Villarreal rallied with goals by Rubén Peña in the 29th and Moi Gómez in the 65th. Kenedy equalized for Granada in the 75th and Villarreal striker Paco Alcácer missed a chance to score the winner by missing a penalty in stoppage time.

Villarreal had won four consecutive games in all competitions.

Real Betis defeated Celta Vigo 2-1 with a pair of goals by Sergio Canales, winning its fourth in a row. Celta took the lead through Santi Mina in the 15th but Canales helped the hosts rally with goals in the 25th and 44th minutes.

It was the fourth loss in a row for Celta in all competitions. It dropped to 11th place in the league standings, while Betis moved to eighth.

Getafe defeated last-place Huesca 1-0 with a 69th-minute winner by Mauro Arambarri. It was the second consecutive win for Getafe, which sits 10th in the 20-team standings.