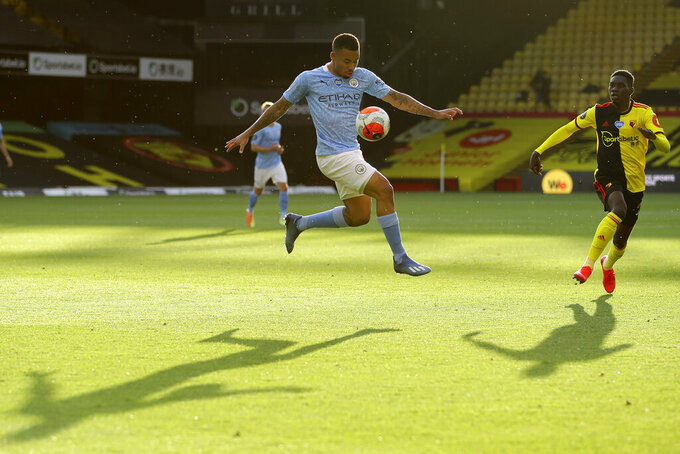 “You get into a state of trying to minimize as much damage as you can,” he said, “and it’s a dangerous way to do things.”

Taking points off City was always going to be a tough task but collapsing to a 4-0 loss to the Premier League runners-up also wiped out Watford’s goal-difference advantage over relegation rivals on Tuesday.

A 1-0 win for Aston Villa over Arsenal hours later dropped Watford into the bottom three, because of its inferior goal difference to Villa.

“The confidence is so crazy, crazy low,” Foster said.

It wasn't even lifted by Watford's last desperate roll of the dice — firing its third manager of the season. Hayden Mullins was promoted for a second temporary stint in charge after the ousting of Nigel Pearson for the final matches against City and Arsenal on Sunday.

“You can’t ever blame it on anything but your own performances," Foster said. “You just get used to it. In football nowadays, nothing seems to shock and you roll with the punches.”

The only record Watford is setting is for the number of managers fired in a season.

City winger Raheem Sterling left Vicarage Road with a welcome record of his own. A first-half double — a half-volley and a follow-up after having a penalty saved — took his season's goal tally to a personal high of 19.

Sterling set up the third when his close-range shot was saved by Foster — Watford's star performer — and Phil Foden tapped into an empty net in the 63rd minute.

When it comes to assists, Kevin De Bruyne leads the way in England. The Belgium playmaker is now one away from a league record-equaling 20 assists after providing a cross for Aymeric Laporte's downward header in the 66th minute.

Trying to secure a fifth straight season in the top tier, the only thing in Watford's favor was Gabriel Jesus having a fifth goal ruled out for offside in stoppage time.

Even if fans were allowed into the stadium — they remain locked out due to the pandemic — there would have been nothing for the Watford players to celebrate with them after this final home match of the season.

Watford has now been outscored 18-0 in its last three meetings with City in all competitions with three different managers in charge.

Javi Gracia was still at the helm when City crushed Watford 6-0 in the final game of last season in the FA Cup final. The Spaniard was fired in September before he got the chance to take Watford to City later that month where Quique Sánchez Flores oversaw an 8-0 humiliation.

Flores didn't even reach the midpoint of the season before he was dismissed in December and replaced by Pearson, who was denied the chance of replicating the shock over Liverpool in February that ended the eventual champion's unbeaten start.

“You can’t ever blame it on anything but your own performances," Foster said. “We have to look at ourselves.”

For a City side that has already surrendered the Premier League trophy to Liverpool, one comfort will be trimming the deficit to 15 points from 25 when the league was paused in March for 100 days to contain the spread of COVID-19.

The Champions League doesn't resume until August when City will be protecting a 2-1 lead over Real Madrid in the last-16.

“It’s really good if all the attacking players are attacking and assisting running up to the game,” Foden said, looking ahead to City protecting a 2-1 lead over Real Madrid in the last-16. “It seems like everyone in front of the goal is going to score in our team.”