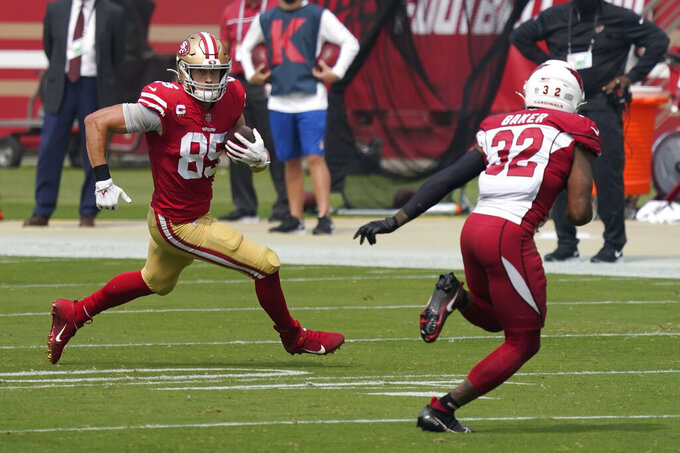 SANTA CLARA, Calif. (AP) — The San Francisco 49ers will be without All-Pro tight end George Kittle this week because of a sprained left knee.

Coach Kyle Shanahan said Friday that Kittle won’t make the trip to face the New York Jets on Sunday after hurting his knee during a season-opening loss to Arizona.

Kittle played the second half of that game after being hit by Cardinals safety Budda Baker late in the second quarter while trying to catch an errant pass from Jimmy Garoppolo. But he was diagnosed with a sprained knee Monday and didn’t practice all week before being ruled out.

The Niners would have waited until Sunday to make that determination if they were at home but once they decided not to bring him on the trip, they ruled him out. Kittle will join them next week in West Virginia, where the team will spend the week before concluding an East Coast trip with a game against the Giants on Sept. 27.

“If he’s not going to play, it’s much better for him to leave him here for a couple of days and let him get his rehab and everything,” Shanahan said. “We had to make that decision a little bit earlier today and that’ll help him and benefit him and he’ll meet us in West Virginia. Hopefully these two days of staying here will help him and hopefully he’ll be ready to go next week.”

The Niners (0-1) head into the game against the Jets without two of their most important players. Cornerback Richard Sherman was placed on injured reserve earlier in the week with a strained calf. He will be replaced by Ahkello Witherspoon, who cleared the concussion protocol.

Cornerback Jason Verrett will miss his second straight game with a hamstring injury and edge rusher Dee Ford is questionable with neck spasms. The Niners will get rookie receiver Brandon Aiyuk (hamstring) and center Ben Garland (ankle) back after they both missed the season opener.

San Francisco also could have receiver Mohamed Sanu in the lineup after he officially signed his one-year contract Friday after completing the COVID-19 protocol. Shanahan said Sanu took part in Zoom meetings all week and will play if the team dresses five receivers.

Sanu played for Shanahan in 2016 in Atlanta and has experience in this offense.

But it will take a lot to replace Kittle, who is one of the most important pieces to San Francisco’s offense as both a dominating run blocker and the team’s biggest threat in the passing game.

His 216 catches for 2,945 yards are the most ever for a tight end in his first three NFL seasons.

“It’s just a good reminder that nothing comes easy in this league,” fullback Kyle Juszczyk said. “What we were able to do last year, it wasn’t easy. We had to grind every week. ... When guys are out, people step up. We did it a lot last year. It’s something we have experience with so we’re just going to look to the next guy and expect them to take care of business.”