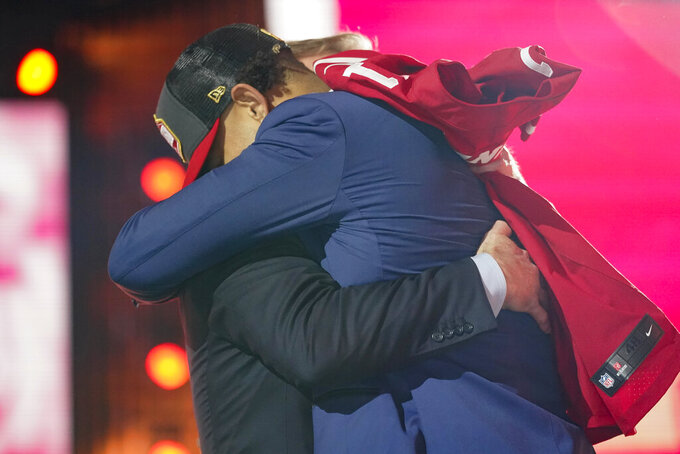 North Dakota State quarterback Trey Lance, right, embraces NFL Commissioner Roger Goodell after being chosen by the San Francisco 49ers with the third pick in the first round of the NFL football draft Thursday April 29, 2021, in Cleveland. (AP Photo/Tony Dejak) 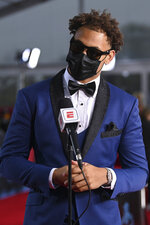 While the rest of the football world spent the month between San Francisco's trade for the No. 3 pick and the start of the draft speculating on which quarterback the 49ers would take, coach Kyle Shanahan watched it all with amusement.

He said he had been drawn to North Dakota State's Trey Lance since starting the draft process in January and the Niners made that decision official when they drafted him Thursday night despite speculation in recent weeks that Alabama's Mac Jones would be the choice.

“If the whole NFL is assuming you’re doing one thing and you’re not doing that, we’re not going to work hard to correct that,” Shanahan said. “So let that be. Whatever way that went, it was going to go. It was crazy to watch where it all went, but no one has known anything but us. It’s been fun to watch. I haven’t been in many situations in my career like that.”

General manager John Lynch said they were pretty sure of the decision a few weeks ago and finalized it Monday. They told ownership of the call on Wednesday and went with the pick after making a quick call to Green Bay after reports that MVP Aaron Rodgers could be available in a trade.

“We inquired and it was a quick end to the conversation,” Lynch said. “It wasn’t happening. We’ve been convicted and excited for a long, long time. So we went right back to where we’ve been."

Now the question will be whether the choice was the correct one after the 49ers traded the 12th pick, two future first-round picks and a 2022 third-rounder to Miami for the right to take Lance as the eventual successor to the oft-injured Jimmy Garoppolo.

Lance started only 17 games at FCS-level North Dakota State, where he displayed a strong arm, mobility and mastery of a pro-style offense against lesser competition. Lance played only one game in 2020 because the FCS moved its season to the spring because of the coronavirus pandemic.

But his production in 2019 was off the charts as he threw for 2,786 yards, 28 TDs and no interceptions and ran for 1,159 yards. Lance threw his only collegiate interception last fall against Central Arkansas in a game North Dakota State played in part to give him more exposure to NFL teams.

Lance then held two pro days this spring and it led to him being picked ahead of bigger-school QBs like Jones and Ohio State's Justin Fields.

While Lance played under center in an offense that featured plenty of play-action that should translate to Shanahan’s offense with the 49ers, he still needs work on some of his mechanics and accuracy.

“I was super blessed to have a coaching staff that trusted me and believed in me to make those decisions,” Lance said. “I think that was a huge advantage for me. I’m excited to get there and learn as much as I possibly can.”

The Niners could ease Lance’s progression to the NFL by keeping Garoppolo as starter in 2021 in a fashion similar to what Kansas City did with Patrick Mahomes and Alex Smith in 2017.

Garoppolo helped San Francisco make the Super Bowl in the 2019 season when he threw for 3,978 yards and 27 TDs. But his struggles in the fourth quarter of that title game contributed to a loss to Kansas City and his injuries have derailed two of the past three seasons.

Garoppolo missed 13 games with a knee injury in 2018 when San Francisco went 4-12 and 10 games with ankle injuries last season when the Niners finished 6-10.

This marks just the fourth time in the common draft era that San Francisco took a quarterback in the first round, with Steve Spurrier going third in 1967, Jim Druckenmiller 26th in 1997 and Alex Smith first in 2005.

The 49ers also have pick 43 in the second round and 102 in the third round Friday, along with five more selections Saturday.