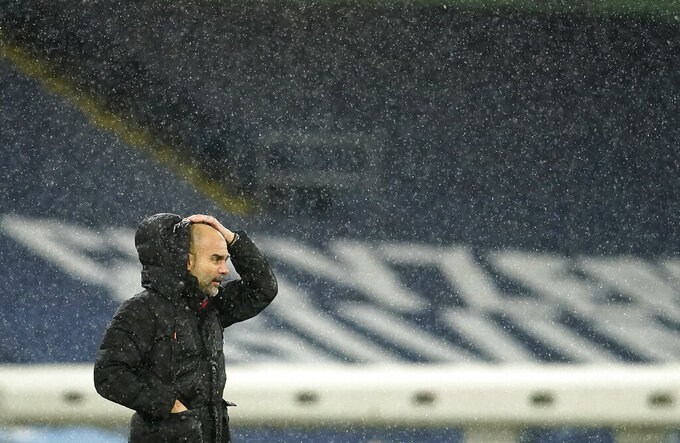 LONDON (AP) — Five Manchester City players are continuing to isolate and won't be available for the game against Chelsea after contracting the coronavirus, manager Pep Guardiola said Friday.

Ahead of Sunday's trip to Stamford Bridge, City has returned to training after the virus outbreak led to the postponement of Monday’s Premier League match against Everton.

The club has only identified forward Gabriel Jesus and defender Kyle Walker as having contracted COVID-19.

Chelsea manager Frank Lampard said Friday that there have been a “couple” of positive cases among the club’s staff but players weren’t infected.

The Premier League has said it has no plans to suspend the competition despite rising infections nationally caused by a more transmissible variant of COVID-19.

Tottenham manager Jose Mourinho is unhappy with the league, criticizing the late decision to postpone the match against Fulham around three hours before Wednesday’s 6 p.m. kickoff after a coronavirus outbreak at its London rival.

“I felt (it was) unprofessional, but that is the way it was,” Mourinho said Friday. “We were preparing ourselves for that match and of course we didn’t play and that is disruptive of what is a week of work.