6 incumbents, including Wilson, win US House races in SC 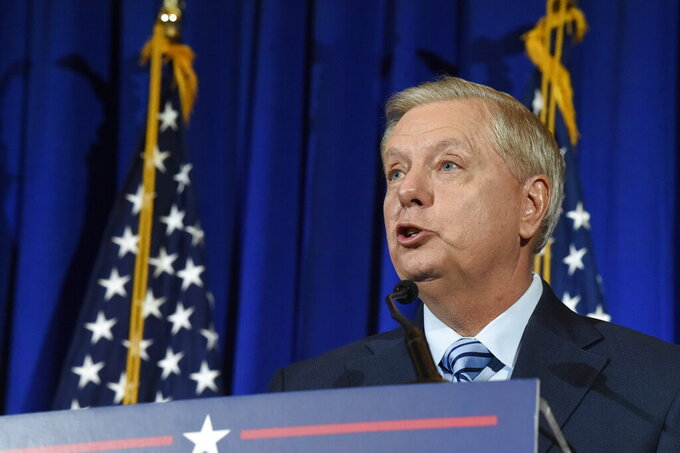 U.S. Rep. Joe Wilson survived one of his toughest reelection fights in winning a 10th full term over Adair For Boroughs, a Democratic newcomer who outraised him.

In all, Republicans flipped at least two state Senate seat and a state House seat and felt as more results came in that they could flip even more.

Each of South Carolina’s seven U.S. House districts had a Republican taking on a Democrat. And four of the seven challengers to incumbents were women. South Carolina has elected only one woman to Congress for a full two-year term.

South Carolina voters have taken advantage of no-excuse absentee voting approved by the Legislature because of the COVID-19 pandemic. As absentee voting ended Monday, more than 1.3 million votes had already been cast, either in person or by mail, according to the state Election Commission. That’s nearly 37% of the state’s registered voters.

In the last presidential election in 2016, 2.1 million ballots were cast in the state.

The most expensive and most watched U.S. House race Tuesday involved Democrat U.S. Rep. Joe Cunningham, trying to win a second term after winning the seat anchored by Charleston and Hilton Head Island two years ago. His Republican opponent is state Rep. Nancy Mace. It remained too early to call early Wednesday morning.

The district is one of the most conservative in South Carolina, extending from the suburbs of Columbia through staunchly Republican Lexington County and into Aiken.

Boroughs tapped into national frustration with politics and touted herself as a young, energetic candidate who wanted to shake up the status quo. She raised more than $2 million, while Wilson raised about $1.5 million.

But Wilson’s name recognition and a district drawn conservatively to help his strengths 10 years ago were too much to overcome.

“I’m just grateful for the opportunity to serve,” Wilson said at the only debate between the candidates in October.

Wilson was first elected to the U.S. House in 2001 after 17 years in the South Carolina Senate.

Also running were Sonny Narang for the Alliance Party and Kathleen Wright for the Constitution Party.

Duncan defeated Democrat Hosea Cleveland, a retired insurance salesman who has run for U.S. House in the past four elections, winning his party’s nomination in 2020 and 2016, when he was unopposed.

The congressional district covers 11 counties in the northwest part of South Carolina west of Greenville and north of Aiken.

Duncan spent eight years in the South Carolina House before running for his U.S. House seat. He is known as one of the most conservative members of Congress.

Republican Rep. William Timmons has been reelected to the U.S. House in South Carolina.

Timmons defeated Democrat Kim Nelson in the district that includes Greenville and Spartanburg.

Nelson was a political newcomer, while Timmons was elected to the U.S. House in 2018 after two years in the South Carolina Senate.

Norman defeated Democrat Moe Brown, a former wide receiver for the University of South Carolina football team who was making his first run at political office.

Norman continues the Republican ownership of the seat that started in 2010 when former chief of staff for President Donald Trump, Mick Mulvaney, defeated John Spratt, a Democrat who had served 14 terms.

Brown touted his days working in the state Commerce Department under former Republican Gov. Nikki Haley. Meanwhile, Norman had Haley in person kicking off his reelection campaign earlier this year.

South Carolina’s longest serving congressman and a leader among House Democrats is heading back to the U.S. House for a 15th term.

The congressional district connects parts of Columbia with parts of Charleston and was drawn to ensure it had a majority of minority voters. Clyburn is the only representative the district has had since it was drawn that way in the early 1990s.

The Navy veteran and tech company employee ran against Clyburn’s experience, saying that although he thought Clyburn was a good and respectable man, no one should serve in the U.S. House that long.

Clyburn’s most visible decision in 2020 was strongly throwing his support behind Democratic presidential nominee Joe Biden at a moment when the former vice president was vulnerable, helping him to a resounding victory in the South Carolina primary and the party’s nomination.

Clyburn raised $3.2 million for what always appeared to be an easy reelection bid, while McCollum didn’t raise enough by the end of October to need to file a federal campaign report.

Mark Hackett of the Constitution Party also ran for the seat.

Republican Rep. Tom Rice has won a fifth term in the U.S. House, remaining the only representative that his South Carolina district has ever had.

Rice defeated Democrat Melissa Watson in the district that stretches from Darlington to Florence to Myrtle Beach. It was drawn in 2012 when South Carolina gained enough population to get a new district. Rice has won every race.

Rice is pushing a proposal that would cut the bill for meals eaten in restaurants on Mondays, Tuesdays and Wednesdays in half, with the government reimbursing the eateries. The half-off deal would last a month.

Republicans made gains in the South Carolina Statehouse including knocking off a Democratic state senator who had served for 16 years and ran unsuccessfully for governor twice.

Democratic Sen. Vincent Sheheen was defeated by Republican Penry Gustafson, a small businesswoman and community volunteer in a district anchored in Kershaw County.

Sheheen ran for governor in 2010 and 2014 and was the author of the bill that removed the Confederate flag from a pole in front of the Statehouse after nine Black church members were killed in a racist attack in 2015 at Emanuel AME church in Charleston.

Republican businessman and lawyer Billy Garrett beat Democrat, Sen. Floyd Nicholson, who was seeking a fourth term in the district around Greenwood County.

Republican started Tuesday with a 27-19 majority.

Just under half of the 124 South Carolina House races have opponents from both major parties. Republicans started Election Day holding 78 seats.