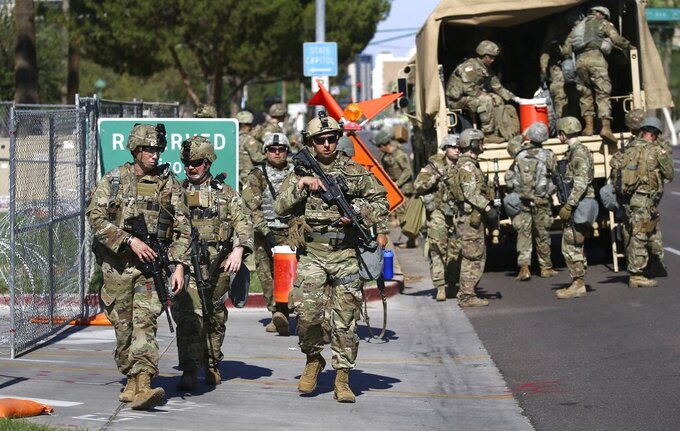 Arizona National Guard troops disembark from military vehicles near the Arizona Capitol on Tuesday, June 2, 2020, in Phoenix, where there have been several days of protests over the death of George Floyd, who died May 25 after being restrained by Minneapolis police. (AP Photo/Ross D. Franklin)

The troops include military police that can assist in crowd control, as well as infantry and logistics specialists, Thacker said Tuesday. Some of the military police have been sent to the state Capitol in Phoenix to help protect against civil unrest. The Capitol complex, including the House and Senate buildings and the executive tower, have been surrounded by temporary fencing.

Other troops are available for deployment in other areas of metro Phoenix and could be sent to towns and cities anywhere in the state, Thacker said. They will be used to free up local police, who have the authority to arrest people.

Protests have erupted in U.S. cities and Europe in the days after the death of George Floyd, a black man who died last week after an officer pressed his knee into Floyd's neck for several minutes even after he stopped moving and pleading for air.

Phoenix, Scottsdale and Tucson have seen protests that led to property damage.

The Guard also is reviewing a request from President Donald Trump to send troops to other areas of the nation to help control crowds, Thacker said.

“Our response is that we are assessing the local situation before we can commit to exporting any forces to other states and territories,” Thacker said.

The Arizona Guard has about 7,600 members and many are already deployed to help boost border control, assist in the state’s response to the coronavirus pandemic and provide helicopter support to wildfire operations, he said. In addition, about 200 soldiers are preparing to deploy overseas.

“We have a lots of plates spinning right now,” Thacker said.

Besides confirming the Capitol operations, Thacker declined to say where Guard members called up to assist with protests are planning to operate, citing security concerns.

About 750 Guard members are still on duty providing virus-related help, including logistics experts who were called up in March to help grocery stores restock after a run on supplies.

This story has been correct to reflect that the statewide curfew begins at 8 p.m., not 9 p.m.