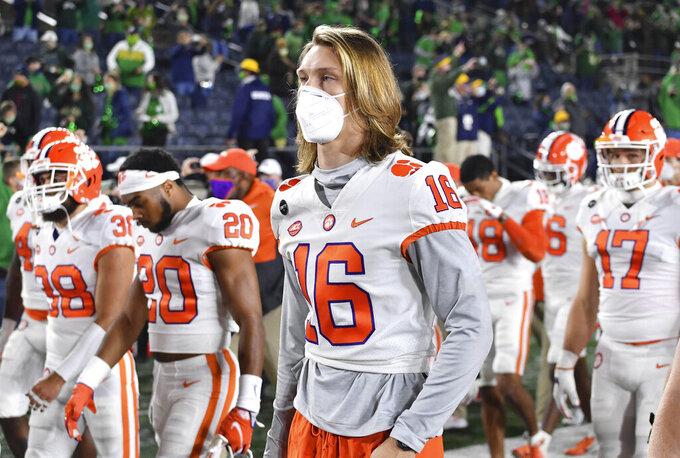 FILE - In this Saturday, Nov. 7, 2020 file photo, Clemson quarterback Trevor Lawrence (16) leaves the field with his teammates after Clemson lost to Notre Dame 47-40 in two overtimes during an NCAA college football game in South Bend, Ind. As virus disruptions mount and the Dec. 19 end of college football's regular season draws closer, the possibility grows that conference championships, major awards and even College Football Playoff participants will be determined by COVID-19. (Matt Cashore/Pool Photo via AP, File)

BOSTON (AP) — By the time the Atlantic Coast Conference came up with a fourth date for the game between Boston College and Louisville, the teams had one week to prepare.

Gone was the bye, and the chance to rest up and heal. Out was the leisurely Thanksgiving meal the coaches could have had with their families. For the players, there would be no frolicsome Turkey Bowl scrimmage with the upperclassmen acting as coaches.

“It’s 2020. It’s COVID,” BC coach Jeff Hafley said after ditching his bye week schedule to get ready for the Cardinals. “If they tell us that we’ve got to play tomorrow, our kids will get out there and play tomorrow. You can’t get mad. You can’t scratch your head. You’ve just got to get ready and feel lucky that we’re playing football.”

As the nation struggles with yet another wave of the coronavirus outbreak, college football teams have been scrambling just to make it to kickoff.

The Apple Cup between Washington and Washington State was called off. No. 18 Wisconsin has canceled three games this season, with the traditional Paul Bunyan’s axe game with Minnesota off the board for the first time since 1906. Last Saturday, No. 4 Clemson showed up in Tallahassee to play Florida State only to return home without playing.

Still, the ACC has managed to navigate the pandemic better than most: Almost every team in the league has played eight or nine games, compared to the Big 12 (where most have played seven or eight), Southeastern Conference (an average of seven games), and the late-starting Big Ten (no team has played more than five games) and Pac-12 (where some have played only one).

“It was remarkable what players across the league did to be able to make that work,” Duke coach David Cutcliffe said. “Some of the other leagues or people that are trying to play, I think things are going to get tough down the stretch."

The game between Boston College and Louisville has taken one of the more circuitous paths.

On the pre-pandemic schedule planned years in advance, they were supposed to play in October. After the coronavirus outbreak forced the ACC to do a total rewrite, the game was placed on the Friday after Thanksgiving. On Nov. 16, the ACC pushed it back to Dec. 12 — one of six games rescheduled because of a flare-up at 10th-ranked Miami.

Last Saturday, the game was moved back to Thanksgiving week. If the Eagles and Cardinals actually make it to field this Saturday, the fourth time will be the charm.

“It’s not ideal,” said Louisville coach Scott Satterfield, whose team already flipped its bye week when an outbreak forced the Nov. 7 game against Virginia to be pushed back a week. “I don’t really fully understand how and why we got to this point, but obviously I had no control over that. ... We will make the most out of it.”

Some games just couldn’t be saved.

When Duke's game against Wake Forest this weekend was postponed because of positive tests and quarantining on the Demon Deacons, Cutcliffe decided to pull the plug rather than reschedule it for Dec. 19. The rest of the students have already gone home, he said, and his players have already been through enough.

“Players do love to play," Cutcliffe said. "I just didn’t feel it was a healthy thing to do, to have two weeks again coming off after sitting three weeks, that it would be the right thing to do to our staff, to our squad.”

“The good thing is, we got it rescheduled and so we’ll get our guaranteed 11 games in. Hopefully,” Pittsburgh coach Pat Narduzzi said, pausing to knock on wood. “But nothing’s surprising me.”

Georgia Tech has yet to play a game in November, with a scheduled bye followed by back-to-back postponements against Pitt and Miami; it is the only Power Five team with three consecutive weeks off. Coach Geoff Collins said the 27-day break — the school’s longest layoff since 1900 — was the equivalent of another training camp.

So the Yellow Jackets coaches threw together a kickball game.

“Just try to be creative and engaging,” Collins said.

Hafley had the same idea when BC was looking at back-to-back bye weeks, including Thanksgiving. With not enough time for the players to return home and go through quarantine again, he was going to set up a lighthearted scrimmage and turn the headsets over to his seniors.

When the Louisville game was moved back to this Saturday, Thanksgiving Day became a regular Thursday practice.

“We’re going to have a bunch of food, we’ll box it up and make sure they have enough to take with them, too," he said. “This is just another sacrifice these guys are making this year, not being with their families.”