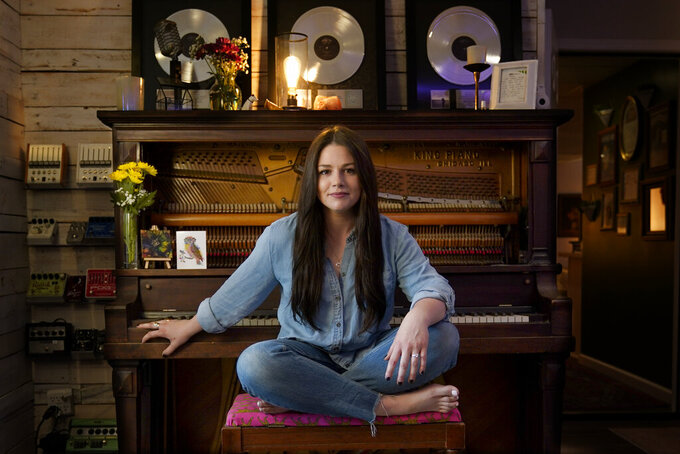 Gena Johnson poses in her home studio in Nashville, Tenn. on April 8, 2021. Johnson, a recording engineer, is the first woman to ever be nominated for engineer of the year by the Academy of Country Music. (AP Photo/Mark Humphrey)

NASHVILLE, Tennessee (AP) — Inside the Nashville basement studio of audio engineer Gena Johnson, she has mementos from many of the artists she's helped to record and who have also shaped her own career.

A turn of the century upright piano that Ben Folds helped her find sits next to the entrance. Polaroids of her and singer Ashley Monroe are scattered on her mixing board, and a sign in the lounge offers a cocktail called Handsome Johnny, a signature vodka drink that the late John Prine named after himself.

Johnson works behind the boards at the premiere studios in town, but her own home studio has the laid-back comfort of a friend's house with enough reminders that Johnson is among the city's top engineers.

But she was still surprised to get woken up with calls one recent morning to learn that not only was she nominated for engineer of the year by the Academy of Country Music, she was also the first female engineer to ever be nominated. The ACM Awards are airing on Sunday on CBS and the studio award winners will be announced at a later date.

“It feels like I’ve been seen by my community and that what I’ve been working for is paying off," said Johnson.

Johnson has worked on hit records by Chris Stapleton, Jason Isbell, Kacey Musgraves, Brandi Carlile and The Highwomen. A friend and fan of Prine's for years, she was in his home to record his last song, “I Remember Everything," which earned Prine two posthumous Grammy Awards this year.

A year after his death from COVID-19 complications, Prine is still a big part of Johnson's life. She easily recounts funny stories of the witty and wise songwriter, who adored Johnson's tiny Chihuahua mix breed pup named June. June slept in a little doggie bed under Johnson's mixing board while she worked on an upcoming Prine live project.

“I actually had tears in my eyes when we were recording because it just felt special,” Johnson said. "I didn’t think it was the last time that John would record anything.”

The Mankato, Minnesota-native came to Nashville after college to work as an intern in a studio, slowly moving up the rungs by learning just about any job there was to do in a studio. Her first big break was working with Michael Wagener, a producer and engineer who has worked with Metallica, Ozzy Osbourne, Skid Row and many other hard rock bands. He showed her a lot of the technical skills and concepts of audio engineering.

She then started working with Folds, who was running the historic RCA Studio A on Music Row, where Dolly Parton had first cut “Jolene.” Later Grammy-winning producer Dave Cobb took over the studio and has continued its legacy, with Johnson by his side for several of the albums he's produced, including Stapleton's 2020 record “Starting Over," which is nominated for album of the year at the ACM Awards.

Monroe, one-third of the country supergroup Pistol Annies, remembered the first time she showed up at RCA Studio A to record vocals for her 2018 solo album “Sparrow." Johnson had put a tiny Zen garden with rocks in the vocal booth for her, along with a fresh bouquet of flowers. The two of them worked together again for Monroe’s upcoming album “Rosegold” coming out on April 30.

“She’s just so wise," Monroe said. “She cares about the words, the songs.”

Her nomination comes as the music industry has been examining the gender gaps and barriers to women and people of color. The Recording Academy started an inclusion initiative in 2019 asking artists, labels and producers to commit to hiring more women for their projects. A study by the Annenberg Inclusion Initiative found that among popular songs on the Hot 100 Year-End Charts from 2012-2017, only 2.6% of engineers/mixers were women, a ratio of 38 men to every one woman engineer.

Despite being in a mostly male dominated field, Johnson has worked with other female engineers, Leslie Richter and Sorrel Brigman, at RCA Studio A. She's also quick to note pioneers in the field that came before her, like Trina Shoemaker, the Grammy-winning engineer for Sheryl Crow’s 1998 hit album “The Globe Sessions,” and Susan Rogers, an engineer who worked for Prince during the 1980s.

“It’s bigger than me because I need to represent in a way and provide space also," said Johnson.

Johnson has been working with and mentoring other new engineers who are just starting their careers. Her advice to those younger engineers is to treat each record they work on like an investment and commit to caring deeply about the music.

“I’m still going to hustle and I’m still going to love what I do. It doesn’t change who I am," said Johnson. "And then also on top of it, being the first woman feels really good, but it also feels like we have a lot more work to do.”