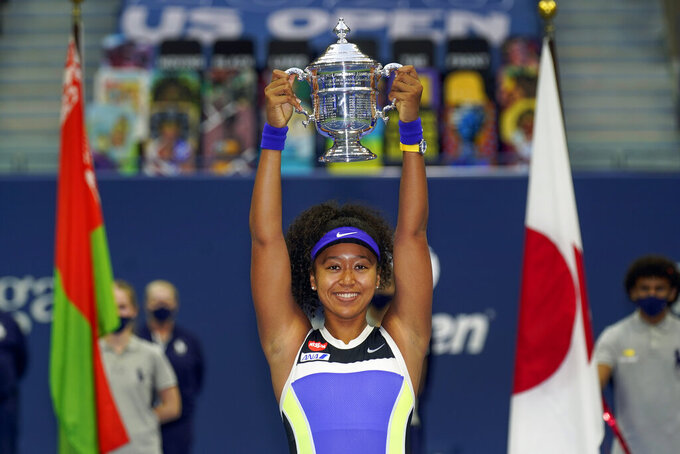 FILE - In this Sept. 12, 2020, file photo, Naomi Osaka, of Japan, holds up the championship trophy after defeating Victoria Azarenka, of Belarus, in the women's singles final of the U.S. Open tennis tournament in New York. Osaka has been selected by The Associated Press as the Female Athlete of the Year.(AP Photo/Seth Wenig)

With tennis, like so much of the world, shut down because of the coronavirus pandemic, Naomi Osaka found herself with time to read and think.

And while she won the U.S. Open for her third Grand Slam title, she also stood out for speaking out about racial injustice and police brutality.

As noteworthy in 2020 for her activism away from the tennis court as her success on it, Osaka was selected by The Associated Press as the Female Athlete of the Year in results revealed Sunday after a vote by AP member sports editors and AP beat writers.

“It was difficult to be isolated from my family for large parts of the year, but that’s nothing compared to others. It was sad to watch and read the news of people suffering from COVID-19, and the economic and social effect on so many — losing jobs, mental health. It was such a tough year for so many people,” Osaka wrote in an email interview. “And then watching the police injustices like George Floyd, Breonna Taylor and Jacob Blake (to name just a few) in the summer broke my heart. I am proud of my U.S. Open victory, but more so that I got people talking about the real issues.”

Osaka collected 18 of 35 first-place votes and a total of 71 points.

WNBA Finals MVP Breanna Stewart was next with nine first-place votes and 60 points, followed by Sarah Fuller, the Vanderbilt soccer player who kicked for the school’s football team, with one first-place vote and 24 points.

LeBron James was announced Saturday as the AP Male Athlete of the Year.

Billie Jean King, a 12-time Grand Slam singles title winner and a pioneering advocate for decades, praised Osaka for positioning “herself as a leader not only in women’s tennis but in all of sports and a force for change in our society.”

“She successfully completed the difficult task of taking excellence in sports performance and using that platform to succeed outside of sports on a much bigger stage,” King told the AP. “She ignited a conversation on social justice, the results of which were bigger than tennis, larger than sports, and in doing so raised the bar for all those who want to leverage the gifts and talents we have to make a difference in our world.”

Osaka went 16-3 during the coronavirus-truncated tennis calendar — the professional tours took about a five-month hiatus; Wimbledon was canceled for the first time since 1945 — and ended the year ranked No. 3.

The defining stretch of Osaka’s season came in August and September, when she compiled an 11-match winning streak that included the U.S. Open.

It was during a tuneup tournament in New York that Osaka — whose father is Haitian and mother is Japanese — declared she would not play her semifinal, joining athletes from the NBA and elsewhere in protesting the police shooting of Blake.

“There are clearly so many worthy issues. This one especially resonated with me because of my own personal up-bringing; and also while the tennis tour was paused, I was able to watch and read news at length for the first time in my life. This summer in the U.S., tensions were high and reached boiling point,” Osaka said. “It was the right time for me to speak up.”

Taking her lead, that tournament shut down completely for a day.

“Her activism has shone a light on how we as individuals and sports leagues can collectively make an impact,” WTA Chairman and CEO Steve Simon said. “Not only is she a phenomenal tennis player, but she also demonstrates how athletes have an opportunity to use their platform for something bigger than the game or themselves. Her actions are nothing short of inspiring and she is so very deserving of this recognition.”

“To be honest, I really didn’t stop to think about what others would think of my actions. Other people’s opinions weren’t going to stop me from doing what I know in my heart was the right thing to do,” Osaka said. “The strong voices of Colin (Kaepernick) and LeBron were certainly positive influences for me and gave me strength in my own convictions.”

Japan, where she was born, is slated to host the postponed Olympics next year.

“I am looking forward most to being with the athletes that had waited and trained for over 10 years, for celebrating a very hard year (2020), and having that happen in Japan makes it that much more special,” Osaka said. “It’s a special and beautiful country filled with culture, history and beauty. I cannot be more excited.”