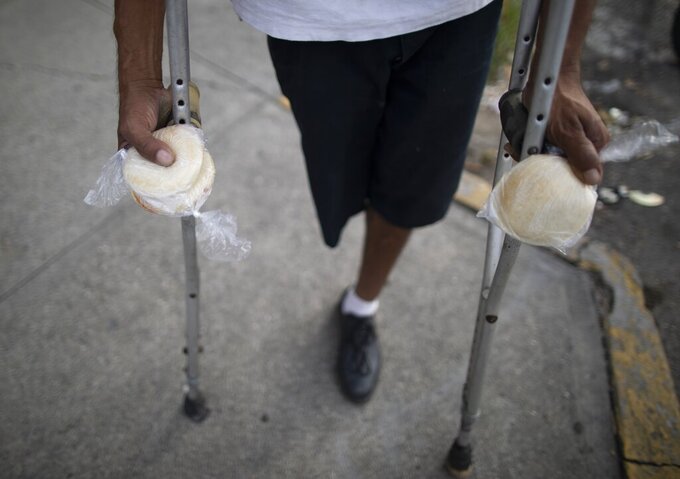 A man on crutches holds packages of homemade arepas given to him by 55-year-old publicist Andres Burgos, who started handing out the corn flour patties to needy children, adults and the elderly, in Caracas, Venezuela, Tuesday, Oct. 20, 2020. Burgos started small with his own money a year ago, passing out a few arepas on his bicycle route from home to the office, or in visits to nearby hospitals. (AP Photo/Ariana Cubillos)

CARACAS, Venezuela (AP) — Andrés Burgos’ world was becoming increasingly solitary. The office of his advertising firm was practically empty, thanks to Venezuela’s crushing economic crisis, and many of his relatives had sought a brighter future abroad.

So Burgos marshaled his cooking skills to reach out to others — the hungry who normally survive by rummaging through piles of garbage for food on the streets of the capital, Caracas.

Burgos, 55, started handing out arepas — Venezuela’s beloved corn flour patties — from the seat of his bicycle to needy children, adults and the elderly. He calls it BiciArepazo, which translates roughly as Bike Arepas.

Burgos started small with his own money a year ago, passing out a few arepas on his route from home to the office, or in visits to nearby hospitals. His efforts have grown steadily after family, friends and small-business owners learned about them on social media and asked if they could pitch in.

In March, after authorities imposed stiff quarantine measures to combat the coronavirus, the number of homeless and even well-dressed people he saw digging through garbage increased.

There’s no denying that food insecurity has deepened among Venezuelan families, said Maritza Landaeta, coordinator at a Caracas-based charity called the Foundation for Food and Nutrition José María Bengoa. She said there’s no safety net for masses of people who survive on informal work, such as selling snacks, cigarettes or coffee on the street.

Hunger was a problem in Venezuela before the pandemic struck. At the end of February, the United Nations World Food Program reported that 9.3 million Venezuelans — almost a third of the population — were suffering from moderate or severe food insecurity.

And the International Monetary Fund predicts that the economy in Venezuela, a once-wealthy oil-producing country, could contract by 25% this year as a result of the global economic chaos unleashed by the pandemic, exacerbating poverty and hunger.

For a year now, Burgos has arisen at 3 a.m. at least five days a week. He kneads a large ball of white corn flour to make his arepas, and fills them with ham, chicken, lentils, carrots or zucchini.

Burgos places each one — still hot from the griddle — into a plastic bag. He ties each with a small knot and drops them in his black backpack.

At daybreak, he grabs the handlebars of his bike and begins his journey.

Some homeless have become regular customers. They rush up when they see him pull up, or hear the whistle he blows. He hands each of them a bag.

“A smile is the best reward,” said Burgos. “It doesn’t weigh me down at all. In fact, I enjoy it.”

Luis Miguel Yajure, a slender, homeless man, said the two arepas Burgos gave him were likely the only thing he would eat that day. Yajure, 25, lost his job at the start of the year and has lived on the streets for eight months.

Thanks to Burgos, he did not need to look for food in a pile of junk and computer parts.

“That man doesn’t ask us for anything,” Yajure said. “He gives them to us with love. It’s tremendous.”

His benefactor dreams of expanding his project to other cities.

“As long as there’s the need and I have the materials and the money to do it, I’ll do it,” Burgos said. “Whatever it takes.”