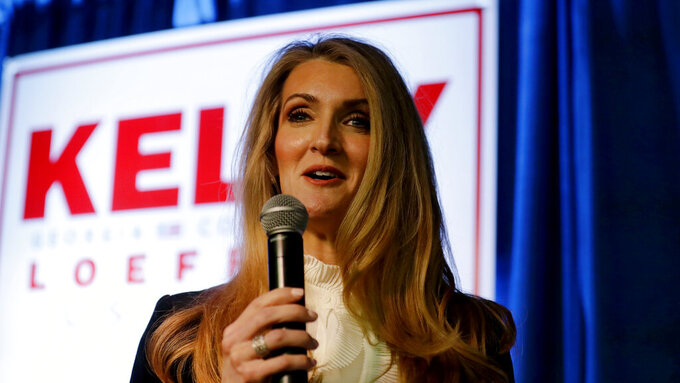 ATLANTA (AP) — Republican Sen. Kelly Loeffler of Georgia is launching a $4 million statewide ad campaign that seeks to rebut criticism of stock transactions she made amid the coronavirus pandemic, as she faces stiff competition in a November special election.

Loeffler’s campaign announced new television, radio and digital ad buys Monday, with three ads set to launch across Georgia on Tuesday. One is titled “Untrue” and takes aim at the scrutiny Loeffler faced in recent months over transactions made just before the virus outbreak sent markets tumbling.

The wealthy political newcomer faces a crowded field as she looks to hold onto the seat to which she was recently appointed. That includes a serious challenger from within her own party in Rep. Doug Collins, a four-term congressman and close ally of President Donald Trump. The race won’t be filtered by party primaries, and all contenders will appear together on the Nov. 3 ballot.

Loeffler and her husband, a wealthy business executive who is chairman of the New York Stock Exchange, offloaded parts of their portfolio and purchased new stocks, including shares in a chemical company that manufactures protective equipment, as Congress was receiving briefings on the growing threat of the pandemic.

Loeffler has said she played no part in the trades, they were managed by third-party advisers and she has not attempted to profit from her time in the Senate. She also announced that she’s selling her holdings in individual stocks.

“Untrue, unfairly targeted, all because she’s a strong conservative woman,” the new ad says, before highlighting a large donation Loeffler made to a Georgia hospital.

Loeffler took office in January after being appointed to fill the seat of retiring Sen. Johnny Isakson.

Her campaign is flush with cash but has been largely self-funded. Campaign finance reports filed in April show that she put $5 million into her campaign in the first quarter of 2020, bringing the total she’s loaned her campaign so far to $10 million. She’s pledged to spend $20 million in total.

Georgia’s other U.S. Senate seat will also be up for grabs in November, with GOP Sen. David Perdue seeking a second term. The dual races have raised the state’s 2020 political profile as Republicans look to hold their Senate majority and the White House.