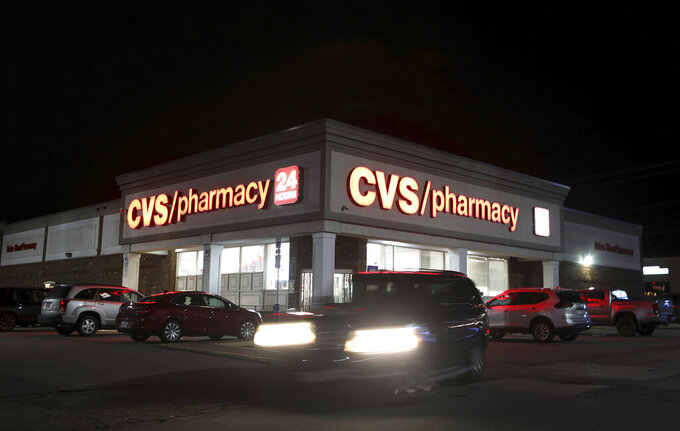 The company covered more people through Medicaid and Medicare Advantage, and adjusted operating earnings from health insurance jumped nearly 20% in the first quarter to $1.78 billion.

But the pandemic has disrupted business at CVS as well. A weak cough, cold and flu season brought on in part by mask wearing and social distancing hurt sales in both the company's drugstore business and its pharmacy benefits management operations, which run drug plans for big clients like insurers and employers.

CVS Health drugstores also faced a tough sales comparison to last year’s first quarter, when customers stocked up on pharmacy supplies as the pandemic set in.

Sales from the front end, or the area outside the pharmacy, of established drugstores fell more than 11% compared to the first quarter of 2021.

Products that help customers deal with colds and the flu are usually a big factor behind first-quarter sales, said Neil Saunders, managing director of GlobalData.

“While CVS has drawn in customers on the testing and vaccination side, there is little evidence to suggest that this is spilling over into the general retail part of its business,” Saunders said in an email.

However, Mizuho Securities USA analyst Ann Hynes said that the vaccine rollout should help the company’s retail sales recover in the second half of the year.

CVS Health operates one of the nation’s largest drugstore chains with nearly 10,000 retail locations. It's doling out vaccines at about 8,300 stores after wrapping up a campaign to vaccinate residents of nursing home and other long-term care locations.

Overall, the company's net income jumped nearly 11% to $2.22 billion in the quarter that ended March 31. Earnings adjusted for one-time gains and costs totaled $2.04 per share, and revenue grew more than 3% to $69.1 billion.

That easily beat average expectations of $1.72 per share in earnings on $68.44 billion in revenue, according to a survey by Zacks Investment Research.

CVS Health started 2021 with an earnings forecast that largely fell short of Wall Street expectations. But it said Tuesday that it now expects annual adjusted per-share earnings to range from $7.56 to $7.68.

Analysts are looking for $7.54 per share, on average, according to FactSet.

The stock had already climbed about 14% so far this year, a slightly better performance than the Standard & Poor's 500 index.

A portion of this story was generated by Automated Insights (http://automatedinsights.com/ap) using data from Zacks Investment Research. Access a Zacks stock report on CVS at https://www.zacks.com/ap/CVS