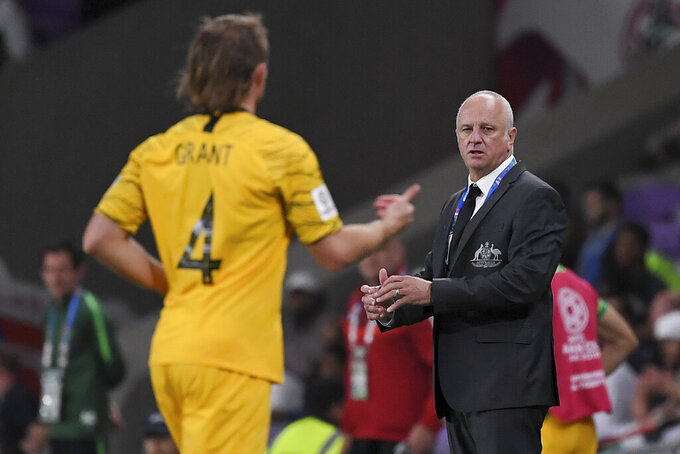 BRISBANE, Australia (AP) — After 18 months without a game, the gathering of Australian players in Dubai ahead of next month’s World Cup qualifiers feels like a family reunion for head coach Graham Arnold.

“The culture I believe in the most is a family culture within the Socceroos,” he said in a video news conference. “The coaching staff are my brothers, the players are my kids.”

In that case, they’ve been very distant relatives, scattered across four continents with the likes of Mat Ryan at Arsenal, Brad Smith with the Seattle Sounders and Adam Taggart in Osaka, Japan.

Arnold announced a squad of 31 players Tuesday, drafting them in from 14 countries for a series of four games in 13 days in Kuwait. Australia resumes the second round of Asian qualifying with a match against Kuwait on June 3.

The Australians will then play Taiwan on June 7, Nepal June 11 and Jordan on June 15.

Arnold's squad scored 16 goals and conceded one to lead Group B in November 2019 with four straight wins. But that was before the COVID-19 pandemic disrupted everything.

While most teams in the top 50 in the world rankings have played matches since the global shutdown started to ease, the Socceroos haven't assembled since a 1-0 win over Jordan in Amman in November 2019.

Domestic and international border restrictions have made selection tricky for Arnold. Australia's A-League is still running, meaning some players were unavailable for the national team, and veterans such as Shanghai-based Aaron Mooy and Celtic midfielder Tom Rogic have withdrawn from selection because of family and injury reasons.

“The way that the world is at the moment with the quarantine side of things and COVID around, it's down to the individual. It's a very strong squad, we've got great depth in every position and I'm excited about the players coming here.”

He said the homecoming formalities would have to be quick, with players joining the coaches in staggered arrivals in Dubai until the squad leaves for Kuwait on May 31. The Australians are missing out on three home games in the second stage after the remaining Group B games were all switched to Kuwait.

The rapid proximity of Australia's last four games in the second stage will help “get rid of the ring rust," Arnold said. “To be able to play four games in a short amount of time and get ourselves ready for the third phase of World Cup qualifiers is important.”

The top team in the group is guaranteed a spot in the third round of Asian qualifying for Qatar 2022. Australia, aiming to qualify for a fifth consecutive World Cup, leads the group with 12 points, two clear of Kuwait and Jordan but with a game in hand.