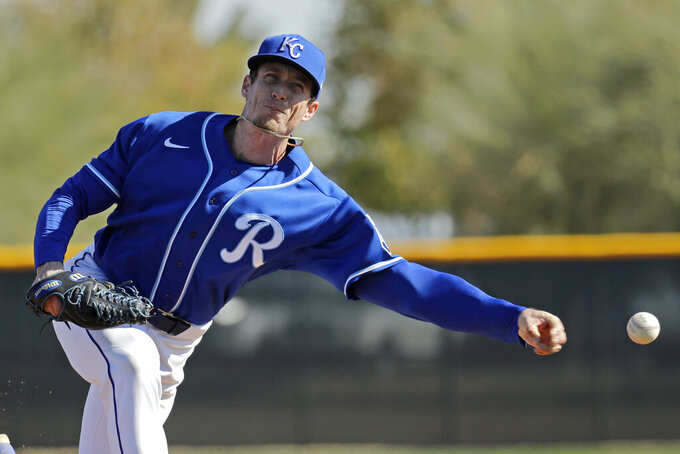 If anybody had a reason to opt out of baseball's restart, it would be him.

Yet there he was, on a blazing evening at Kauffman Stadium, throwing pitches to Kansas City Royals hitters as they prepared for the start of their 60-game season next weekend in Cleveland. One after another, the tall, lanky left-hander with the easy grin, infectious personality and brutal-to-hit sinker-style delivery left the woefully out-of-sync batters baffled.

Cancer couldn't keep Hill in the dugout. The threat of contracting COVID-19 wasn't going to do it, either.

“It's hard to imagine a guy his age going through what he's gone through already,” Royals manager Mike Matheny said, “and I think it's another testament of faith in himself and faith in the process to keep him in a good place, and it also shows how much he loves this group and loves this team and wants to get out and compete.”

Turns out that love will need to extend to the Padres. Hill was traded to San Diego late Thursday for right-hander Ronald Bolanos and outfielder Franchy Cordero, two young players who already have big league experience.

“When you hear stories like that," Matheny said of Hill before the trade was completed, "it brings the onus back on us that we're being as careful as we can for everyone's sake.”

Hill's trouble began about a year after he was drafted out of Bacone College in Oklahoma. He had dominated lower levels of the minors but still felt as if something was amiss. He would get tired walking up stairs, much less running. A routine blood test administered by the club raised red flags, but it was a follow-up colonoscopy that revealed the tumor. The biopsy came back positive for colon cancer, the same disease that claimed his father when Hill was just 17 years old.

There were signs the cancer was beginning to spread, too, so Hill began treatments immediately. The chemotherapy wound up lasting eight months, shrinking him from a sturdy 220-pound athlete to a 150-pound shadow of his former self.

Yet he had survived. And he was ready to get back on the mound.

With the support of the Royals, Hill began to build back his strength. He shot through Double-A in 2016, spent time in the Dominican Winter League, then conquered Triple-A the following year. Hill finally made his big league debut in 2018 and was one of the few bright spots in an otherwise bleak Kansas City bullpen last year.

His spot appeared secure again this spring when the coronavirus pandemic brought baseball to a halt. It left him with a difficult decision. Not only does Hill have a family history of cancer, he also has Lynch syndrome, a genetic condition associated with a higher risk of colon cancer. Those factors left Hill wondering whether he should step on the field when baseball resumed or stick to the sideline, knowing they increased the risk of complications should he contract COVID-19.

To hear it from him, there was never much doubt.

“I stick by my decision, obviously,” Hill said this week. “There's been some concerns with people testing positive, stuff like that. But I still feel like I made the right decision and I'm not really worried about it.”

The Royals have had four players test positive for the coronavirus during their restart — pitcher Brad Keller, first baseman Ryan O'Hearn and catchers Cam Gallagher and Salvador Perez. All of them have been asymptomatic, and Perez returned to workouts this week after he returned two negative tests in a 24-hour window.

But those positive tests only underscored the quiet ease with which the disease can spread, and why nobody would have faulted the 30-year-old Hill if he joined players such as Giants star Buster Posey in skipping the shortened season.

“As far as the procedures the Royals are taking, I think it's made me a little more comfortable knowing they're going to great lengths to protect us,” Hill said. “Some of it seems over the top when you first look at it, but when you start seeing people test positive, you see maybe it's necessary. I think they're doing as good a job as they can do.”

That includes small workout groups, frequent hand-washing and masks worn into the ballpark and around each other — the kind of stuff that is becoming commonplace in all workplaces, not just in the major leagues.

“It's interesting,” Hill said, “because we're coming in staggered. At any given time you look around the locker room, there might be three or four guys in there. It's a little eerie, you could say. It's very different. But as far as getting your work in, I haven't felt cheated in that respect. The workload is good. It's just very different in terms of how we go about it.”