After deadly siege, lawmakers ask why police so outnumbered 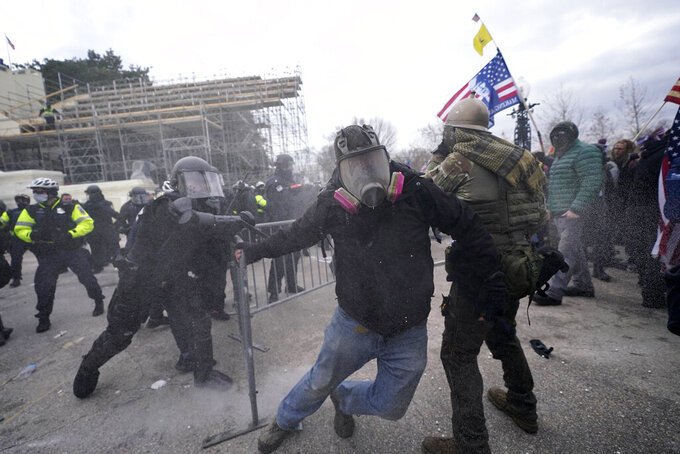 Trump supporters try to break through a police barrier, Wednesday, Jan. 6, 2021, at the Capitol in Washington. As Congress prepares to affirm President-elect Joe Biden's victory, thousands of people have gathered to show their support for President Donald Trump and his claims of election fraud. (AP Photo/Julio Cortez)

Only a few dozen guarded the West front of the Capitol when they were rushed by thousands of rioters bent on breaking into the building. Armed with metal pipes, pepper spray and other weapons, the mob pushed past the thin police line. One rioter hurled a fire extinguisher at an officer, according to video widely circulated on YouTube.

They breached the line moments later, and rioters soon broke into the building, taking over the House and Senate chambers and running wild in Statuary Hall and other hallowed symbols of democracy. The mob ransacked the place, smashing windows and waving Trump, American and Confederate flags. The lawmakers who were voting to affirm President-elect Joe Biden's victory were forced into hiding for hours.

Throughout the melee, police officers were injured, mocked, ridiculed and threatened. One Capitol Police officer, Brian Sicknick, died Thursday night from injuries suffered during the riot. Four other people also died because of the Capitol violence. The melee was instigated by a mob of supporters of President Donald Trump who have professed their love of law enforcement and derided the mass police reform protests that shook the nation last year following the police killing of George Floyd in Minneapolis.

“We backed you guys in the summer," one person screamed at three officers backed against a door by dozens of men screaming for them to get out of their way. "When the whole country hated you, we had your back!”

The rampage shocked the world and left the country on edge, forcing the resignations of three top Capitol security officials over the failure to stop the breach. Lawmakers have demanded a review of operations and an FBI briefing over what they called a “terrorist attack.”

Despite plenty of warnings of a possible insurrection and ample resources and time to prepare, police planned only for a free speech demonstration — a decision that has come under increasing scrutiny since the riot.

Rank-and-file officers “were put in a incredibly dangerous situation. And that’s really where my frustration comes in, said Rep. Tim Ryan, D-Ohio, who leads a subcommittee that oversees the Capitol Police budget.

Police Chief Steven Sund, who along with other top security officials was ousted after the riot, is responsible for protecting lawmakers, “but also making sure that the rank-and-file members are put in situations where they’re as safe as possible and they have the support they need. And that clearly isn’t the case,” Ryan said.

One disturbing video shows a bloodied police officer screaming for help as he’s crushed by rioters inside the Capitol building. The young officer is pinned between a riot shield and metal door. Bleeding from the mouth, he cries out in pain and screams, “Help!”

Other images show police completely overwhelmed by rioters who shoved, kicked and punched their way into the building. In one stunning video, a lone police officer tries to hold off a mob of demonstrators from cracking into the lobby. He fails.

The riot focused renewed attention on Capitol Police, a force of more than 2,300 officers and civilian employees that protects the Capitol, lawmakers, staff and visitors. The agency has an annual budget of about $515 million.

Three days before the riot, the Pentagon offered National Guard manpower. And as the mob descended on the building Wednesday, Justice Department leaders reached out to offer up FBI agents. Capitol Police turned down both offers, according to senior defense officials and two people familiar with the matter.

Like many other agencies, the Capitol Police have been hit hard by COVID-19, with frequent schedule changes for officers and many forced to work overtime to fill out rosters. The pandemic has put the police under strain going into the new session of Congress and the Jan. 20 inauguration.

By Saturday, prosecutors had filed 17 cases in federal district court and 40 others in the District of Columbia Superior Court for a variety of offenses, ranging from assaulting police officers to entering restricted areas of the U.S. Capitol, stealing federal property and threatening lawmakers. Prosecutors said dozens of other people were being sought by federal agents, and the U.S. attorney in Washington vowed that “all options were on the table” for charges, including possibly sedition.

Among those charged was Richard Barnett, an Arkansas man who was shown in a widely seen photo sitting in House Speaker Nancy Pelosi's office with his boots on a desk. He also wrote a disparaging note to Pelosi. Acting Attorney General Jeffrey Rosen called the photo of Barnett a “shocking image” and "repulsive.'

“Those who are proven to have committed criminal acts during the storming of the Capitol will face justice,'' Rosen said.

Two rioters whose photos had become synonymous with the riot were also taken into federal custody and charged on Saturday: Adam Johnson, 36, of Florida, who was photographed walking out with Pelosi’s lectern — where she stood to announce Trump's impeachment — on theft, violent entry and disorderly conduct charges; and Jacob Anthony Chansley, more commonly known as Jake Angeli, who had become a staple in his fur-clad Viking-like costume and painted face at pro-Trump protests across the country.

Also charged was a West Virginia state lawmaker who posted videos online showing himself pushing his way inside the Capitol, fist bumping with a police officer and then milling around the Rotunda as he shouted “Our house!” The lawmaker, Derrick Evans, was arrested by the FBI at his home on Friday and charged with entering restricted federal property.

Sen. Mark Warner, the incoming chairman of the Senate Intelligence Committee, called the Capitol a “crime scene” with evidence that needs to be preserved.

The Virginia Democrat wrote 11 telecommunication and social media companies on Saturday asking them to immediately preserve messaging data and subscriber information from those who may have participated in the attack, saying it was “critical evidence in helping to bring these rioters to justice.” Those companies include mobile carriers AT&T, T-Mobile and Verizon and from the social media world — Apple, Facebook, Gab, Google, Parler, Signal, Telegram and Twitter.

Gus Papathanasiou, chairman of the Capitol Police Officers’ Union, said he was “incredibly proud of the individual officers whose actions protected the lives of hundreds of members of Congress and their staff.”

Once the breach of the Capitol building was inevitable, officers prioritized lives over property, leading people to safety, he said. “Not one member of Congress or their staff was injured. Our officers did their jobs. Our leadership did not. Our law enforcement partners that assisted us were remarkable.”