After a fall, Shaun White stomps his way into Olympic final 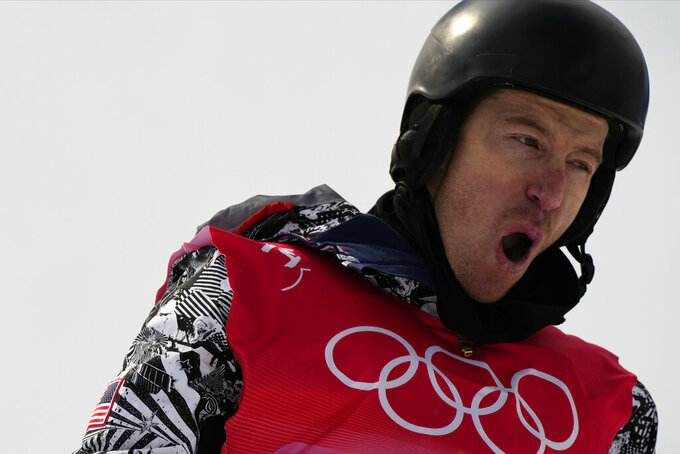 ZHANGJIAKOU, China (AP) — Shaun White let up just the tiniest bit as he jerked his body around for a trick — his signature trick, and a trick he's landed without a hitch hundreds of times before.

After an untimely fall in the first round of qualifying, the most-successful halfpipe rider in history turned the drama up to “11” on Wednesday, coming through huge in a land-or-go-home run that put him into the medal round at his fifth and final Olympics.

White found himself there when he eased up ever so slightly and wound up off-balance for the landing of “The Tomahawk,” — a trick he invented more than a decade ago that involves a frontside takeoff and then 1260 degrees of spin at a diagonal, off-axis angle.

He most famously stuck that trick to cap off the Vancouver Olympics in 2010, in a “victory run” after his gold medal had already been sealed and he was simply showing off for the crowd.

At 35 and with one more contest left in his storied career, White doesn't have that luxury anymore. Still, he wasn't alone in assuming he'd be in a fight to the finish come Friday, where two-time silver medalist Ayumu Hirano and 2018 bronze medalist Scotty James are among those who will be waiting to take his title.

But after the fall in the first of two qualifying rounds, nothing felt certain. In the preliminaries, riders get two chances and their best score counts. The top 12 riders advance. After Round 1, White was in 19th place.

“I was thinking a lot about that, like, how if the next run went terribly, I'd be standing here, talking to everyone over and over about how I'm still happy to be here, but it sucks,” White said. “I'm so thankful I'm not living that right now.”

Though White is no stranger to pressure — he won his third gold medal four years ago with a near-perfect trip on the day's last run — there's something different about riding for gold, as opposed to riding simply to get to the gold-medal round.

But he's been there before, too.

He fell in the first round of qualifying at his first Olympics, in 2006 in Italy. He spent the time in between rounds simply doing free-rides through the Alps and trying to take his mind off the immense task ahead. He made it through and won the gold medal.

Sixteen years later, it was same deal, different continent. Over a tense 50 minutes, he took three or four rides through the hills to stay warm.

“He was doing his thing, and he jumped on the T-bar and they got me on the radio and said, ‘Have you seen Shaun?’” U.S. coach Mike Jankowski said. “I said, ‘He’ll be there in just a moment.' He literally slid right into the start gate and just dropped. It worked out great.”

The second run was smooth as silk — a pair of double-cork 1080s to start, his famed comma-shaped “sky hook” in the middle, then the Tomahawk and then another double-cork 1260 to cap it off.

He tore off his goggles and let out a huge “Yeaahhhhh” after he crossed the line.

Chloe Kim, who earlier had breezed through her own qualifying round, was in the crowd and cheered. White's score popped up and he was in fourth. It means he'll be the fourth-to-last rider to go in all three of Friday's decisive rounds. Not a bad position to possibly put some pressure on the three who finished ahead of him — Hirano, James and Hirano's Japanese teammate, Ruka Hirano, all of whom have the vaunted triple-cork jump in their bag of tricks.

“Today we were told a lot, because you put a run down and then you see if the judges like you,” said White's coach, JJ Thomas. “He got fourth place with what, for him, is kind of a conservative run. He's got a lot more in the tank.”

He appears psyched to use every last drop.

In years past, his interviews after qualifying would've been quick-soundbite affairs. This time, White lingered, reliving every moment, getting more expressive as he made his way through the line, never tiring of being asked the same questions over and over.

“I knew I could do it, and I put the run down, and I'm going to be ready to fight it out in finals, as well,” he said.

So nice to have one last chance. But before that, he had some explaining to do.