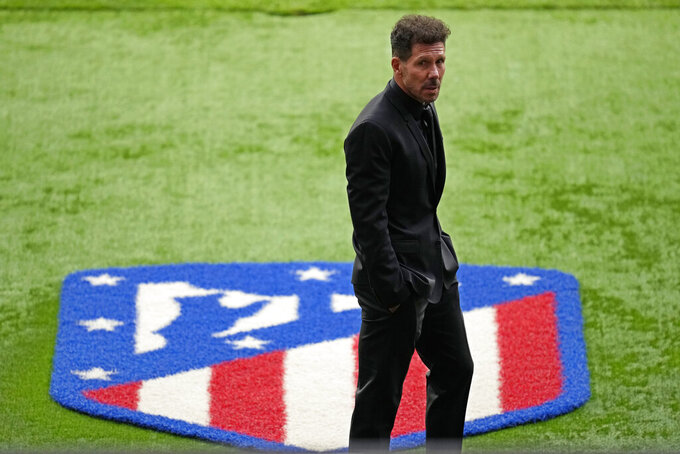 Atletico Madrid's head coach Diego Simeone stands by the club's official emblem waiting for the team to receive the trophy at the Wanda Metropolitano stadium in Madrid, Spain, Sunday, May 23, 2021. Atletico Madrid survived a dramatic final round to clinch its first Spanish league title since 2014 with a 2-1 come-from-behind win at Valladolid on Saturday. (AP Photo/Manu Fernandez)

MADRID (AP) — Nothing really came to Diego Simeone's mind after his Atlético Madrid side finally clinched the Spanish league title. So he just started laughing.

“My first reaction was to start laughing,” he said. “It came out naturally. I don’t know why, but I laughed, I just laughed.”

Atlético had just rallied to defeat Valladolid 2-1 and win its first league title in seven years on Saturday. It was the team’s 11th league title, and third since 1996, when Simeone still played for the club.

“It was a happy feeling that came from inside,” Simeone said. “We were able to do it again.”

There was reason for Simeone to be relieved, with the triumph coming after a tense final stretch of the season in which the team blew a big lead and allowed Real Madrid, Barcelona and even Sevilla to get back into the title race.

But for Simeone it wasn’t about being relieved. It was about the reassurance the title brought of being part of a successful project at a club that will keep growing.

“In my loneliness before the match, I was remembering about the time when we were bidding farewell to the (Vicente) Calderón (Stadium in 2017), and people asked me if I was going to continue or not, and I said ‘yes,’ I said that I was going to stay, because I believed that the club had a future. And I wasn’t wrong. The club has a future.”

Saturday’s league title was the eighth trophy that Simeone helped Atlético win since he arrived in late 2011. He is now the club's most successful coach, surpassing the seven titles Luis Aragonés won with Atlético. Simeone’s other titles with the club include two Europa Leagues, two European Super Cups, a Spanish Super Cup and a Copa del Rey.

“The club is growing, and it can keep growing,” the 51-year-old Simeone said. “Hopefully we can help it keep growing.”

Simeone’s contract ends in 2022 and club president Enrique Cerezo made it clear on Saturday that the coach will stay for much longer if he wants to.

For his part, Simeone said there’s no need to think about his future after such a successful season.

“What is important is what the team and the club did this season, and that it’s constantly growing,” Simeone said.

Barcelona and Real Madrid had won all the league titles since 2014, but Atlético has been gradually moving closer to the Spanish powerhouses under Simone.

Simeone and the players were handed the league trophy in an empty Wanda Metropolitano Stadium on Sunday. Fans were not allowed in the stadium because of the coronavirus pandemic, but they filled some of the streets of Madrid as the team paraded across the Spanish capital.

The Argentine coach was key in helping revamp the squad after the departures of club veterans such as Diego Godin, Filipe Luis and Antoine Griezmann. He had to rebuild the team almost from scratch but made it a contender again in only two seasons with the likes of Luis Suárez, João Félix and Marcos Llorente.

They were among the players throwing Simeone up in the air to celebrate at the José Zorrilla Stadium in Valladolid on Saturday.

Simeone said he had help from many people in keeping the players focused during the final stretch of the long campaign. He said that with about five rounds to go he gathered workers at the club and asked them to greet the players differently every morning.

“I told them that instead of saying ‘good morning,’ they had to greet the players by saying ‘we are going to be champions,’” Simeone said. “And that was how the players were greeted every day.”

“We were lucky," Simeone said, with a smile, "We could reach our goal.”