After rough start, MLS bubble in Florida seems to be working 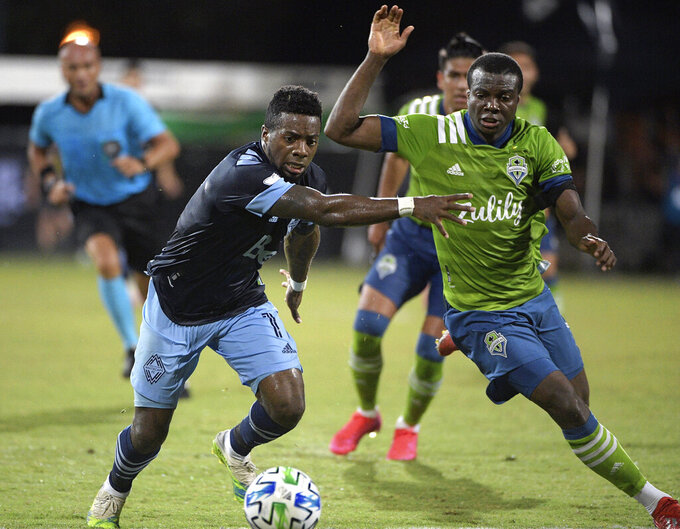 About a month into his stay, the number of restful, relaxing moments have been rare.

Agoos is the senior vice president of competition, operations and medical administration for MLS. He’s been at the point of helping run the MLS is Back tournament inside its contained environment at the Walt Disney World Resort.

Making sure the competition has run smoothly on the field through the group stage, which ended Thursday, and into the knockout rounds that begin this weekend has been a priority.

But the No. 1 task has been keeping the coronavirus out. After the tournament seemed to be on the verge of derailing at the start with virus outbreaks inside the FC Dallas and Nashville camps, the bubble seems to be working.

Outside of those two teams, there have been only two confirmed positive tests — one from Sporting Kansas City and one from Columbus soon after teams arrived in Florida.

“Once we were able to, I think, get through that, which was a real challenge ... we felt like we have a real controlled environment in a centralized location,” Agoos said. “We have really stringent testing protocols and medical protocols. We’re very vigilant about wearing face masks and social distancing. We’re trying to try to stay as vigilant as we can on ensuring that we’re creating the safest environment for our players and our staff.”

Over the past six testing periods, the league has not recorded a positive test among the players, coaches and staff. Agoos was quick to credit the players and teams for being diligent about observing the restrictions, and in some ways appearing to learn from the issues that arose with Dallas and Nashville.

“I think it was a wake-up call for any team that didn’t believe that they could be impacted to see how strong and how widespread it can be and how quickly it can spread,” Agoos said. “We’ve had some cases where we’ve had a false positive on some teams, so that was obviously a wake-up call. But I think overall our clubs have really done a good job driving home the fact that the virus is going to do what it’s going to do.”

While life in the bubble can be monotonous, the league and the teams have tried to liven it up as best they can with health and safety still being the overriding priority. Philadelphia coach Jim Curtin noted that the simple surprise of minority owner Kevin Durant jumping on a Zoom call with his players was an instant boost.

“It can get monotonous, but there’s certain nights where we get to go to the restaurants that are here and you’d be amazed at how much it means to eat off of a real plate with real silverware,” Curtin said. “That’s going to sound strange to people, but we’re mostly eating out of Styrofoam with plastic knives and forks. So these little things are big time.”

The league's next step after the tournament wraps up on Aug. 11 is unclear. The MLS hopes to have a regular season involving home markets but how extensive that may be has yet to be determined.

“The timeline of that, or how many games, or this and that, I have no idea. There’s so much uncertainty about that. But I can tell you that soccer, playing, it’s our passion, it’s what we get paid to do, it’s what we love to do,” said Union midfielder Alejandro Bedoya.

Agoos believes there are lessons from the bubble that can be applicable in trying to pull off games at home.

“I think we’re all standing shoulder to shoulder with each other and making sure that we’re going to do the right things,” Agoos said. “Where we need to step in, or where we can help and provide resources, we certainly will. But it’s a collaborative effort, it’s going to take everybody doing the right thing. And again, we can’t lower our guard and make sure we’re fighting this with everything we have.”

While there are several interesting matchups in the round of 16, the marquee match will be Monday night when the reigning MLS Cup champion Seattle Sounders face last year’s Supporters’ Shield winners LAFC. The game is a rematch of last year’s Western Conference final, where Seattle upset LAFC 3-1.

Another good matchup comes next Tuesday when Columbus faces Minnesota United. The Crew were the only team in the group stage to post three victories.