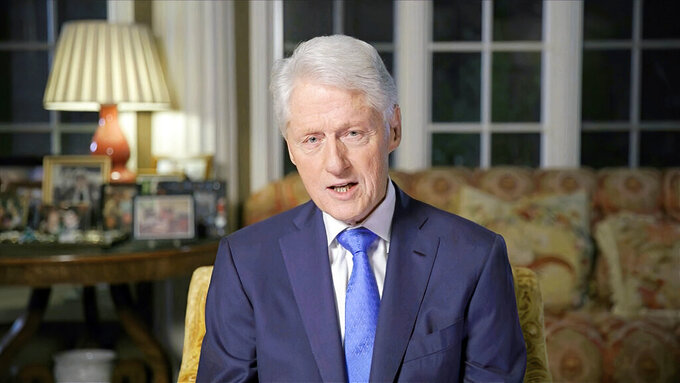 But when the former president delivered his 11th speech to his party's faithful gathered virtually on Tuesday, it was like none in his four decades of convention moments.

Clinton's remarks to the fully online gathering were pre-recorded at his home in Chappaqua, New York, like many of the speakers in a political year upended by the coronavirus. And they were brief at just under 5 minutes, which was all the former president was allotted by a party eager to show it is moving out of the politics of the past.

Clinton didn't mince words. He tore into President Donald Trump repeatedly, making reference to his own understanding of the demands of the role.

“If you want a president who defines the job as spending hours a day watching TV and zapping people on social media, he’s your man,” Clinton said.

He added of the pandemic, “Denying, distracting and demeaning works great if you’re trying to entertain and inflame. But in a real crisis, it collapses like a house of cards.”

Even abbreviated, Clinton's appearance was tricky for his party. Many Democrats are searching for new leaders, even as they nominate former Vice President Joe Biden, and pushing for a liberal agenda that leaves behind the centrist politics of the Clinton era. Further complicating the moment for Clinton is the #MeToo movement, which has forced some women to reevaluate Clinton's history of sexual misconduct allegations.

The former president spoke early in the evening, shortly after former President Jimmy Carter. Clinton's remarks went beyond the blistering speech he delivered during his 2016 convention address — when he helped the party formally choose his wife, Hillary, as its presidential nominee.

Clinton stressed what he described as Trump’s economic failures amid the coronavirus' spread, arguing that the fallout on families and businesses wouldn’t be nearly as dire had Trump not so bungled the federal government’s response.

“At a time like this, the Oval Office should be a command center. Instead, it’s a storm center,” Clinton said. "There’s only chaos. Just one thing never changes — his determination to deny responsibility and shift the blame. The buck never stops there.”

Clinton praised Biden, calling him a "go-to-work president. A down-to-earth, get-the-job-done guy." But he focused most of his energy on Trump, imploring the audience, “You know what Donald Trump will do with four more years: blame, bully and belittle.”

Clinton, who turns 74 on Wednesday, is three years younger than Biden and remains a force within the party — even though it has left behind many of the market-based reforms and centrism he popularized in the 1990s.

Former California Gov. Jerry Brown, who unsuccessfully ran against Clinton for the Democratic nomination in 1992, said it's impressive how the former president has continued to carve out a role for himself in Democratic politics. But nothing lasts forever.

Clinton was a visible part of the 2016 convention and campaign, even as Trump repeatedly raised the former president's past — and invited a group of the former president's accusers to attend a debate. The move was an attempt to counter the criticism Trump received after video surfaced of Trump bragging about kissing, groping and trying to have sex with women who weren’t his wife.

This time, Clinton's role was limited in a way he hasn't experienced since the conventions of 1980 and 1984, when he spoke but wasn't among the keynote headliners. His debut for most of the country came in 1988 — before rising star New York Rep. Alexandria Ocasio-Cortez was born — when his speech was so long that he famously drew applause when he declared, “In conclusion.”

Four years later, Clinton was the nominee and delivered his acceptance speech. He addressed the convention as president in 1996 and 2000. But he may be best known for his convention speech in 2012, when he was widely credited for making a more passionate and crisp case for why Barack Obama deserved a second term than Obama did himself.

That address from eight years ago went well over Clinton's allotted time and lasted nearly 50 minutes — or 10 times how long he spoke Tuesday.