Ahead of Harris meeting, Mexico president accuses US 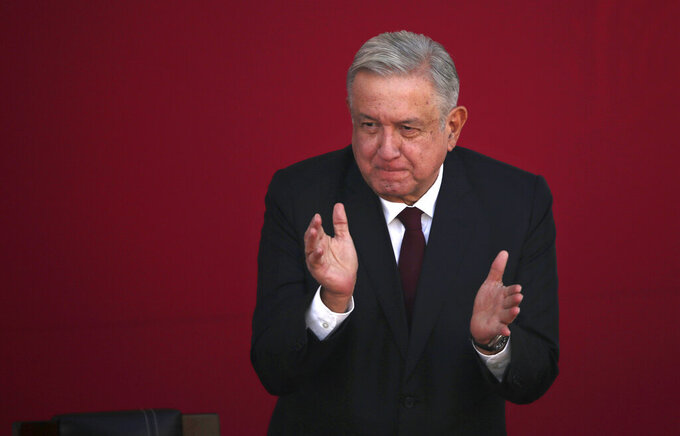 The issue apparently didn't arise in the meeting with Harris: “It's not on the agenda and it's not our intention to create a bad atmosphere," López Obrador said ahead of the talks.

The meeting itself — the portion made public — focused on immigration, a key issue in U.S.-Mexico relationship along with trade, border security and the pandemic.

“We are going to help” on immigration, López Obrador told Harris. “You can count on us.”

But with Mexico facing key congressional and state elections on June 6, the nationalist president dedicated a good part of his news conference earlier in the day to expressing outrage over a funding decision by the U.S. Agency for International Development.

“It is an interventionist act that violated our sovereignty,” said López Obrador, who added that Mexico had filed a diplomatic note with the U.S. Embassy.

Less than two hours later it was all smiles and compliments when López Obrador and Harris met — at least in the publicly shown prelude to the closed meeting, which comes ahead of a planned actual visit by Harris on June 8.

López Obrador commended U.S. President Joe Biden for giving Harris the responsibility of finding ways to address the root causes of migration, and he said he planned to pitch again a proposal he floated last month at Biden's climate summit.

The Mexican president wants the U.S. to fund a major expansion of one of his signature programs, “Planting Life,” which provides cash payments to farmers who plant certain fruit and lumber trees. The aim has been to help keep Mexicans in their rural communities.

Mexico has offered it as a way to help in Central America too. The more challenging part of López Obrador's pitch is that the U.S. grant six-month work visas, and eventually citizenship, to those who participate in the program.

The Biden administration, like the Trump and Obama administrations before it, has been overwhelmed by the number of migrant children and families arriving at the U.S.-Mexico border and looked to Mexico for help in slowing transit across its territory.

Most of the migrants come from Central America, though the number of Mexican migrants has risen as well. Harris is also scheduled to visit Guatemala June 7.

“We agreed to work together to establish a strategic partnership to address root causes of migration, spur economic development, and expand security cooperation,” Harris wrote later Friday on Twitter.

Criticism that Mexico has enforced U.S. immigration policy at its own southern border has not appeared to affect López Obrador's popularity at home. He said Friday he agreed with the Biden administration's approach.

Speaking earlier to his domestic audience, López Obrador responded to questions from a reporter from online news magazine Contralinea about its report of U.S. financing for the anticorruption organization Mexicans Against Corruption and Impunity.

The organization has issued reports critical of some of López Obrador’s major initiatives, including the cancellation of a partially built Mexico City airport and the construction of a tourist train around the Yucatan Peninsula.

In the diplomatic note shown by López Obrador Friday, Mexico assures that it respects the role of civil society organizations and shares an interest in eliminating corruption, but said that people connected to the group “have been explicit in their political militancy against the government of Mexico.”

The note, dated Thursday, asked the U.S. Embassy to confirm financial support from the U.S. Agency for International Development and if so, suspend it. USAID often supports civil society groups, usually related to human rights or democracy promotion, in many countries. In some countries, such groups sometimes run afoul of local governments.

In 2013, Bolivia's then-President Evo Morales expelled USAID from his country, alleging that it was working to undermine his government.

The anticorruption organization said Thursday via Twitter that the complaints displayed a serious misunderstanding of international cooperation. “We reiterate the absolute legality of our work,” it said, rejecting any suggestion of interventionism and asking for what it said had become constant attacks from the government to stop.

A U.S. State Department spokesman said Friday: “As the Vice President said today, Mexico is our closest neighbor. We share not only a border but the values of dignity and respect. We have built a productive partnership to address the causes of insecurity, and that partnership has never been more important.”