Aid for Navajo ranchers hit by drought, pandemic on its way 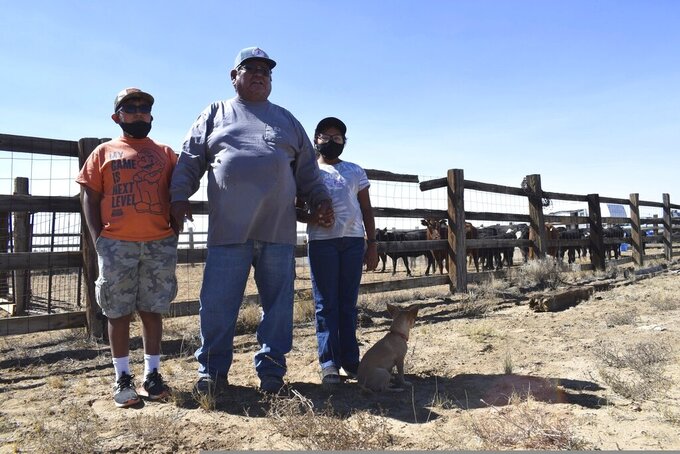 In this Oct 1, 2020 image, Navajo rancher Timothy Largo and his grandchildren pose for a photograph outside a corral at the Sims Ranch near Crownpoint, New Mexico. Navajo ranchers impacted by the pandemic and ongoing drought may soon qualify for assistance to supplement their livestock with hay and grain. (Vida Volkert/Gallup Independent via AP)

WINDOW ROCK, Ariz. (AP) — Navajo ranchers impacted by the pandemic and ongoing drought may soon qualify for assistance to supplement their livestock with hay and grain.

The Navajo Nation Council passed legislation earlier this year to allocate $4 million for hay, grain and livestock feed for distribution to ranchers and livestock owners through the Sihasin Fund Pasture Range and Forage Expenditure Plan.

The assistance was supposed to go to the 110 chapters that make up the Navajo Nation months ago, but internal issues at the Navajo controller’s office caused a delay, according to Navajo Nation Council Delegate Mark Freeland, who co-sponsored the legislation.

Freeland told the Gallup Independent during an interview that the Navajo Nation is now in the process of developing a mechanism to disburse the money to the chapters and help the ranchers.

Freeland, who represents various chapters on the Eastern Agency, said he has been hearing from ranchers who are struggling as a result of the drought. He cited the loss of forage on the range, feral horses competing with cattle and the lack of rain.

“We need rain,” he said. “We are on a very severe drought. How are we going to battle that? We need to be proactive with livestock reduction.”

Freeland added that the pandemic also contributed to the ranchers’ struggles. Several slaughter facilities in the United States were closed for a few months throughout the pandemic, resulting in an excess of cattle that has caused market prices to go down.

“They are not getting their fair market value. Cow prices are down. The demand outweighs the supply,” he said.

Navajo Nation Agriculture Department Director Leo Watchman said Tuesday that ranchers are being advised to keep track of their losses and expenses and reduce the number of livestock under a plan to restock or defer operations.

The most recent federal drought monitoring reports indicates that all of the Southwest is experiencing some level of drought, and forecasts suggest these conditions are expected to continue through the summer. As of mid-May, 93% of the Southwest and California were in drought, with 38 % of the region in exceptional drought, which is the highest level.

According to officials with National Integrated Drought Information System, high temperatures and very low rainfall totals through spring and summer of 2020 set new records across the Southwest. They also have said that the combination of extremely low soil moisture leading into winter and snow drought through winter means that run-off in the spring of 2021 has been very low.