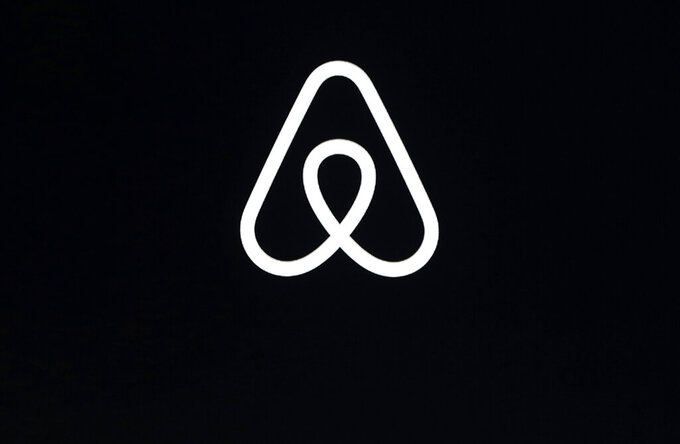 FILE - This Feb. 22, 2018, file photo shows an Airbnb logo during an event in San Francisco. Home-sharing site Airbnb posted a $3.9 billion loss in the fourth quarter of 2020 as it suffered from the pandemic downturn in travel and recorded one-time costs for becoming a public company. (AP Photo/Eric Risberg, File)

Home-sharing site Airbnb posted a $3.9 billion loss in the fourth quarter of 2020 as it suffered from the pandemic downturn in travel and recorded one-time costs for becoming a public company.

In results released Thursday — Airbnb's first as a publicly traded entity — the company took a charge of $2.8 billion for stock compensation related to the IPO. A year earlier, Airbnb lost $352 million.

Revenue fell 22% to $859 million in the quarter that ended Dec. 31. That was still more than analysts expected, according to a FactSet survey, and a far smaller percentage decline than reported by rivals Expedia, Tripadvisor and Bookings Holdings.

Airbnb declined to offer a forecast for 2021 profit and revenue. Company executives said they are upbeat about a recovery, but they said the unknown pace of vaccinations make it difficult to know how quickly people will be willing to travel. The company did say revenue will not decline as much in the current quarter as it did in the fourth quarter of last year.

In late January, Airbnb said a survey it commissioned showed that just over half of Americans have already booked a trip or plan to travel this year.

Since the start of the pandemic, Airbnb has shifted its focus to beach towns and mountain destinations — outdoorsy places where the risk of contracting the coronavirus is perceived to be lower. The company expects rentals in big cities to come back last.

It has also slashed costs and jobs to ride out the pandemic, much like airlines and others in the travel industry.

CEO Brian Chesky said his company will benefit from changes in travel and jobs as many people work from somewhere other than the office — maybe a rental far from home.

“When travel comes back, we believe it will look different than before,” Chesky said on a call with analysts. “People are living more nomadically. Some people are taking longer-term stays, one or two months at a time in Airbnb.”

The company is counting on adding hosts. It believes that people who book long-term rentals will also turn to Airbnb to rent their empty homes.

For all of 2020, Airbnb lost nearly $4.6 billion including the charge for stock-based compensation and a separate charge of $827 million for stock warrants tied to a loan. That compared with a 2019 loss of $674 million. Even as revenue increased, the company also lost money in 2017 and 2018 as it spent heavily on marketing and technology and added new lines to the business.

Despite the years of losses, Airbnb generated sky-high expectations from investors, which led to a winning debut on the stock market in December, when its shares more than doubled the San Francisco-based company’s target price and gave it a valuation of just over $100 billion. At $3.7 billion, it was the biggest U.S. IPO in 2020, according to Renaissance Capital.

Airbnb faces challenges, including opposition from hotels. Some cities have stepped up restrictions on short-term rentals. Critics say Airbnb contributes to higher rents and home prices in some markets. Some of the company’s hosts aren’t just sharing their homes, they are turning them into businesses catering to tourists, reducing the supply of housing for local residents, according to some researchers.

Before the release of financial results, the company's shares fell 9.1% to close at $182.06. They rose less than 1% in after-hours trading.

David Koenig can be reached at twitter.com/airlinewriter