Akiyama, Gray among hurting Reds who will miss opening day 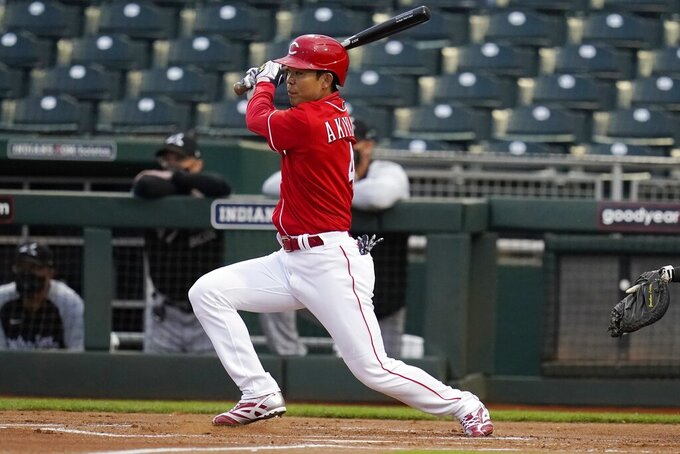 Cincinnati Reds' Shogo Akiyama, of Japan, follows through on his swing as he hits an infield grounder against the Chicago White Sox during the first inning of a spring training baseball game Thursday, March 11, 2021, in Goodyear, Ariz. Reds' Akiyama was out at first base on the play. (AP Photo/Ross D. Franklin)

Spring training took its toll on the Cincinnati Reds, and some key players who suffered injuries won't be back in time for Thursday's opener.

Outfielder Shogo Akiyama (hamstring), and pitchers Sonny Gray (back) and Michael Lorenzen (shoulder strain) will miss the opener but aren't expected to be sidelined too long after that.

The good news is first baseman Joey Votto, who missed 13 days of spring training with COVID-19, has eased his way back, hit the ball well and looked solid in the field during the final spring training games. He appears to be in position to start on opening day for the 13th consecutive season, but that decision has yet to be made.

Outfielder Nick Senzel also is expected to be on manager David Bell's lineup card Thursday after dealing with a groin strain this spring. Tejay Antone, who was a candidate for Cincinnati's starting rotation, was hampered by minor groin and hip issues. He didn't get enough innings to earn a starting role but is expected to be fine for bullpen work.

When Votto got healthy again and returned from isolation on March 20, he saw the Reds infield had gotten a shuffle. Slugging third baseman Eugenio Suarez was moved to shortstop in the middle of spring camp, a situation that will stick for now.

“It is looking like he's going to end up being the everyday shortstop,” Reds general manager Nick Krall said.

Mike Moustakas then made the shift from second base to third base, where he has played for most of his 11-year major league career. Thanks to a productive spring, Jonathan India will be the likely starter at second base. If that happens, he'll be the first Reds rookie to start at second since Pete Rose in 1963.

With Gray sidelined — and NL Cy Young Award winner Trevor Bauer gone via free agency — the rest of the Cincinnati starting rotation has to be ironed out but is likely to include Tyler Mahle, Wade Miley, Jeff Hoffman and José De León.

New faces in the Reds bullpen include left-hander Cionel Perez, acquired in a trade with Houston, and right-hander Cam Bedrosian, a veteran who came to camp on a minor league deal. Both earned spots on the roster with good springs.

Lucas Sims, Amir Garrett and Sean Doolittle will make up the committee of closers.

The Reds must find a way to boost last season's .212 team batting average, the worst in the major leagues. Krall has specific ideas about where he expects to see strides in the first month or two of the season.

“One, we want to have some of the injuries starting to die down, where we can get some of these guys back after the first few weeks,” he said. “Two, it’s guys from last year who will revert back to (the numbers on) their baseball cards, and three, it’s the young guys who make the team taking a step forward.”

Because of continuing COVID-19 restrictions in Ohio, the Reds will open with a capacity crowd of around 12,000 at Great American Ball Park — the first game at the stadium with fans in more than 18 months.

Kyle Farmer, who auditioned at shortstop but made the roster again because of his versatility, said he's eager to play in front of people again in Cincinnati, where opening day has always been a holiday.

David Bell rejoined his team in Goodyear, Arizona, on Monday after some time away due to the death last Friday of his brother, Minnesota Twins bench coach Mike Bell, who had cancer.