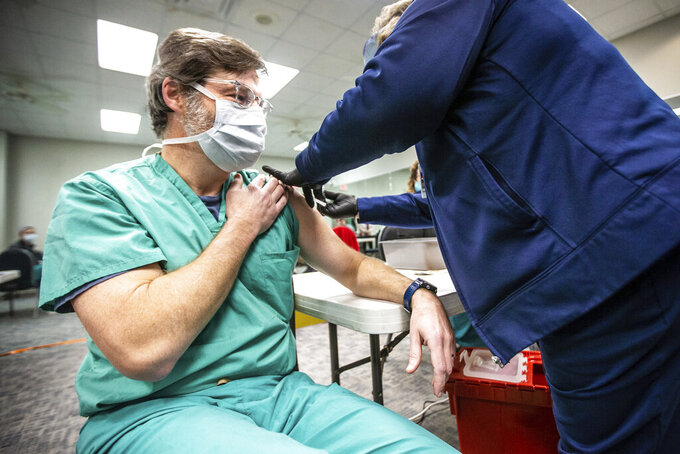 Dr. Lynn Ridgeway, a pulmonologist, pulls up his sleeve as he receives one of the first Pfizer-BioNTech COVID-19 vaccines given to front line workers at Helen Keller Hospital on Thursday, Dec. 17, 2020, in Sheffield, Ala. [Dan Busey /The TimesDaily via AP)

BIRMINGHAM, Ala. (AP) — Deaths linked to COVID-19 climbed above 4,670 in Alabama ahead of Christmas, which health experts fear will lead to even more illness and misery because of holiday travel and family gatherings.

With the state adding more than 4,000 new cases of the illness daily over the last week and hospitalizations above 2,500 people statewide, researchers at Johns Hopkins University said the state's pandemic death toll of 4,676 ranked 24th in the nation.

New treatments have developed since the virus took hold, and the state's death rate actually is lower than in the spring, said Dr. Michael Saag of the University of Alabama at Birmingham.

"The reason for that is we know more (about) how to manage patients," he told a news briefing this week. But the sheer number of deaths is increasing rapidly because so many more people are sick now than months ago, he said.

Deaths typically lag by several weeks after someone gets sick, Saag said, so the number of deaths in Alabama could increase “pretty substantially” by mid-January given the surge in cases linked to Thanksgiving and another one expected after the Christmas and New Year period.

Intensive care units in Alabama hospitals already are more than 90% full, according to figures from Health and Human Services, so the state’s health care system is badly strained after months of caring for people ill with COVID-19.

Wearing masks and staying away from others while the national vaccination program is just beginning could help slow the spread of the virus, Saag said.

“Across the country now we're having about 3,000 deaths a day. When you think about it, that's equal to a 9/11 every single day. Every day we have the same number of people dying from COVID as we had on that one day back in September 2001. That, to me, is unacceptable,” Saag said.

The virus is particularly dangerous for the elderly and people with serious health problems, but it causes only mild to moderate symptoms in most people.