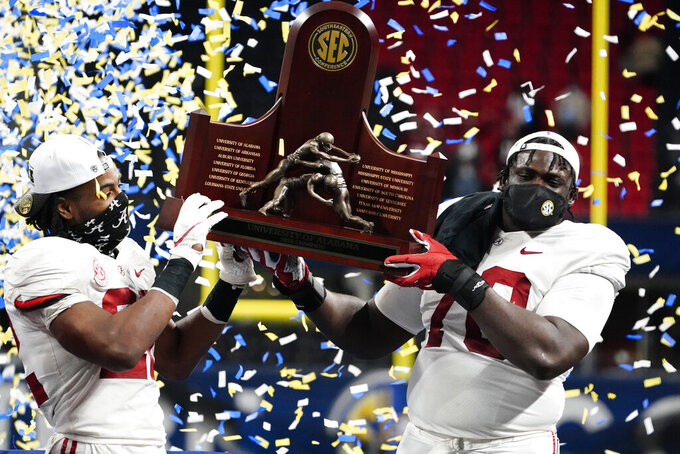 The semifinal game to be played Jan. 1 has been moved from Pasadena to AT&T Stadium in Arlington, Texas, ostensibly based on the growing number of COVID-19 cases in the Los Angeles area, but more significantly because of the resulting ban on fans at spectator sports in California.

It's still unclear whether the game in the Dallas Cowboys' stadium will be called the Rose Bowl, but the decision ended a streak of 78 straight years in Pasadena for a bowl game first played in 1902.

The festive week of genteel celebrations around the Rose Bowl game already had been mostly canceled, interrupting a beloved annual holiday tradition for hundreds of thousands of Los Angeles-area residents and tens of thousands of visiting fans.

Back in July, organizers scrapped the Tournament of Roses Parade, an event dating to 1890 — including every year since 1945. Thousands typically camp out on the streets of Pasadena on New Year's Eve to secure the best spots to watch the parade, and the elaborate spectacle is also a national television fixture on the morning of New Year's Day.

The tradition-loving Rose Bowl had already changed with the evolution of college football's various playoff systems over the past two decades. The game was no longer guaranteed its preferred annual matchup between Pac-12 and Big Ten opponents, yet it remained among the most coveted postseason destinations for teams across the country.

This matchup would have been among the biggest in the stadium's history, too.

Notre Dame has played in the Rose Bowl only once: In 1925, legendary coach Knute Rockne and his Four Horsemen beat coach Pop Warner and Stanford to complete an unbeaten season.

Alabama's first bowl game was the 1926 Rose Bowl, and the Tide played in six early editions of the game. They haven't been back in the official Rose Bowl game since 1946, although they beat Texas on Jan. 7, 2010, in the BCS National Championship Game at the Rose Bowl stadium.

The decision to move the game was not unexpected, and it was driven primarily by the objections of the contending schools to flying across the country to play without fans.

“I love the Rose Bowl!” Kelly said during a television interview with ESPN on Sunday, emphasizing his complaint was about the inability for players' families to watch the game.

In the end, Clemson was assigned to the Sugar Bowl semifinal, while Kelly's team will have families in the stands in Texas in a game between two of the most storied programs in college football, pitting the national championship favorites against the final addition to the four-team playoff.

Alabama (11-0) won the SEC and rolled through its schedule with another high-powered season under coach Nick Saban, who is chasing his sixth national championship with the Crimson Tide. They topped the CFP rankings from start to finish this season after missing the playoff last year for the only time since the system began, capping their perfect season by beating Florida 52-46 in the conference title game Saturday.

“This team has done a phenomenal job all year long of handling disruptions, overcoming adversity (and) being resilient to various things that have happened,” Saban told ESPN. “They’ve really stayed focused. We told them early on that the team that handles the disruptions the best is the team that’s going to have the best chance to be successful in the end.”

Notre Dame (10-1) beat out Texas A&M for the final playoff spot, and the Fighting Irish will be major underdogs against the powerhouse Crimson Tide. Alabama famously routed the Irish 42-14 in the BCS National Championship Game on Jan. 7, 2013.

The Irish had been No. 2 in the CFP rankings for the past month, but their 34-10 loss to Clemson in the ACC title game put their playoff hopes in jeopardy, particularly because A&M won its final seven straight SEC games. Notre Dame’s loss to Clemson snapped its 16-game winning streak, the longest in the FBS.

The playoff committee still chose the wildly popular Irish for the opportunity to be a huge underdog against Alabama. But instead of a week amid the pomp and pageantry of the Rose Bowl, the teams will spend their semifinal week in Texas, after an abbreviated stretch of postseason preparation around the Christmas holiday.

Saban will give his players three days off for Christmas before they resume work, saying he “didn't have the heart” to keep players away from their families.

Southern California’s coronavirus infection rate, while critical, is actually better by percentage of infected population than the situation in Tarrant County, where AT&T Stadium is located.