Albania heads to polls after a bitter political fight 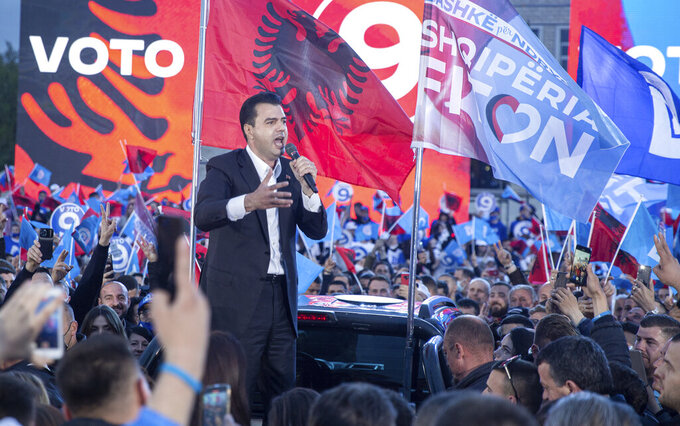 Supporters of the Democratic Party waving Albanian and party flags participate in the political rally in capital Tirana, Albania on Friday, April 23, 2021.Albania holds parliamentary elections on Sunday amid the virus pandemic and a bitter political rivalry between the country's two largest political parties but that will serve as a key milestone in the country's next step toward European Union membership. (AP Photo/Visar Kryeziu)

Albania, with its population of 2.8 million, has been a NATO member since 2009 and is looking forward to launching full membership negotiations with the European Union later this year. The voting is considered as a key milestone in that path.

But the political confrontation is severe.

The new laws follow recommendations from the Organization for Security and Cooperation in Europe, which has monitored the country’s post-communist elections — always marred by irregularities.

It guarantees free and fair elections, focusing on voters’ electronic identification, partly depoliticizing the electoral commission and a pilot project on full digitalization of the voting and counting process.

Some 3.6 million eligible voters, who include many Albanian residents in other countries, will elect 140 lawmakers among some 1,800 candidates from 12 political parties or coalitions and independent candidates.

No early or postal voting is allowed in Albania.

It's unclear whether voters with COVID-19 will venture out to cast their ballot. By law they are obliged to stay isolated at home, but election commissioners won't test voters before they enter the polling station.

The opposition has complained, too, because Albanians living in neighboring Greece and North Macedonia are practically excluded from voting as they would need to be quarantined for two weeks upon entering the country.

CAMPAIGNING AMID A PANDEMIC

Albania has seen a significant fall in new daily virus cases in the past week, despite political rallies around the country.

Also more than 380,000 people have been vaccinated and the government is hoping to reach half a million during May, creating better conditions ahead of the summer tourist season.

The governing left-wing Socialist Party is stressing its work to improve health care, making political capital from ceremonies to mark the opening of a new hospital or the renovation of others.

Rallies of the main opposition center-right Democratic Party have openly defied rules on gatherings. The Socialists have tried to respect them better, gathering supporters sitting apart in soccer stadiums, but nevertheless has not been able to keep them apart all the time.

Albania has enforced an overnight curfew, no group gatherings and mandatory mask wearing.

Prime Minister Edi Rama of the governing Socialists, who are seeking their third consecutive mandate, aims to turn Albania into a “champion” in various sectors.

“Leaving behind the pandemic and the consequences of the earthquake and bringing Albania up” will be his main issues of the post-election efforts. Albania saw a 3.31% drop in GDP in 2020 due to the pandemic, while an earthquake in northwestern Albania in November 2019 killed more than 50 people and caused substantial economic damage.

Lulzim Basha of the Democratic Party is repeating accusations of government corruption and links to organized crime. He is pledging lower taxes, higher salaries and more social financial support.

“Change is necessary, vital (after) eight years of stalemate,” he said at a meeting with a farmers association on Thursday.

Basha declined to be interviewed by The Associated Press.

Confrontations between government and opposition supporters have been a problem, culminating on Wednesday with the killing of a governing Socialist Party supporter, which police say occurred during an argument between supporters from opposing political parties.

Incumbent Prime Minister Edi Rama claims his Socialists will win 74-78 seats, allowing them to continue governing on their own. He says he will not form a coalition with others if they don’t win the required 71 seats and he will “leave the burden on others,” hinting he will resign from the party leadership.

The Democrats’ Basha has resisted answering questions about whether he would resign if fails to win in Sunday’s polls.

President Ilir Meta has turned into a firebrand government opponent, accusing Rama of running a “kleptocratic regime,” bungling its pandemic response and delaying the country’s integration into the European Union, as well as concentrating all legislative, administrative and judiciary powers in his hands.

“I see ahead a democratic turnover,” Meta told the AP. “On April 25, the Albanian people re-take sovereignty and control of the political class.”

Meta said he would resign if Rama’s Socialists win “in a democratic way” a majority in the 140-seat parliament.

The European Union has made holding an election in line with international standards a condition of starting full negotiations to admit the small Balkan nation as a member.

Brussels gave the green light to Albania and North Macedonia last year for the launch of full membership negotiations, but no date has been set for the first meeting.

EU Ambassador to Albania Luigi Soreca told the AP it is up to member states to decide, likely in June, whether to hold the first inter-governmental meeting with Albania.

“The conduct of this election is crucial for the next step of the Albanian path on integration into the European Union,” said Soreca.