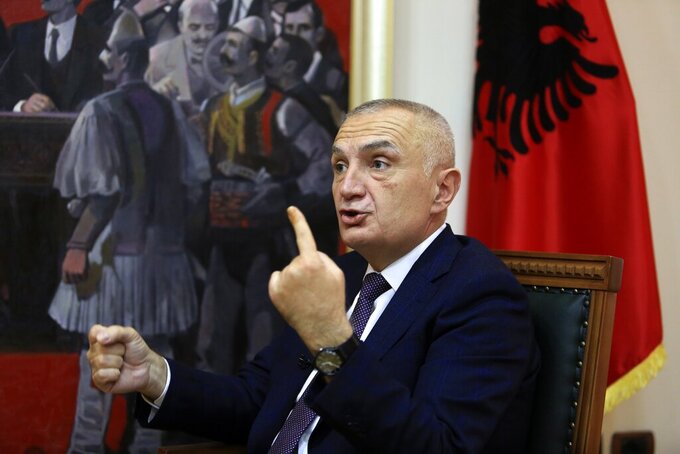 Albanian President Ilir Meta speaks during an interview with the Associated Press in Tirana, Albania, Wednesday, April 21, 2021. Albania’s president waded deep into the country's parliamentary election campaign Wednesday, accusing the left-wing government of running a “kleptocratic regime” and bungling its pandemic response. In an interview with The Associated Press, Ilir Meta also said he would step down if Prime Minister Edi Rama's Socialists — who are leading the main opposition conservatives in opinion polls — win Sunday's vote. (AP Photo/Hektor Pustina)

TIRANA, Albania (AP) — Lawmakers in Albania agreed Friday to form an investigative committee to decide whether to impeach the country’s president, whom the governing Socialist Party accuses of violating the constitution by taking political sides in an election last month.

The 140-seat Parliament voted 97-6 in favor of appointing a nine-member committee to investigate President Ilir Meta “for grave and flagrant violation of the constitution.”

Socialist parliamentary group leader Taulant Balla said that Meta failed in his constitutional duty to guarantee national unity by siding with the opposition in the runup to the April 25 election. The Socialists won 74 of the seats in Parliament, enough to form a Cabinet without entering a coalition with other parties.

“Our goal will be securing back trust in the state’s number one person,” Balla said.

In response, Meta said he would not recognize the parliamentary committee's validity.

“The institution of the president of the republic will not recognize any anti-constitutional or illegal decision or activity of the one-party acting assembly and decisions of any other doll institution of this kleptocratic regime,” a statement read by the president's spokesman, Tedi Blushi, stated.

Albania's presidency is largely ceremonial but carries some authority over the judiciary and the armed forces. The role is also generally understood to be apolitical, but Meta has regularly clashed with Rama’s government.

The left-wing Socialists moved quickly to establish the committee. The current session of Parliament ends in July, although the national legislature technically remains functional until Sept. 9, when the new parliament elected in April i is scheduled to convene.

Impeaching Meta requires a two-thirds majority in Parliament and approval from Albania's Constitutional Court, which would decide if a vote by lawmakers should stand if the president must leave office.

Meta started his political career with the Socialist Party, but later left it to form the smaller left-wing Socialist Movement for Integration, or LSI. In 2017, when he was elected to a 5-year term as president, his wife became the LSI's leader.

Meta has said he plans to rejoin the LSI after his presidential term ends in July 2022.