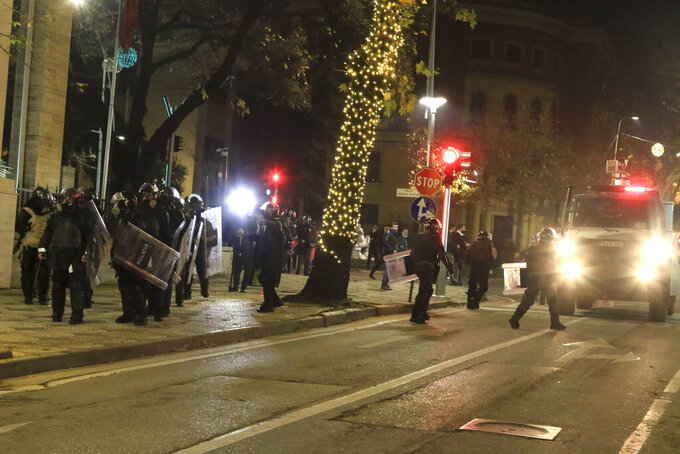 TIRANA, Albania (AP) — Albanian police swiftly dispersed a smaller crowd of demonstrators Saturday as part of their ongoing protests this week after a fatal shooting by police enforcing a coronavirus curfew.

A higher police presence, including water cannon trucks, had surrounded the main government building of Prime Minister Edi Rama and other ministries in the capital, Tirana.

In significantly smaller numbers during the fourth night of protests, demonstrators marched toward the interior ministry and then Tirana’s police department shouting “Down with communists,” and “Rama go.” Some minors among the protesters destroyed traffic signs along the streets.

Police fired tear gas at the demonstrators, and some protesters were detained.

Albanians have defied a ban on public gatherings because of the pandemic, and have clashed with police in recent days, mainly in Tirana. The protests follow the death of Klodian Rasha in the capital during curfew hours early Tuesday. Police say he ignored officers’ calls to stop, and ran away.

A police officer has been arrested and is being investigated for “homicide in excess of necessary self-defense.”

During the four days of protests, hundreds of people have thrown stones, flares and firecrackers at police guarding public buildings, including Rama's offices. They have damaged traffic lights, signs and other objects in the city, including in Tirana's main Skanderbeg Square. Officers have responded with tear gas and water cannons.

In the nearby western port city of Durres, demonstrators concluded their protest with fist-bumping with officers in front of a police station.

Rama has apologized for what he called the “inexplicable and completely unreasonable” shooting of Rasha, and his interior minister resigned Thursday.

But that failed to dampen the protests, which spread to other cities.

Albanian politics has been mired by infighting since the shooting, with Rama accusing opposition politicians, including President Ilir Meta, of inciting the violent protests. The center-right main opposition Democratic Party, meanwhile, has blamed Rama for Rasha's death and is pledging that it will topple the prime minister in the April parliamentary election.

During the first three days of violence, police arrested 87 people, and a total of 246 have been charged with holding an illegal protest during the pandemic, as well as with arson and public order breaches.

Authorities say 25 police officers and four protesters have been injured.

The U.S. and the European Union have called on Albanian political parties to exercise restraint.

The daily protests in Tirana have started at 6 p.m. (1700 GMT) so far and generally continue for a few hours with people trying to attack the main government building from different sides. Saturday's demonstration was shorter.