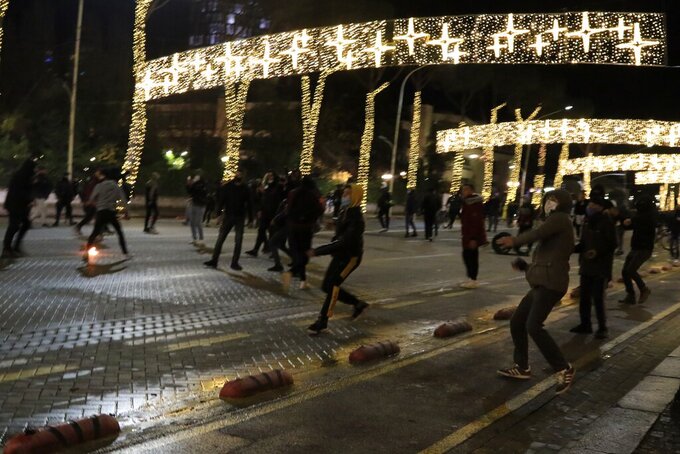 Protesters throw stones to riot police during clashes in Tirana, Friday, Dec. 11, 2020. Albanian demonstrators clashed in the third day on Friday protesting for the death of a 25-year-old man shot dead by a police officer. (AP Photo/Hektor Pustina)

TIRANA, Albania (AP) — The first peaceful protest in Albania's capital over the fatal shooting of a man by police enforcing a coronavirus curfew quickly faded away Monday following a strong police warning to avoid illegal gatherings because of the coronavirus pandemic.

In a significantly diminished number compared to previous rallies, only a few hundred demonstrators gathered at Tirana’s main Skenderbej Square, then walked toward Prime Minister Edi Rama’s office shouting “Down with the dictatorship.” They returned at the square peacefully.

Police mentioned “the concerning situation caused by the pandemic" in a statement, calling for everyone to respect lockdown measures set by health authorities. Those restrictions include a ban on public gatherings of more than 10 people, an overnight curfew, the mandatory use of masks and social distancing.

Albanians have defied a coronavirus ban on public gatherings and there have been clashes with police in recent days after Klodian Rasha was killed in Tirana during a curfew early Tuesday. Police say he ignored officers’ calls to stop and ran away. A police officer has been arrested and is being investigated for “homicide in excess of necessary self-defense.”

In a conciliatory move, the government decided on a monthly pension for Rasha’s father.

Demonstrators have hurled stones and other objects against police and at government buildings and destroyed street traffic signs. Police have responded with tear gas and water cannons.

Prime Minister Edi Rama has apologized for what he called the “inexplicable” shooting of Rasha, and his interior minister resigned Thursday.

But that hasn't placated the demonstrators, who are now asking for the resignation of the police chief and the release of those who have been arrested in days of clashes with police. Smaller protests have been held in other cities.

Scores of people have been arrested in five days of protests and almost 300 have been charged with holding an illegal protest during the pandemic, as well as with arson and public order breaches. Authorities say 28 police officers and at least four protesters have been injured in the clashes.

The U.S. and the European Union have urged Albania’s political parties to exercise restraint amid the protests.

Reacting to the detention of two journalists covering protests in recent days, Brussels said “it is crucial that journalists in Albania are able to do their job free of any threat of violence, harassment and intimidation, so that citizens have access to all information.”